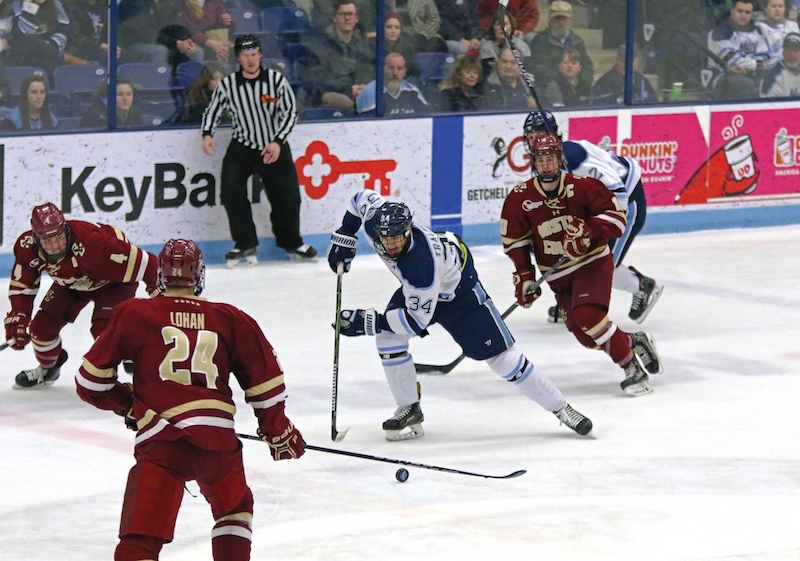 In net for the Black Bears was first-year Jeremy Swayman. Across from him was second-year goaltender Joseph Woll.

It was first-year defenseman Veli-Matti Tiuraniemi who opened the scoring for Maine 19 seconds after the Black Bears killed off a penalty. Tiuraniemi beat Woll glove-side for his second goal of the season after receiving a cross ice feed from first-year forward Mitchell Fossier.

Just over a minute and a half into the second period, the Eagles knotted the game at one after first-year forward Logan Hutsko slipped one past Swayman. Not long after, Boston College took the lead after graduate student defenseman Kevin Lohan shot the puck through traffic, beating Swayman. With just over five minutes to go in the period, Lohan scored his second goal of the game, picking the top corner from the hash marks and extending the lead to two, making it 3-1 Eagles. The Black Bears applied some pressure late in the period, but couldn’t find a way to beat Woll.

Swayman finished the night with 29 saves and six goals allowed. Woll finished with 32 saves, including 18 in the second period.

Maine and Boston College will play their final regular season games of the year on Saturday, Feb. 24 at the Conte Forum in Chestnut Hill.

The Maine Black Bears and the Boston College Eagles played their final regular season games of the year Saturday night on the Eagle’s home ice. With a final score of 1-2, the Eagles finished off the weekend sweeping the Black Bears.

Swayman was back in net for the Black Bears and Woll started for the Eagles.

Boston College got on the board first when second-year forward David Cotton carried the puck around the back of the net and placed it over Swayman’s pad to take the lead. The Eagles finished the period leading in shots 9-4.

Boston College extended the lead to two just under five minutes into the second period on the power play when third-year forward Christopher Brown took a pass from first-year forward Aapeli Rasanen and lofted it to the top left corner. Midway through the period, first-year forward Edward Tralmarks had the chance to cut the lead in half when he was awarded a penalty shot after being hooked on a breakaway. However, Woll was able to keep the Black Bears scoreless with a pad save. Maine was finally able to get on the board later in the second when second-year defenseman Rob Michael received a pass at the right dot from Fossier and put it through Woll’s legs.

Maine had a few opportunities in the third period but was unable to capitalize. After pulling Swayman on the power play with about 30 seconds left, the Black Bears had a 6-on-4 but weren’t able to beat Woll as Boston College went on to win.

Maine enters the Hockey East Tournament as the No. 6 seed and will host the No. 11 seed New Hampshire Wildcats. This is the first time the two teams have faced off in the opening round of the tournament. Maine holds a playoff record of 5-1-0 against New Hampshire in the four series they’ve previously played against one another. Maine got the better of New Hampshire in the regular season with a head-to-head record of 1-0-2 in favor of the Black Bears. This is the first time the teams will meet in the playoffs since 2004. The first playoff game will be Friday March 2 with a 7 p.m. puck drop.