#YouMaine: Nursing student is determined to help others through volunteering

Home /Culture/Profiles/#YouMaine: Nursing student is determined to help others through volunteering 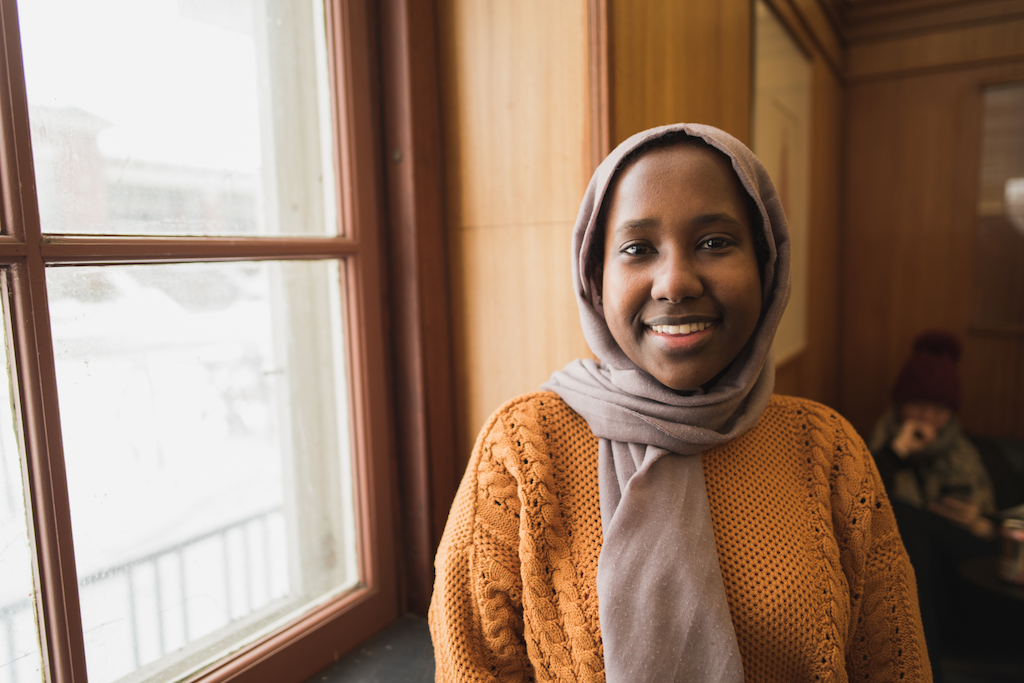 Mariam Ali has traveled all around the world, but until Jan. 12, she had never been to Baltimore, Maryland. That all changed when she was accepted into University of Maine Alternative Breaks volunteering group. Along with 10 other students, Ali traveled to Baltimore for eight days to care for two to four-year-old children at risk, as well as the city’s homeless community. The work consisted of spending about seven hours a day at a nursery and then going to a homeless shelter to give out dinner.

“It wasn’t a shelter where you just line up and they put the food on your tray,” Ali said. “It had set tables so you feel like you’re in a restaurant. They give you a menu so you have options for what you want. We actually served the people like waitresses. There were a lot of women and children but also a lot of men too.”

Throughout the eight-day trip, Ali experienced what she calls a bit of a culture shock. She saw poverty she had never seen in the United States.

“I felt like I wasn’t in the States. I was like ‘this really exists in another state?’” Ali said. “We don’t know how grateful we are where we’re living. I see homeless in Boston too but I don’t see that amount of homelessness.”

Boston is where Ali currently calls home, but she was born in Somalia and has lived in Egypt and Kenya. She has done similar missions to places like Brussels, Belgium. But nothing could have prepared her for some of her experiences.

“As we were driving we saw little kids not even older than 15 years old trying to scrape our windows just to get a few bucks,” Ali recalled. “Even the kids at the nursery and some of the words they were using. They knew about guns. The kids are at risk of being a product of their environment and we worked to change that. The feelings that you give them and they give you are what lasts.”

Ali is a second-year nursing student who transferred to UMaine after a year and a half at the Massachusetts College of Pharmacy and Health Sciences. Upon arrival at UMaine, Ali discovered the multitude of opportunities that the university offers in terms of volunteering.

“That’s why I fell in love with UMaine,” Ali said. “There’s just a lot of clubs to get involved in and make a difference.”

Ali’s drive to help others will not end with this trip. Her passion for it is evident when she talks about it. Her eyes light up and an infectious smile brightens her face.

“Right now I’m part of Partners For World Health, which is an organization started by a woman in Portland, Maine actually,” Ali said. “She was like ‘you know we waste so much hospital supplies,’ for example crutches and sterile gloves. Stuff that we waste but simple things that people around the world don’t have. So the organization reduces medical waste by sending it to people in need. They have a warehouse full of stuff hospitals didn’t use, that hasn’t been touched.”

“I’m already part of that organization but I want to travel with them at the end of the year to Senegal, because they go with a nurse practitioner, two nurses and like five other students,” Ali said.

Upon graduation, Ali is committed to using her education and training toward making the world a better place.

“I want to continue volunteering but narrow it down to how I can make a huge impact and what I’m good at,” Ali said.

To those who rarely leave the state of Maine, Ali says venturing beyond state bounds can be beneficial to recharging a person’s own zest for life in addition to helping others. She encourages people to do so.

“I recommend, honestly, getting out of Maine,” Ali said with a smile and a laugh. “Get away from Maine. There’s so much happening just within different states. There’s so much happening in terms of social issues. It will even have you re-evaluating your own life. You feel so grateful. Call your family and say ‘I love you, I’m so grateful to have you guys.’ You learn so much.”

10 Things to do to take advantage as a foreign student in the U.S.
Students seize opportunities at the annual Career Fair