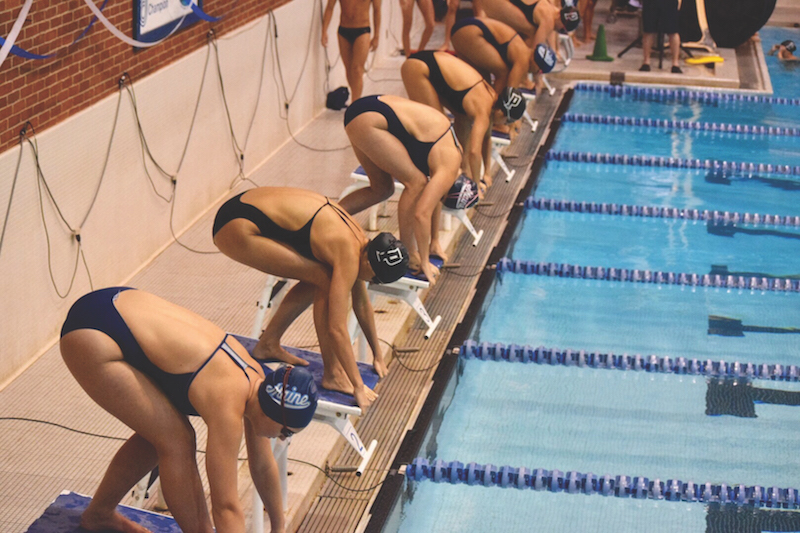 The University of Maine swimming and diving team competed in the America East championships starting on Thursday, Feb. 15 at the Sports and Recreation Center at Worcester Polytechnic Institute in Worcester, Massachusetts.

In the first men’s championship since the 2012-2013 season, Maine sat in third place with 365.5 points, trailing both the University of Maryland-Baltimore County and Binghamton University as of Saturday night. The Virginia Military Institute sat behind the Black Bears in fourth place.

Second-year Coulter Morrill, first-years Hayden Kasavicha and Andy Sprague, and fourth-year Alexander Penn willed the Black Bears to a third place finish in the 800-meter freestyle relay, finishing in 7:16.57. Maine would secure another third place finish in the 200-meter medley relay, as first-years Nick Gould, Jack McNamara and Jacob Ketch, and fourth-year Kevin Clyne finished in 1:37.38. In 3-meter diving, first-years Kyle Adams and Ben Sturgis finished in back to back placements, with Adams coming in seventh with a score of 223.1, while Sturgis took eighth with a score of 183.6.

Day two saw a school record fall in the 200-meter freestyle relay. Sprague, Ketch, Coyne and second-year Justin Hafner finished the race in 1:23.46, breaking the previous record of 1:23.89. Sprague picked up 9 points in the 50-meter freestyle with a ninth place finish of 21.1 seconds.

First-year Kazu Temple stole the show for the Black Bears on day three by breaking another school record, finishing the 100-meter breaststroke in 56.66 seconds. This time beat the record set by Nathan Richard back in 2007 by just four hundredths of a second. The fifth place finish gave Maine another 14 points towards their overall score. Maine would pick up another 12 points on a seventh place finish by Morrill in the 200-meter freestyle. The day would end with a third place finish in the 400-meter medley relay from Sprague, Temple, Clyne and fourth-year Conor Mayhew, finishing in 3:26.21.

After failing to have a diver reach the finals, the 800-meter freestyle relay team put the Black Bears on the board. Third-year Shayla-Rose Kleisinger, fourth-year Juliana McDonald, first-year Emily Lund and second-year Ines Khiyara put together a fourth place finish for 30 points. Second-years Emma Blair and Sabrina Nuttall teamed up with fourth-years Victoria Kingston and Emily Borger for a fifth place finish for another 28 points.

Second-year Lynsie Russell pulled out an eighth place finish in the “A” final of the 200-meter individual medley, finishing with a time of 2:08.56, garnering 11 points for the team. First-year Caroline Strolic finished 12th with a time of 2:09.34.

The Black Bears picked up 40 points in the 50-meter freestyle, when Borger, McDonald and Blair finished fifth, sixth and seventh respectively, and second-year Kate Pontius finished 16th for the last point of the event.

Borger, Blair, McDonald and Nuttall capped off the day with a second place finish in the 200-meter freestyle relay.

Day three started with the 400-meter individual medley, Russell, Khiyara and Strolic provided the scoring for Maine with finishes of 10th, 14th and 15th respectively.

Kingston gave the Black Bears their best individual showing on the meet with a fourth place showing in the 100-meter butterfly, finishing the race in 56.75 seconds. Pontius finished 13th with a time of 58.83 seconds.

The Black Bears would wrap up the day with a fifth place finish in the 400-meter medley relay, thanks to third-year Megan McGillivray, Nuttall, Kingston and McDonald.

The America East finals will wrap up on Sunday, Feb. 18.

Men and Women Swim Teams Wrap Up at America East

The University of Maine swim team wrapped up action at the America East Championships on Sunday, Feb 18. The men finished in third with a team score of 576.5  and the women finished fifth with a score of 402.

On the men’s side, Temple and third-year Sean Driscoll both broke the school record in the 200-breaststroke set by Richard back in 2007. Temple’s 2:04.23 and Driscoll’s 2:04.49, which bested Richard’s 2:05.67, were good for fourth and fifth places respectively. Morrill and McNamara also scored in the event with an eighth and a ninth place finish.

Maine would take 24 points in the 200-yard butterfly, thanks to a sixth place finish by Sprague and an eighth place finish by Cleworth. In the 1,650-yard freestyle, second-year Alexander Watson and first-year Andrew Plese finished in back to back positions, at 17:14.28 and 17:28.05 respectively.

The Black Bears would end the scoring in the 1-meter diving, where Adams and Sturgis finished seventh and eighth with scores of 246.9 and 184.15 respectively.

The University of Maryland Baltimore County won the meet with 1,113 points, followed by Binghamton with 817.5 points. The Virginia Military Institute would bring up the rear with 358 points.

The women came firing out of the gates, having three swimmers finish the 100-yard freestyle finish in the top eight. McDonald took fifth place with a time of 51.78 seconds. Borger and Blair finished seventh and eighth respectively, with times of 52.05 and 52.12 seconds.

Russell took home sixth place in the 200-yard backstroke with a time of 2:02.93. In the 200-meter breaststroke, Maine had four swimmers clustered between ninth and 13th, as Nuttall and Caroline Strolic took ninth and 10th, while second-year Emma Blackdeer and Khiyara took 12th and 13th.

The day ended with the 400-yard freestyle relay team of McDonald, Borger, Blair and second-year Rita Chen breaking the school record of 3:28.31, finishing in 3:28.13.

The University of New Hampshire won the meet with a team score of 794. Maine would finish ahead of just the Virginia Military Institute, who finished with 130 points.

*Editor’s note: This article has been edited to reflect the properly identify the athletes as well to provide coverage to Sunday’s results. Kevin Clyne was part of the record breaking relay team. Sunday’s results were not part of the original article*