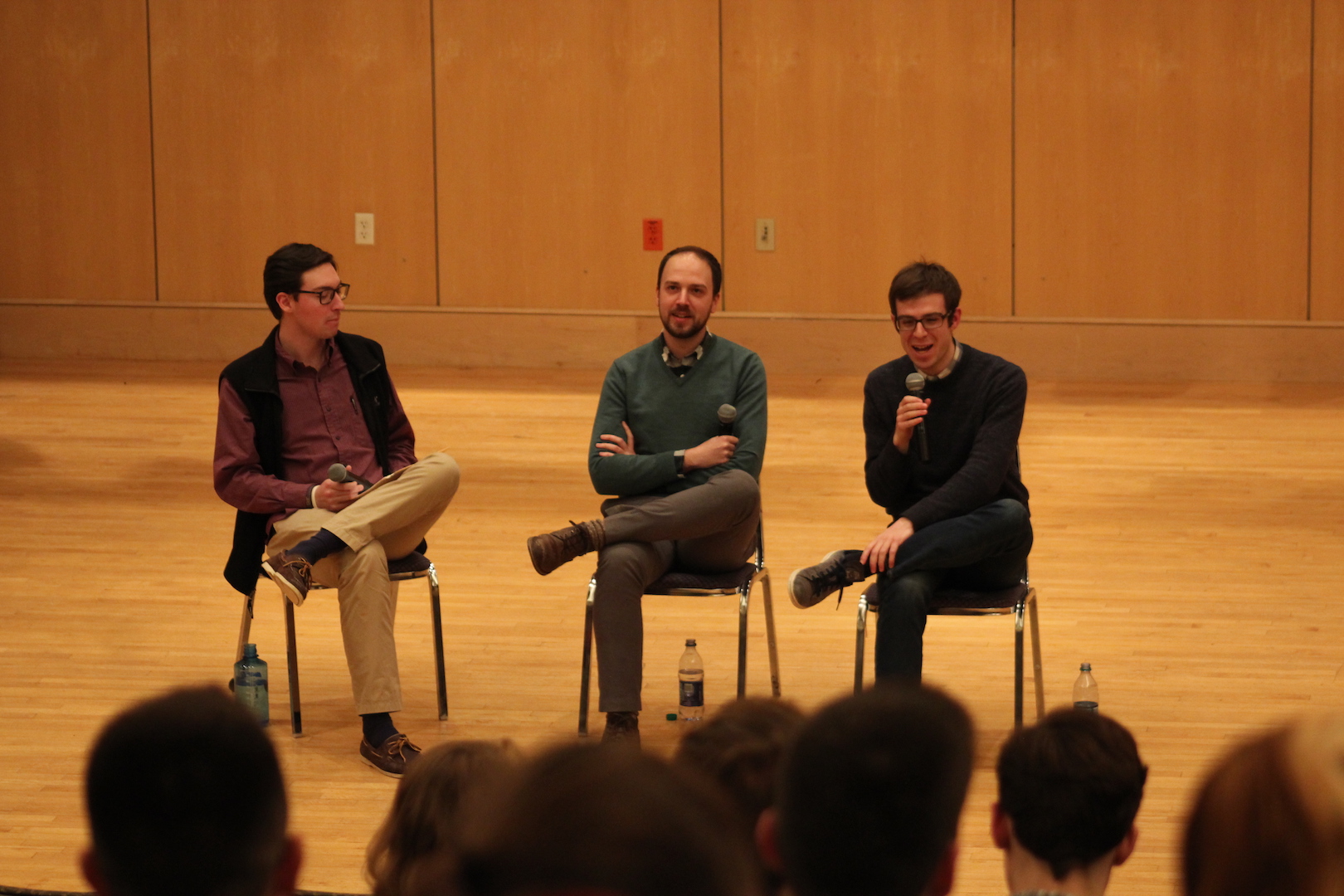 Writers for the popular satirical “news” site, The Onion, chat to students in Minsky on Wednesday. Photo by Liz Theriault, Contributor

The University of Maine Student Government hosted writers Mike Gillis and Matt Spina from The Onion — a popular satirical news website — on Thursday, Feb. 15 in Minsky Hall. The writers discussed everything from the Trump administration during the era of fake news to their writing process for making the absurd and ludicrous headlines for which The Onion is known.

Founded in Madison, Wisconsin in the 1980s, The Onion—which prides itself on being “America’s Finest News Source”—publishes articles with headlines such as “Study Reveals: Babies are Stupid” and “Joe Biden Shows Up to Inauguration with Ponytail.”

Hailing from Falmouth, Maine and a graduate of Dartmouth College, Gillis is a senior writer at The Onion. His co-presenter, Spina, of New Jersey, who discovered upon getting his Master of Arts in history at Loyola University Chicago that “doing comedy is way more fun” than pursuing a career in academia, is a sports and staff writer at the website.

The writers were met by a warm audience. Laughs were heard when Gillis said, “There’s a level of extreme self-consciousness in the writer’s room, partially because we’re all introverted losers trying to make up for a deep sense of humiliation from high school,” but then seriously added, “In the [writer’s] room, we have very robust discussions about what we should be covering … Essentially, whatever late night talk shows are covering, we try to stay away from. We try to take a step back and think of what is actually important about [an] issue and why it is being talked about.” One of Gillis’ breakthrough headlines at The Onion was titled, “Teenage Girl Blossoming into Beautiful Object.”

In the wake of the Parkland, Florida school shooting that took place earlier this week, The Onion ran a controversial headline titled: “‘No Way To Prevent This,’ Says Only Nation Where This Regularly Happens.” The writers discussed the publication’s approach to tragic events and emphasized that their coverage is oriented more toward the sentiment behind media coverage of such events.

The satirical news site continues to maintain its status as such. “What The Onion does with every headline is create a tiny comedic universe … Whereas a place like the Daily Show or a late night show — their jokes are always based in reality,” Gillis said. “And in the era of the president calling news outlets like CNN and The New York Times ‘fake’,” he continued, “we never want to be mistaken for fake news.” Certainly, hosting writers from The Onion provided talking points through which the UMaine community could discuss the current administration and media literacy.

When asked why Student Government decided to host the satirical news outlet, Vice President of Student Entertainment Jared Dumas said, “We were looking for media companies to send guests because of the current political culture, and The Onion is perfect, because it caters to that communication and political science community and still gives insightful opinions on a lot of topics.”

Gillis and Spina ended the night by providing words of encouragement for students preparing to leave college and enter the workforce. Despite Spina’s words that “basically, you’re not going to have friends after college,” Gillis says he can’t remember a time when he was unhappy at The Onion and encouraged students to keep working toward their goals.

10 things to do if you are considering joining Greek Life
#YouMaine: Emma Freeman keeps her childhood excitement alive