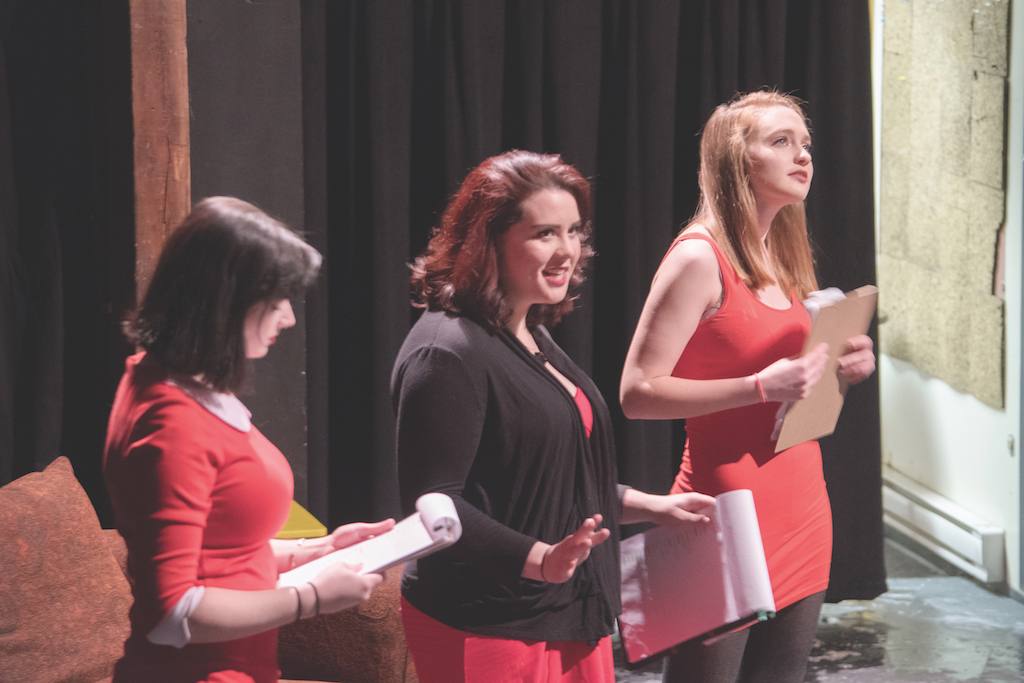 Students perform at the Vagina Monologues hosted by the UMaine Feminist Collective on Feb. 8 and Feb. 9 in the Cyrus Pavillion. Photo by Evan Loignon, Staff.

On Feb. 9 and Feb. 10, University of Maine students and community members gathered in the Al Cyrus Pavilion to watch the Feminist Collective’s production of “The Vagina Monologues.’

During the month of February, activists in communities and on college campuses around the world are encouraged to host benefit productions of “The Vagina Monologues.” In an effort to raise awareness about violence against women and girls and raise money for local beneficiaries, no royalty fees are charged for the production and all proceeds are to be donated. In addition to ticket sales, chocolate vulva pops were sold at the door to raise funds for Rape Response Services, Partners for Peace and the Women’s Resource Center on Campus.

Written by Eve Ensler, The Vagina Monologues speak openly and directly about womanhood and the female and non binary sexual experience through a wide range of perspectives. While watching, the audience hears from characters diverse in age, ethnicity, identity and experience.

Some of the monologues discuss topics through comedy and drama. In “My Angry Vagina” performed by a fourth-year student Jennifer McArthur, one woman expresses her comical concerns with feminine hygiene products and the tools used by OB-GYNs. Others give the audience insight into stories of tragedy and pain. The monologue titled “My Vagina Was My Village,” performed by fourth-year student Calla Williams, tells a story composed from the testimonies of Bosnian women who were subjected to rape camps.

During ”Reclaiming C—,” third-year student Olivia Pennington walked through the rafters while illustrating that the word despite its history of disconcerting connotations, can be an empowering word when reclaimed. Cassandra Dechaine, a fourth-year student and a co-director of the show, explained the many different types of moaning in the monologue titled, “The Woman Who Loved to Make Vaginas Happy,” which depicts a sex worker discussing her career in detail.

Dispersed between the individual monologues, a chorus of women would recite answers to questions Ensler asked during the interviews, which inspired the play. Fourth-year student Sarah O’Malley, acted as the narrator, introducing the show and presenting pertinent facts intermittently.

Third-year student Emma Hutchinson initially became involved in last spring’s production when a few extra cast members were unexpectedly needed at the last minute. She enjoyed the experience so much, she knew she wanted to participate again this year.

“I’m not a member of the Feminist Coalition, nor am I a part of the Women’s Resource Center on campus, but this production gives me a chance to get closer to these girls. It also provides a chance for me to help give back to this community,” Hutchinson said.

“These kinds of programs are very important on campus because it opens up a wide diversity of experiences to many people who may not be aware of them. It also gives students a chance to fundraise for some necessary resources on campus and around the Orono/Bangor area such as the Women’s Resource Center and the Mabel Wadsworth Center,” Hutchinson said.

This year, Hutchinson performed a monologue titled “The Flood,” which was written based on Ensler’s interviews with women between the ages of 65 and 75. The monologue centred around a woman’s first passionate kiss, and how her surrounding embarrassment affected the rest of her life.

“The Vagina Monologues are popular because of the range of emotions they use to connect with the audience,” Hutchinson said. “Some are very funny while other times, we’ve made the audience cry. People want to come back because each production is unique in the girls performing and which monologues are done.”

If you want to know more about events like this, or want to find out when The Vagina Monologues will be back, follow the University of Maine Feminist Collective’s Facebook page.