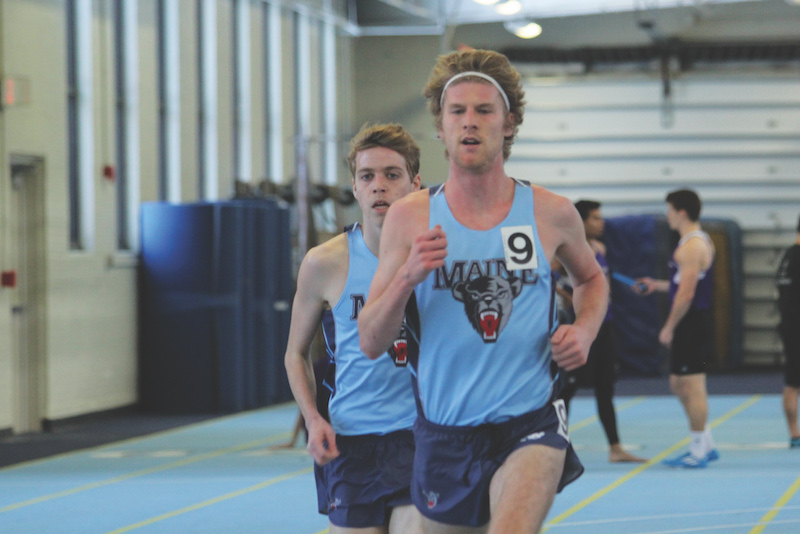 The University of Maine men and women’s track team was back in action at the America East championship meet on Friday, Feb. 23 and Saturday, Feb. 24 in Boston. The men took home sixth place in the meet with 55.5 points, while the women finished eighth with 33 points.

Day one for the men saw the team garner all but one of their 19 points in just two events: the long jump and the pole vault. First-year Elijah White took home runner-up honors in the long jump with a personal best 7.05 meters, giving Maine eight points as a team. Second-year Troy Davis also scored in the event, as his 6.75-meter jump was good enough for sixth place.

Second-year Alecsander Wortman and third-year Devin Burgess finished back-to-back in the pole vault with 4.65 and 4.5 meters respectively, finishing in fifth and sixth place, and giving the Black Bears seven more points. Wortman would put up a personal best, while tying his brother, UMaine graduate Tristan Wortman for the third-highest jump in UMaine history.

The distance medley relay team of second-years Cooper Nelson and Branden Kuusela, third-year Tucker Corbett and fourth-year Logan Moses rounded off the scoring with an eighth place finish of 10:31.62.

Day two featured redshirt fourth-year Jacob Johns finishing second in the mile at 4:07.46, less than a second behind Grant Hauver, a second-year at UMass Lowell.

On the women’s side, Maine tallied 14 points on day one, courtesy of the throwing events. Fourth-year Rachel Bergeron led the charge with a runner-up finish in the weight throw, finishing with a 17.03-meter toss. First-year Alice Barnsdale finished right behind Bergeron, picking up another six points on a third place finish a 17.00 meter toss. Both would earn all-conference honors for their finishes.

Day two showcased third-year Lauren Magnuson, who finished in second place in the 200-meter dash with a time of 24.49 seconds, the second fastest time in that event in program history.

Magnuson was also recognized as the America East Elite 18 recipient for track and field, awarded to the student-athlete with the highest cumulative grade point average at each of the finals sites for all 18 sports that America East competes in. She was recognized for her 3.96 GPA.

Both teams will be down in Boston on Sunday, Feb. 25 for the Last Chance Meet in order to qualify for nationals.