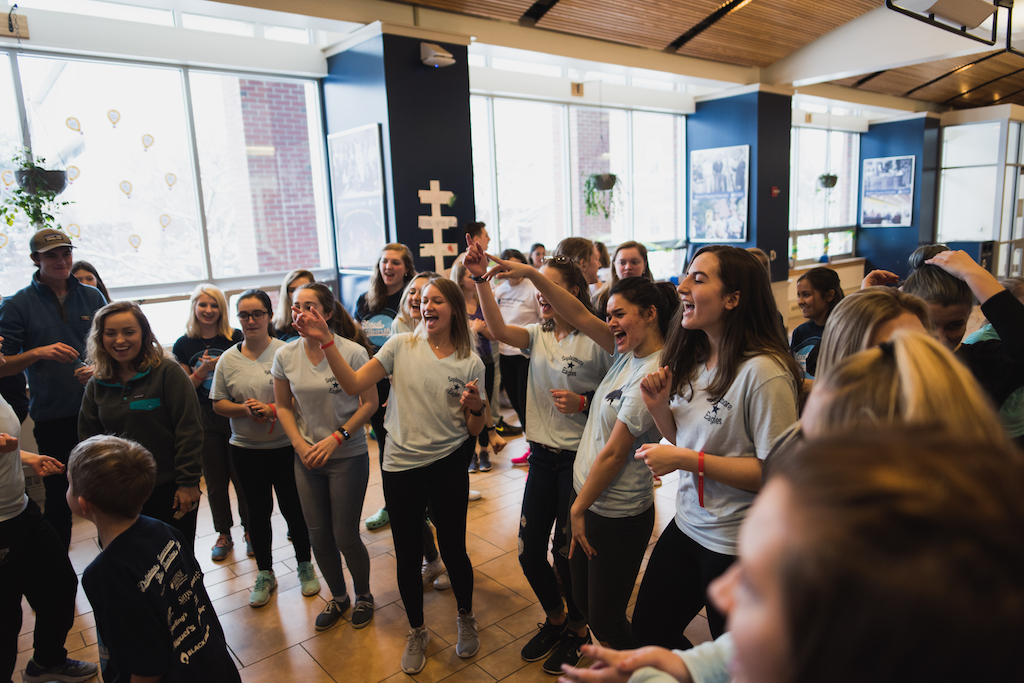 On Feb. 10, scores of students came together “For The Kids” at the annual Black BearTHON, UMaine’s 12 hour dance marathon to raise money for childhood cancer research. Editor Maggie Gautrau.

This weekend, the University of Maine hosted the seventh annual Black BearTHON, a 12-hour dance marathon to raise money and morale for the Eastern Maine Healthcare Systems (EMHS) foundation. Members of the UMaine community danced from 1 p.m. on Saturday till 11 p.m. with various activities spread throughout the Memorial Union including crafts, carnival games and a bounce house. The event was planned to go until 1 a.m., but due to a winter weather advisory it concluded earlier than anticipated.

Eastern Maine Medical Center (EMMC) is one of 170 hospitals in North America sponsored by the Children’s Miracle Network. According to their website, the organization, founded in 1983, fundraises for hospitals that provide 32 million treatments per year to children in need of medical care. The dance marathon, previously held in the New Balance Student Recreation Center, is UMaine’s way of supporting children in the community who require care.

“We’ve had some growing pains,” Rebecca Hatt, a third-year business student and this year’s president of Black BearTHON, said. Over the last seven years, Black BearTHON has changed its name and its location, but the goal has stayed the same. “It gives the kids a night to just be kids and not have to worry about hospital visits,” Hatt said.

Hatt was inspired to get involved in Black BearTHON because of her niece, who has spent time in a Children’s Miracle Network hospital, but her history with community service began in high school. During her time at Maine School of Science and Mathematics in Limestone, Maine, Hatt participated in service projects through Key Club that fostered her desire to give back.

“I think it is important for the UMaine community to come together as one Black Bear nation,” Hatt said. ”It doesn’t matter what letters you wear or what organizations you’re a part of. This is the one day the campus can come together and celebrate the kids in our community.”

During the opening ceremony, the sponsored children in attendance were introduced by Austin Steward, a third-year bioengineering student, as they ran through a crowd of cheering participants. The children represented a wide array of those impacted by the Children’s Miracle Network, ranging in age from preschool to high school from across eastern Maine.

Robert Dana, Vice President for Student Life and Dean of Students, congratulated participants on their involvement and expressed his pride in the Black Bear community. “One thing that distinguishes every Black Bear I’ve ever known is that the passion never gives up and fatigue never gives in,” he said. “What makes us a better society than to think of people outside of ourselves?”

Following Dana’s speech, sponsored child Noah Tibbetts, 13, of Brewer, Maine shared his story. He spent the beginning of his life receiving treatments at EMMC and Boston Children’s Hospital, and now spearheads fundraising campaigns for the Network. His work has included efforts such as “Nickels with Noah,” a fundraiser at Brewer Community School in 2015 that enabled him to donate $14,634 to the EMHS Foundation, according to 2016 article from the Bangor Daily News.

Micheal Stinson, a fourth-year early childhood education student, danced with her sorority, Pi Beta Phi. Her favorite part of the evening was the opening ceremony. She loved hearing every child’s story and getting to know them throughout the evening.

“I’ve always had a passion for working with children; there’s just something so amazing about seeing a child learn and grow,” Stinson said. “It’s actually very cool, the mother of our miracle child is not only an alum here at UMaine, but she’s an alum of our Pi Beta Phi chapter here as well.”

Collectively, Pi Beta Phi raised $3,696 for EMHS. Stinson says Pi Beta Phi raised funds by spreading their enthusiasm for the cause to those around them. Tom Roerden, the Philanthropy Chair of Alpha Gamma Rho, discussed the tactics used by their team to crowdfund.

“We reached out to people through social media like Facebook and Twitter to get help from family and friends. We also sometimes used Instagram, posting photos and sharing the link in our bios,” Roerden said.

The goal of the event was for every participant to raise $152, corresponding to the 152 years UMaine has been established. Over the course of the night, an additional goal for each individual was to raise $29, one dollar for each child currently in the hospital. As of Sunday morning, over 600 registered participants raised a total of $34,157 for the EMHS Foundation.

Sometimes you just feel “Terrible, Thanks for Asking”
UMaine Dungeons and Dragons Extends Beyond Daggerford