What to expect in softball 2018, an interview with Coach Coutts 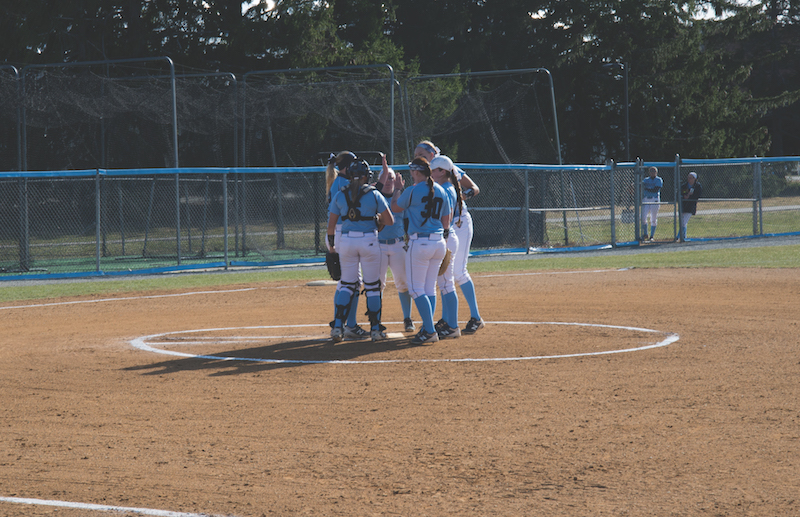 The Maine infielders huddle around the pitcher's mound before the inning starts. File photo

Matt Hammond: “You guys are still competing very well, killing it hitting wise. I see that was an improvement from past years.”

Coach Mike Coutts: “Last two years we’ve played in the championship game. We won the championship two years ago, you know we don’t let our weather determine what we do or not. It’s a challenge, we can’t change it, it is what it is. We kind of use it as something to help motivate us. We don’t let that [weather] be an excuse for us.”

MH: “You guys have eight graduating seniors this year, you guys just got 10 recruits there. What were you looking in those people characteristically?”

CC: “The first thing that attracts us to them [recruits] is how they are academically. They have to be really good academically. We try to get kids who are good students first because it just makes recruiting them easier. Then obviously then you look at their character and what kind of skill they have. Just kids that are athletic and versatile that can play multiple positions that are good athletes and so forth. You know the reality is we’re not getting bluechip players, they’re going to the Power Five schools. So we look for girls who are good athletes that we can turn into good softball players. That class we have coming in is a really good class and we’re anxious to get them here but we gotta get through this year first, so we’ll worry about them next fall.”

MH: “I think academics is a good precursor to a person’s personality and what they’re going to get into. That’s a good marker of their work ethic.”

MH: “I saw you even had the highest fall GPA in 29 years, that’s something to hang your hat on already.”

CC: “Absolutely, we expect a lot out of them. We expect a lot of them on the field and off the field. We’re proud of the fact that we try to be champions in everything we do. It makes being able to go to the field everyday fun.”

MH: “The team has been posting double-digit win totals since you’ve become head coach, what would you consider your philosophy and direction?”

CC: “Just holding the kids accountable. Making them realize they can accomplish so much, and it’s about developing strong females that have confidence in a family atmosphere. Being accountable to each other, being selfless. We spend a lot of time on our culture and chemistry. It’s part of practice everyday. It’s probably that along with the mental game. It’s probably 15-20 minutes we work on those two things before we even pick up a ball. It’s nice to be around people who are positive people who are givers. We always talk about being the greatest teammate ever and what that means. If we can get all of those things in line, then the playing piece becomes an easy piece. They’ve been good, they’ve embraced it. More evident than last year when we went to the tournament and had to suspend a couple of players and we went to the tournament without our starting catcher and one of our pitchers and still got to the championship game. You don’t do that if you don’t have good culture and good chemistry, and kids that want to play for each other. I was just as proud of them as I was of the team the year before that won the championship. It’s all about the girls, getting them responsible. I played here at Maine, I coached baseball here at Maine. I had an unbelievable experience and I want them to have the same thing I had.

MH: “So Maine’s currently tied for second in a preseason poll, do you pay any attention to that?”

CC: “No, you know last year we were picked first. I think it just tells you that your program was respected by people, not that you thought you were gonna win or anything. It told us that our program is in a good place. You know we came in second, I think it’s another indication that the program’s going in the right direction and we’re in a good place.”

MH: “Last year’s pitching was great, ERA was low. What do you think your wife’s [Coach Lynn Coutts] been focusing on with pitchers going into this season?”

CC: “Lynn and Jordan [Fitzpatrick] are just getting the girls to compete. We have two freshmen coming in this year who haven’t played in college, the importance of locating balls. Getting your screwball in a certain spot, your rise ball here, your curveball there and understanding you’re not gonna be perfect. You’re gonna get hit. You’re gonna leave a ball over the plate, someone’s gonna crush it. You’re probably not accustomed to that. So it’s just more about understanding how the college game is played and them being able to to compete. And have good body language no matter what’s going on. I always say to the girls, “When someone comes to the game they should not know if we’re winning or losing. They should know we play hard no matter what the score is.”

MH: “Batting average is up from past years, and seems to keep going up. How can you guys get any better?”

CC: “I think it’s the consistency of our practices and what we’re doing in practice that makes it that way. Understanding the mental game and having an approach and having a plan when you get to the plate. Not letting a bad call by the umpire in your first at bat bother you. Understand that every pitch has got it’s own history and stay in the moment. We’ve done some different things. We’re working with a hitting device called the V-Flex that helps you recognize pitches quicker. We bought a program called GameSense that is pitch recognition. We’re trying to more things with our eyes and our brain than in the past where we’ve done a lot on mechanics, we’re working more on the brain piece and the vision piece that will allow the physical part to just kind of take place. We pay attention to what the Power Five schools are doing. It’s like alright, why can’t we do that? Might never play like them, but at least we’re on the cutting edge of things that are taking change in our industry.

MH: “What do you want to see the team do better this season than they did last season?”

CC: “One of the things we’ve talked about is if one thing went bad, it kind of snowballed. So it’s  being able to recognize that we made a mistake, not a big deal, don’t let it turn into another bad play. We talk a lot about body language and having great body language all the time. Your body language affects how you think, we’re working on being present. Don’t go back, don’t look too far ahead, stay present. Then the third thing we’ve been working on is breathing. Just taking a deep breath, being able to be in the moment. Understanding how the breath can get you present, trying to get all of those things together. Our goal every year is to get to the tournament and be at our best at the tournament. The reality is we’re probably not gonna win a whole lot of games early because we do have to come out of the dome and everyone else has played. Working on those things and making sure when the tournament’s here we’re really at our best physically, emotionally, and mentally so that we can win the tournament.”

Black Bears down Wildcats, fall to Eagles
A look under the hood of the UMaine Car Club