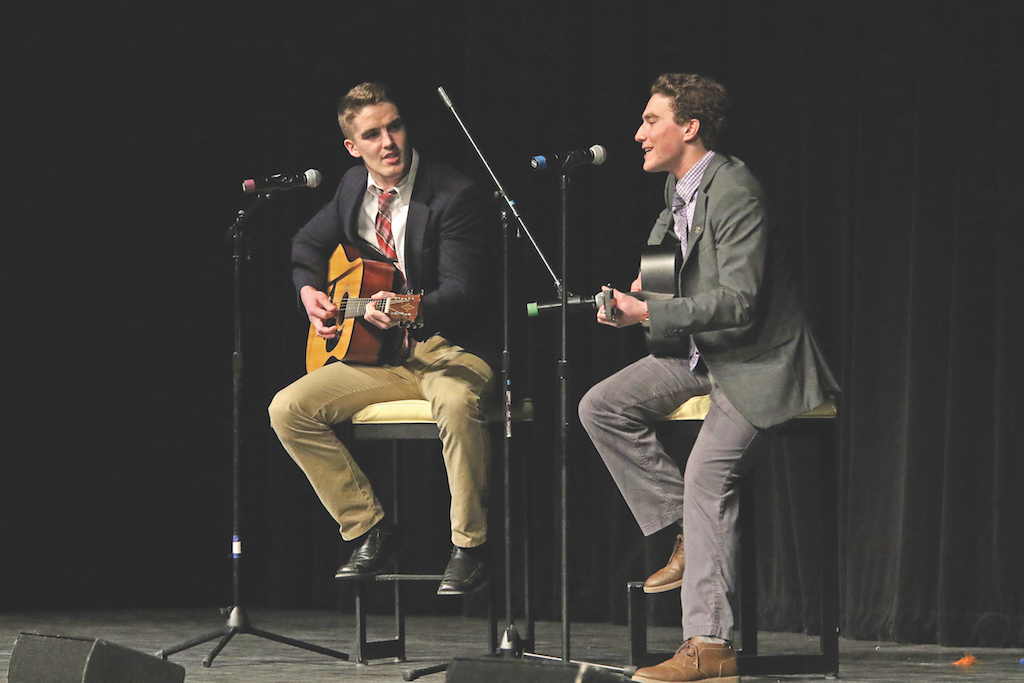 Andrew Arsenault of Sigma Phi Epsilon, right, wins the heart of the crowd during the talent portion of Mr. Fraternity competition on Wednesday, March 21. Photo by Matthew Lavoie.

Alpha Omicron Pi (AOII) held their 16th annual Mr. Fraternity event on Wednesday evening, as a man from each University of Maine fraternity chapters competed for the hearts of the audience and the judges in a beauty pageant-style competition. The event is put on each year to raise money for the Arthritis Foundation, which seeks to find a cure for the joint disease.

The event consisted of three rounds of competitions: the introduction, the talent round, and the formal wear and questions round. Eight judges from various UMaine sororities judged the 12 contestants. The Collins Center audience, which was practically full other than the balcony, rivaled that of a UNH hockey game when it came to sharing their delight and distaste with the performers.

The introductions consisted of each contestant being introduced one-by-one on stage by AOII announcers Faith Perez and Morgan Campbell as they critiqued each of the men’s bios. After the introductions, Pi Kappa Phi’s representative, Emmett Craggy, revealed that he would donate his winnings to ending childhood obesity — a noble cause, no doubt, but one that was shut down by the announcers as they had to break it to Craggy that all money would be going to arthritis.

Zach LaBonne of Alpha Tau Omega christened himself not “the hero that Greek life needs, but the hero it deserves,” while Elliot Sanders of Iota Nu Kappa cut right to the chase saying he deserves it simply because he “has the personality and is tall.” Dominic Haritos from FIJI told the judges: “When you think of Mr. Fraternity, you think of me.”

After the introductions, the crowd was itching to see the men’s talent acts and they equally impressed and disappointed — often times within the same act.

Oskar Matero of Alpha Gamma Rho kicked it off by unicycling in a circle, dismounting and then juggling three balls. As the roar of the crowd built, Matero — perhaps unscripted — began to attempt the unicycling-juggling combination, which progressively earned him more and more boos as the unicycle wobbled and the balls went every which way. Luckily Matero was able to escape the stage with some cheers, as the crowd seemed to appreciate the effort.

Not to be outdone, Jesse Hutchinson of Alpha Sigma Phi lit the arena on fire when he stripped on stage for not one, not two, but three of his fraternity brothers dressed in business attire. Clad in a rainbow boa, a blue wig and some black lingerie, Hutchinson popped, locked, grinded and thrust to the crowd’s approval.

Next was LaBonne from Alpha Tau Omega, who went in a different direction with the talent portion. LaBonne decided to read Dr. Seuss’s “Oh The Places You’ll Go,” a book his grandmother used to read to him when he was younger.

“My grandmother would always read books to me, and the book I chose to read one stage was one of my favorites,” LaBonne said. “My grandmother had rheumatoid arthritis and died of a brain aneurysm when I was six. My goal was to raise awareness within the crowd, and help AOII with their goal.”

Craggy came in hard with some slam poetry, reenacting Jonah Hill’s monologue from “22 Jump Street” and igniting the crowd. Andrew Petherick from Lambda Chi Alpha did a front flip while donning a male romper, and Sanders showed off his leg speed by dancing for the crowd while demonstrating his patriotism with various props.

“I think I did alright,” Craggy said. “The crowd seemed to have fun which is all that really matters.”

“I completely forgot a part that would have been funny,” Sanders said. “I did it for ‘Murica.”

After the question portion, which consisted of questions about everything from competitor’s perfect date to their most embarrassing moment, the scores were in. Through a scoring method combining the judges’ scores with the amount of money each fraternity made for arthritis, Sigma Chi took third, Theta Chi took came in second and Delta Tau Delta’s Crockett was crowned UMaine’s 2018 Mr. Fraternity.

“The crowd was getting behind the contestants, which was nice to see,” Sigma Chi’s Ryan McGinty said. “Overall a successful event that raised lots of money for a great cause.”

The event raised $3,000 this year for the Arthritis Foundation.