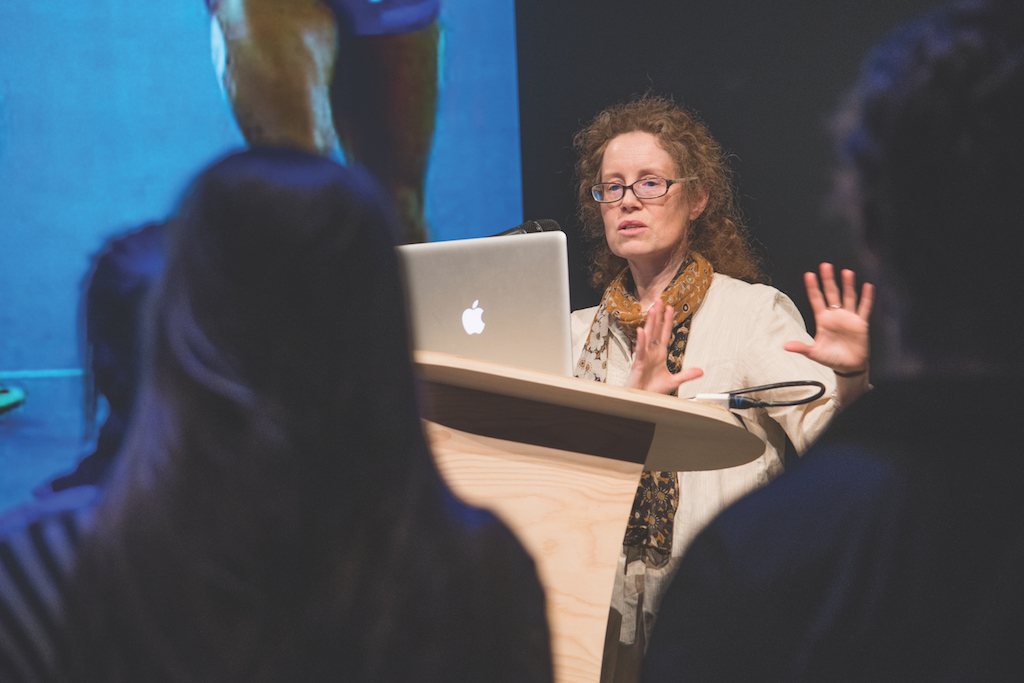 As part of Tuesdays at the IMRC series, UMaine professor Andy Mauery spoke about her art on Feb. 27. Photo by Evan Loignon, Staff.

Andy Mauery stepped up to the brightly lit podium, and got ready to share her work and stories with the University of Maine community on Tuesday, Feb. 27.

As a sculptor, artist and educator, Mauery has been teaching at UMaine since 2000. The title of Mauery’s presentation was “One is the Loneliest Number” and it featured dozens of examples and pictures of her sculptures and sketches.

“I approach art through the lens of the human,” Mauery said. “I want to make plain the complexities of life.”

Mauery’s sculptural work incorporates fibers and human hair into different figures that represent many of the problems humans deal with in our everyday lives, and some of the problems we create in our world and for the environment. She also creates pieces that relate to endangered species, human existence, animal extinction and death, as well as barriers and curtains.

One of her pieces, called “Desperate/Disparate,” was a collection of fiber sculptures, a series of mortality sketches that were created in 2012.
“A sketch has a fixed timeline and purpose,” Mauery said. “We find our meaning as humans and we build our web. Hair has its own politics, it’s deeply personal, every mammal has it which is so intriguing.”
Mauery also created an Oil Skull Sketch in 2010 that was a collection of stitched fibers wound into burial clothes, depicting certain animals and shedding light onto the problem of hundreds of animal species going extinct.

Mauery’s presentation included many visuals and examples relating to the topics that interest her the most and are the center of attention in many of her works. She also discussed her reoccurring and new projects she is working on, as well as the people who have impacted her artistic life the most. Mauery used sports metaphors, including a hockey goalie and a track relay event, to describe many of the problems we face as humans that have an impact on the world around us, especially on the animals and other species we coexist with.

“The passing of the baton represents a deeper life meaning. We have the past, present and future, all represented in the baton; it shows the reality of our meaningful existence as humans on the Earth,” Mauery said.

With almost every seat in the room filled, Mauery was asked many questions by fans and members of the audience who were interested in her work and what it stood for.

“As someone who loves art and works on sculptures and sketches myself, it’s nice to see an art professor in the spotlight, showing everyone what it truly means to be passionate about art and things you love,” first-year student Rachel Thieme said. “It was very inspirational and I learned a lot about myself as an artist, and also about Andy Mauery as a role model and figure in the art world.”

Mauery is currently working in a bacteriophage lab to learn more about microbiology and the creation of art in relation to science, and will be displaying her work in Lord Hall Gallery this July.

If you don’t know APC, now is the album to start
Black Bears beat up on UMBC