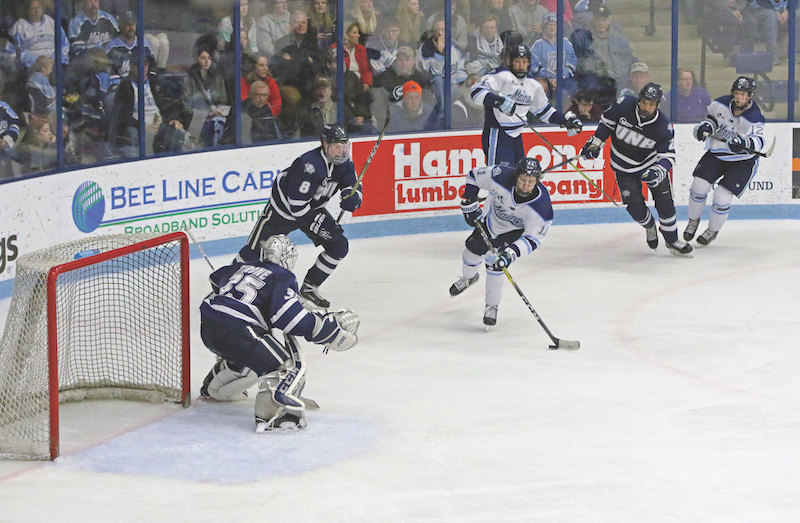 Mitch Fossier lines up his shot in the Black Bears' playoff series against the University of New Hampshire Matthew Lavoie, Maine Campus

In net for the Black Bears was first-year goaltender Jeremy Swayman (14-10-3). Fourth-year goalie and assistant captain Danny Tirone (10-16-6) got the start in net for the Wildcats.

A little over two minutes into the first period, third-year winger Brendan Robbins tried to go short side on a two on one to put Maine on the board early but was met by the Tirone’s glove. About seven minutes in, Maine had another chance to take the lead when second-year winger Mitchell Fossier beat a UNH defender and cut across the middle but rang the post.

About nine minutes later, Maine’s fourth-year winger Nolan Vesey was sent to the box for cross checking. Eight seconds into the ensuing powerplay, UNH second-year center Liam Blackburn put home a rebound to take a 1-0 lead. Just under two minutes later, Maine thought they tied it but the goal was waved off for a high stick. After further review the call was upheld. Although they didn’t leave the period with the lead, the Black Bears dominated the first in shots, 19-9.

Maine was able to tie the game just over three minutes into the second period when Robbins slipped between two defenders to beat out an icing call and slapped the puck on net, slipping it between Tirone’s blocker and his body. Maine had a chance to take the lead two minutes later when UNH second-year defenseman Anthony Wyse went to the box for tripping, but they weren’t able to convert on a couple of good chances.

The Wildcats had their chance to take the lead later in the period when fourth-year winger Jason Salvaggio took a shot from the high slot, but Swayman came up with a huge glove save to keep the game tied at one. Maine finished the period still leading in shots 31-20.

UNH looked like they had taken the lead three minutes into the third period when the puck deflected off first-year winger Charlie Kelleher’s helmet and dropped into the net. The goal was waved off and the game remained tied. Less than a minute later, Fossier hit the post and the puck was loose in front but nobody could manage to dig it home. A few minutes later, Maine’s second-year center Tim Doherty went to the box for tripping. On the penalty kill, first-year winger Emil Westerlund came up with a huge block to once again keep the game knotted at one.

Maine’s fourth-year center Cedric Lacroix finally broke the tie with just over three minutes to go in the game when he buried a rebound for his fifth goal on the season. UNH pulled Tirone with 1:45 to go but 21 seconds later, Doherty put one in the open net. Maine sealed the deal with just over a minute left when Lacroix dove and poked the puck into the empty net for his second of the game.

The Black Bears won by a score of 4-1, putting an astounding 49 shots on net to New Hampshire’s 27. They also took a 1-0 series lead heading into Saturday night’s game.

“We played better as the game went along, but we didn’t play that rush well,” UNH Head Coach Dick Umile said, referring to Lacroix’s go-ahead goal.

“We were solid, but we’ve got to be better tomorrow night. Their goalie played great.” he said

Lacroix was impressed with his team’s persistence.

“We didn’t get flustered after they scored the first goal. We played well. Their goalie played very well. We got a lot of shots,” he said.

Swayman was back in net for the Black Bears and Tirone got the start again for the Wildcats.

Maine had the game’s first chance early when Doherty received a pass in front from Vesey but Tirone was there to make the stick save. Maine had another good chance midway through the period when Fossier protected the puck. He drove past a UNH defenseman but just missed the far side corner, lobbing the puck over the net. Less than a minute later, UNH jumped out in front when second-year center Liam Blackburn cut across the slot and patiently waited until Swayman was down and out to lift the puck over him. The Black Bears left the first period down 1-0 but doubled New Hampshire’s shots 14-7.

Maine was able to knot the game at one just over three minutes into the second period when Fossier redirected a shot from third-year defenseman Rob Michel. Shortly after, Fossier thought he had another when he dug home a rebound three minutes later, but the goal was waved off due to a whistle prior to the puck crossing the line.

Just under the midway point of the second, Swayman came up with a huge save with the left pad to keep the game tied. Maine had an opportunity about five minutes later when they had a two-on-one rush on a penalty kill. Robbins cut across the high slot and tried to beat Tirone up high but the puck deflected off the knob of his stick and up into the netting for a whistle.

With just over three minutes to go in the period, Robbins went to the box for a high stick at the same time that Salvaggio went for roughing, creating four-on-four play for two minutes. During the four-on-four, Vesey took a pass from Michel as they entered the zone and released a bullet, beating Tirone far side to the right corner to take the lead. The goal was reviewed but the call was upheld. Maine finished the period up 35-18 in shots.

About nine minutes into the third, Maine had a chance to go up two when they had a three-on-one opportunity but couldn’t get a shot off. They had another chance three minutes later on a two-on-one but once again came up short when Tirone made a big save with the left pad. Maine went on the power play with less than four minutes to go in the game when first-year defenseman Max Gildon was sent to the box for slashing. Less than a minute into the power play, Michel let go of a one-timer that was saved by Tirone but left in front for first-year winger Eduards Tralmaks who buried it to go up two goals. New Hampshire added another goal but it wasn’t enough, as Maine went on to win by a final of 3-2, sweeping the Wildcats.

“We played strong both nights,” Fossier said. “Tirone played very well but thankfully we were able to sneak a few past him.”

Tralmaks, who scored the game-winning goal, felt like this was a much needed game for him, commenting “I had lost my confidence in past games, but this was huge.”

Vesey also mentioned that this was a good bounce-back game for him.

“When none of them fall it can get frustrating,” he said. “It was good to see one finally go in. Hopefully it will open the floodgates for me.”

“Nolan [Vesey] and I actually talked about it,” Tralmaks said. “We said we needed to score to win.”

Maine is set to take on Providence College next weekend in the Hockey East Quarterfinals.