Candidates for Student Government President face off in debate 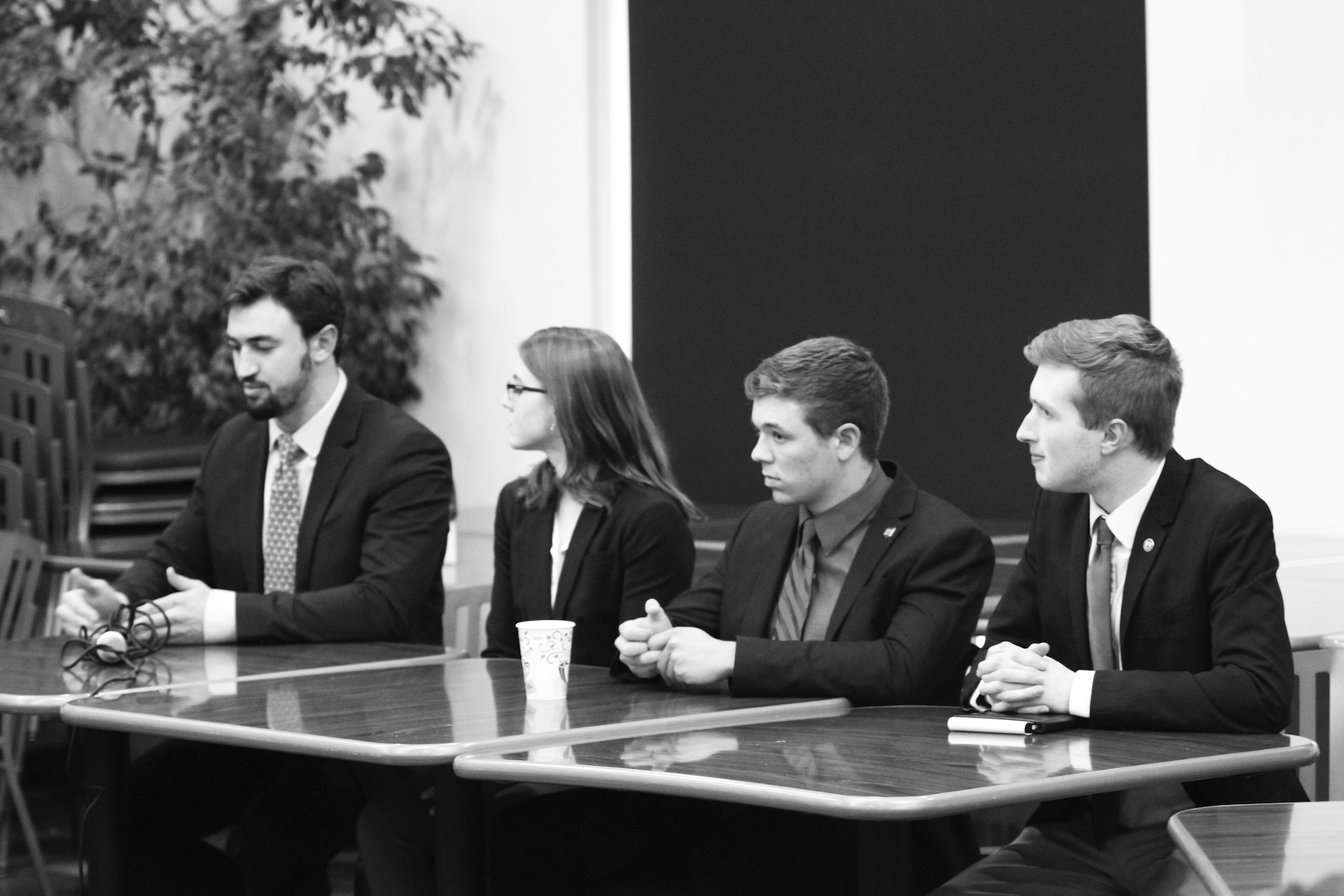 On Wednesday, March 21, the four candidates for student government president

squared off for a debate in the North Pod of the Memorial Union. With a full audience, the candidates answered questions from a panel as well as some audience questions at the end.

The first candidate was John Kay, who is a third-year in the business school and Honors

College. He used to play football for UMaine and is a sector head in Spiffy, the Student Portfolio Investment Fund through the business school.

The second candidate was second-year Taylor Cray. She studies political science and women’s, gender, and sexuality studies and is the co-chair of the feminist collective. She is also the student manager at the University of Maine IT Center.

The third candidate was second-year Logan Armando. He is currently the Vice President of Student Government and is a brother of Sigma Phi Epsilon. He studies mechanical engineering and is a member of the Sophomore Owls.

Second-year Jacob Bradshaw was the final candidate. He has been a student senator for two years on the student senate and is a brother of Beta Theta Pi. On campus, he is also involved in intramural soccer and the Sophomore Owls. He studies business finance.

The debate began with Corey Claflin, Chair of the Fair Election Practices Commission and moderator of the event, introducing the panel made up of a representative from the Orono Town council, the Maine Campus and Campus Activities and Student Engagement. The panel read off questions submitted by students and some that Claflin created, with each candidate having between 45 seconds and a minute to answer. They took turns going first for questions.

The first question of the night was in regards to how the candidates planned to change the current practices regarding the use of finances, and Kay was the first to answer. He talked about finding the best way to allocate resources and looking at the return that comes from each investment made.

Cray was next, and she expressed an issue the process of applying for funding has been a confusing topic for students and that this was a big thing that needed to be cleared up. She also thought that there was a potential to work with Residence Life to fund as many groups as possible.

Armando used his experience as vice president to talk about how the return is currently analyzed. He said his goals would be to increase the information about funds, but also put on more events for students. Bradshaw wanted to make it easier for groups to get funding and to make sure all the funding was used more efficiently, citing the purchase of medallions for the student government office as an example of what didn’t need to be spent.

Throughout the questions of the night, many topics were touched upon including working with the administration on issues such as sexual assault and safety, working with diverse students, making Maine Day more positive, helping students with mental health concerns and establishing a relationship with the new president.

All of the candidates talked about a need for better communication between the government and the student body and Cray brought up the idea of having a newsletter about what the clubs are doing. Bradshaw also suggested trying to help students with more parking and more food options on campus.

Throughout the discussion on mental health on campus, the candidates discussed that the counseling center was too busy and that they are looking for a non-mandated counselor for the Women’s Resource Center to have another resource on campus for students.

When talking about safety, Bradshaw made a comment about stationing a security guard at the library, which resulted in a follow-up question from the audience about this idea. Bradshaw said, “My overall goal is to promote the culture of being more safe on campus.” He went on to explain that the security guard idea was just about having safer practices and having a more safe-minded campus.

In regards to safety, Kay said, “If it’s not broke, don’t fix it.” He suggested focusing on lighting the campus more instead, but did say if issues arise then maybe a security guard would need to be at the library.

Cray said that we should focus on security within the campus, not from outside because not all students feel safe on campus. She proposed more trainings and conversations with students.

Armado talked about lighting on campus and how UMPD works to make sure places are well lit. He also spoke of offering more trainings to ensure that students on campus have the resources that they need.

The candidates also spoke of the leaders that Greek Life produces and their plans to work with Greek Life. Kay said that although he is not involved in Greek Like, he knows many people that are, including his own friends. In the position, he would look to see how they could increase marketing to make sure that the image of Greek Life stays positive. Cray suggested that they could also work with Greek Life to improve relationships and improve the handling of sexual assaults. Bradshaw also planned on talking with fraternities and sororities about what they should and should not be doing to ensure that they have a positive image.

This was the first time that the debate has been held in at least four years and the oldest members of the Student Senate had never seen one take place.

At the end of the event, Claflin encouraged everyone to vote on March 29, saying people could vote from their phone or laptop. Voting will be done through the UMaine Portal from 9-5 on March 29 and is available anywhere with internet access.