#YouMaine: Derek Deoul feels right where he belongs at UMaine 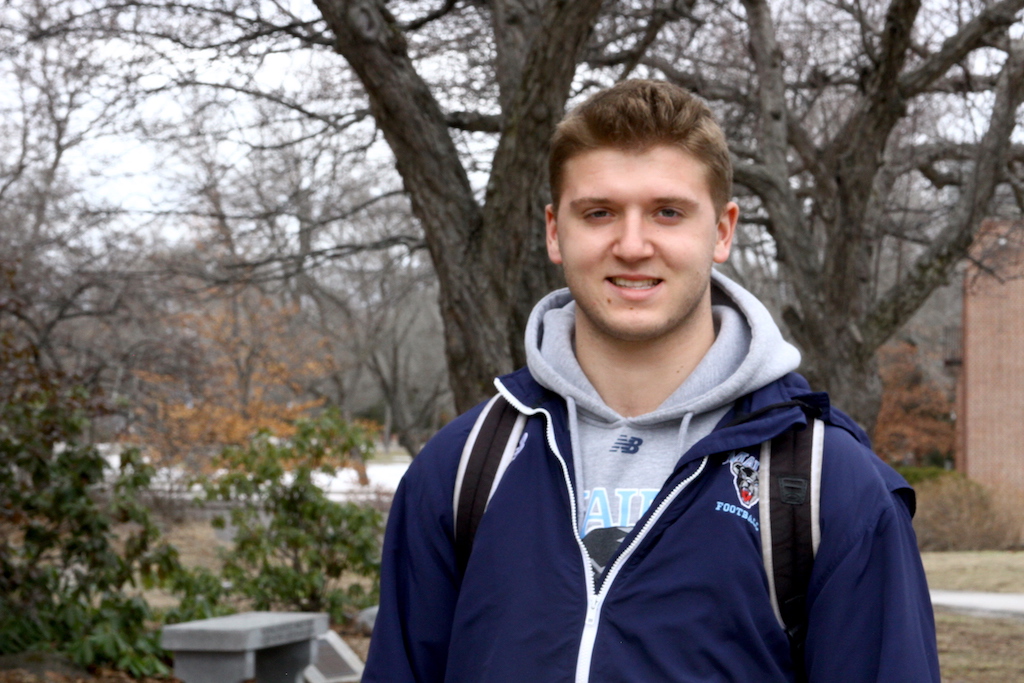 For Derek Deoul, the first two years were consumed by school, football and recovering from a torn meniscus. The third-year punter and kicker from Washingtonville, New York thought he had a full plate until he found something else on campus that he loved.

“The first two years I was doing me. I did my homework, I did football and that was really it,” Deoul, a business management student, said. He calls the two commitments his “full time jobs.”

But then he stumbled upon Team Maine, an active group of students at UMaine whose mission is to assist new students in their transition to higher education and the UMaine community.

“A guy who just graduated this past semester, Sam Lenson, he’s my best friend and he worked with Team Maine. He had me do orientation — it was actually weird because I wanted to do it with him and then he bailed out last second,” Deoul said. “So, I went into it not really knowing anybody this past summer and ended up loving everyone that was a part of it. So much so that I joined and got a job with them.”

Deoul recognized his own difficulties with the transition from high school to college and wanted to make it easier on others entering UMaine.

“When I was home I always wanted to give back to my community back home. Now that I’m up here [in Orono] this is my community and I want to give back and help people get adjusted to college easier,” Deoul said. “We all know transitioning from high school to college is so tough on all of us, time management-wise and just being in a new environment.”

Deoul says he’s seeing the results of his involvement already, something he talks about with a huge smile on his face.

“We did a reception down in Boston and there was a family that was saying how much I had already affected their college experience,” Deoul said. “It was just really cool to get that type of feedback and to know that what I’m doing is actually affecting people in a positive way.”

It would be hard to find someone on campus who hasn’t interacted with Team Maine at least once during their time in Orono, as they are heavily involved with incoming students and are more or less an extension of the admissions office. They give tours on campus, call prospective students to tell them about upcoming events and host open houses and events such as Accepted Students Day.

While Deoul came to UMaine primarily for the football program, the campus and its community have assured him that he made the right choice.

“I’m active in clubs and activities and Team Maine. I always tell people that a one word summary of UMaine is ‘opportunity’,” Deoul said. “The coaches gave me an opportunity to play here, I didn’t have much opportunity to play elsewhere, and now I start on the football team. And all the people you can meet and network with? I never thought I would have this many contacts in my phone.”

“The coaches have stressed to us from day one that our jersey, our name, us representing the Black Bear football program is so much more than playing on the field,” Deoul said.

Deoul has been active on the football field as well, punting for 2,422 yards and playing in all 10 games last season as the starting punter. Deoul finds inspiration in athletes Eli Manning and Derek Jeter. But he made it clear that his true role models are his parents and his sister, who plays basketball for George Mason University. He says the game of football has taught him a lot too.

If Deoul could make one analogy for UMaine, it would stem from an all-time classic fairy tale.

“UMaine is kind of like Goldilocks,” Deoul said with a laugh. “Not too big, not too small.”