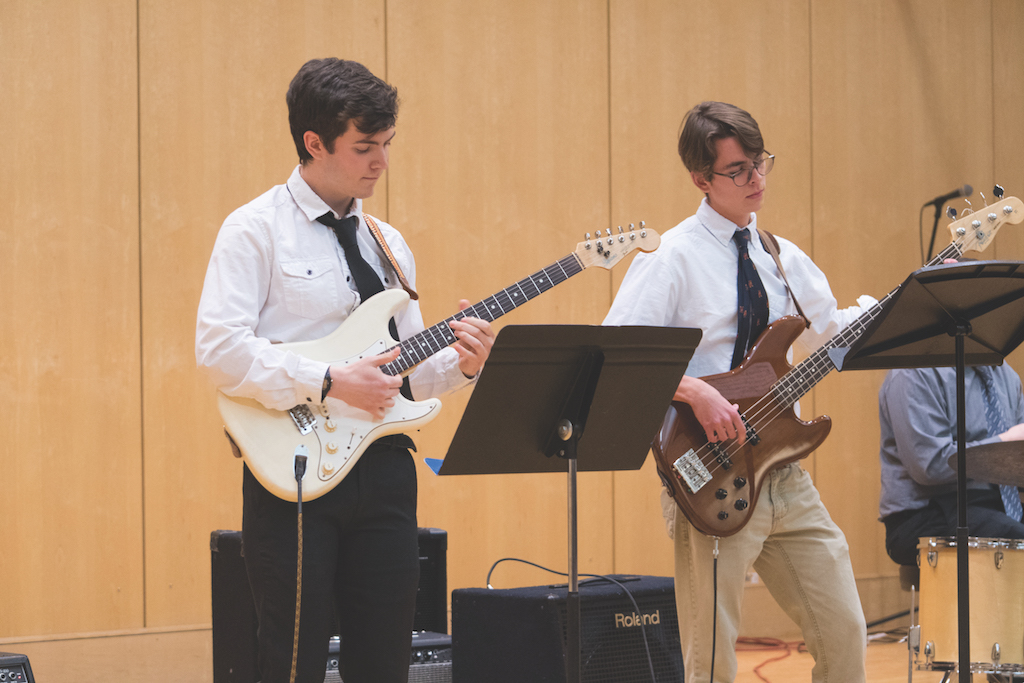 The Chamber Jazz Recital was held in Minsky Recital Hall on Friday, Feb. 23. Four University of Maine jazz groups came together for a friendly and non-competitive battle of the jazz bands.

“Basically we have a big jam session at the beginning of the year and they figure out who they have for what instruments and then they divvy them up between the different combos,” Jake Gebhard, a trumpet player from the second group, said.

While each group played three songs, they each also had very different styles and approaches to their performance.

The first group seemed to have a beach theme, which was reflected by the titles of their three songs: “Sandu,” “Stormy Weather” and “Wave.” The songs transported me to a rainy day on an island, where there were no expectations and only relaxation. The band presented itself with a very classic look, as the two guitar players in the back wore white shirts with ties that gave off a throwback 70s vibe as they plucked their way through three guitar-heavy tunes. All three songs included many solos as well by almost everyone in the band, particularly trombonist Sam Nichols, whose long solos gave the music a unique flare.

The second group was much different than the first, with both a trumpet and a violin in the mix. In their final song, “All of Me,” Gebhard on trumpet and Lindsay Waller on violin had a solo duel where it jumped back and forth from one person to the other. It was a successful contrast between the two instruments and something I didn’t expect to see.

“It’s a lot of fun trying to balance between the trumpet and the violin because you have a brass instrument and a string instrument, so you have to work to balance one another,” Gebhard said.

Gebhard says that he and the other students in his group chose their own music and had only been practicing their songs for about three weeks.

“We’re allowed to choose our own songs, so we’re encouraged to pick something we’re interested in,” Gebhard said. “We arrange it, we pick out the order we want to solo in, so we’ve got a lot of freedom in our combos.”

Group two’s songs gave off a bit of a British feel, as if they’d been plucked right from the movie “Paddington 2.” They were upbeat, felt extremely jazzy and relied heavily on trumpet.

“I try to follow some of the older style like Bing Crosby and Frank Sinatra,” Schessler said. “Seth MacFarlane, the guy who makes Family Guy, actually sings in that style so I listen to a lot of him. His tone is really rich so I try to find a lot of that in my own tone.”

The group’s song choices also required Schessler to vocally improvise with long series of “boo-dops” and “zoo-bops,” which Schessler says come to him in the moment.

“I’m making it up on the spot, it’s whatever vowel or consonant comes to mind,” Schessler said. “I’m listening to the other parts and finding the notes within the chord and playing around with it.”

The band was also more blues-oriented, playing slow but perky tunes that felt upbeat but not rushed. “Blue Skies,” the band’s final tune, felt like walking through a park on a beautiful spring day.

The final group was the largest and included upright bass and piano. There were solos performed by everyone, including some upright bass that required intense and meticulous strumming. The highlight, however, was violinist Anthony Viselli, whose swaggerous solos were full of passionate movements to the music, which only added to the performance.

One of the interesting contrasts between all four bands was their attire. The first group was fairly loose, the second had a black and maroon theme, the third wore fairly dark clothes but was not too coordinated, and the fourth wore dress clothes of various colors. None was really better than the other and all styles fit the music. Minsky Hall worked perfectly for the type of show, as it felt formal but not too formal and the wooden backdrop gave off a very jazzy feel.

Keep an eye out for these jazz troupes in the Memorial Union, as they each perform there at some point throughout the semester and each offer a unique approach to the genre.

Pep Band cheers UMaine while doing what they love
If you don’t know APC, now is the album to start