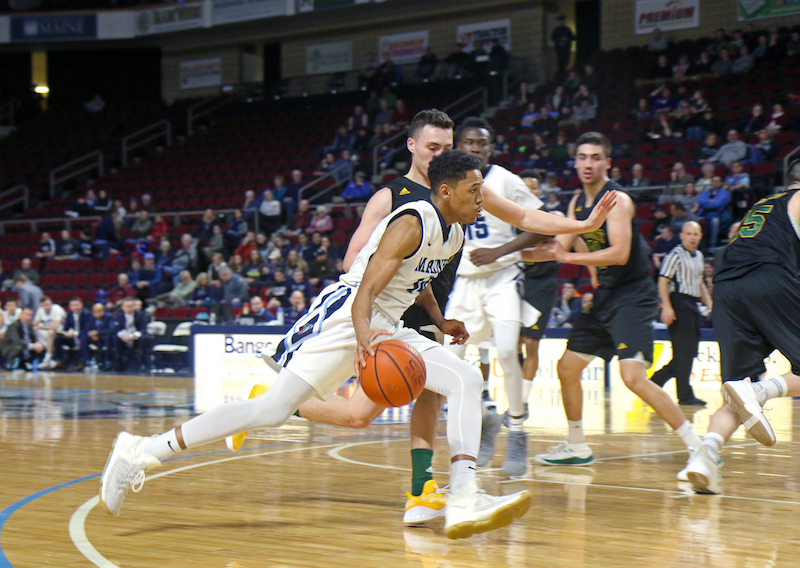 Isaiah White takes a drive to the hoop in hopes of two points in Tuesday's contest against the Vermont Catamounts. Matthew Lavoie, Maine Campus

On the night of Feb. 27, the Maine Black Bears rounded out their regular season at home in the Cross Insurance Arena in Bangor. The America East-leading Vermont Catamounts, who are almost surely bound for the NCAA Tournament with a record of 25-6, were the opponents for the night.

At 7:08 p.m., the game tipped off. The Catamounts started off the game firing from beyond the arc, with third-year guards Ernie and Everett Duncan each canning a three-ball. The Catamounts are a very slow, methodical and efficient team, which is a testament to Head Coach John Becker’s success with the program. A two-time America East coach of the year, and a contender for national coach of the year last season, Becker has built a winning culture at Vermont and brings the team to March Madness almost every year. They are also currently tied for the longest active road winning-streak in the nation with Gonzaga University.

Defense was clearly an emphasis for Vermont early on, as the Black Bears struggled to nibble away at the 5-point lead Vermont built early on in the game. The Black Bears would put together a few nice possessions, but then Vermont would thwart any attempt at a run with their stout defense and slow pace of play, which were the two big difference-makers in this game.

With about 10 minutes to go in the first half, Maine was still hanging close, using some toughness on the offensive glass and in the paint to get themselves to the free throw line. However, they didn’t have much of an answer at the defensive end, with Vermont going 10-16 from the field, including 5-7 from three-point range, in the first 12 minutes, while Maine shot a dismal 8-22 from the field.

One bright spot for the Black Bears in the first half was second-year forward Andrew Fleming. A Mainer himself, Fleming is a force inside and can also stretch the floor a bit with his jump-shot. If he can continue to develop his jumper, he will be an impact player in the America East conference. Very few players with his size and speed can stretch the floor, and that would also be a very valuable piece for the Maine offense to work around.

Head Coach Bob Walsh decided to go to a full-court press with about five minutes left in the half. Vermont was slicing them up in the halfcourt, so maybe forcing them to go the whole way down the floor with someone in their jersey would help. The Black Bears ended up trimming a few points off the lead and went into the half down 33-28. Fleming led the Black Bears with nine points and four boards, and fourth-year forward Drew Urquhart led the Catamounts, also with nine points but grabbing two rebounds.

The Black Bears came out of the locker room with initiative; an and-one from both Fleming and third-year guard Aaron Calixte, the team’s leading scorer, followed by a three from Calixte cut the Catamounts’ lead to just 3 with 16:40 remaining in the game. About a minute later, Calixte converted on another and-one and the Black Bears tied the game at 39 with 15:47 to go. A Vermont timeout was called to stall the momentum that Maine was building. Their hot shooting cooled off a bit in the start of the second half, a main reason that the Black Bears were able to tie it up. Vermont quickly got back on track, however, by continuously feeding it inside to their bigs, Urquhart and redshirt fourth-year forward Payton Henson, who dominated the paint for the remainder of the game.

Vermont used an 11-3 run to make the score 50-42 with 11:40 remaining in the game. At this point, they really paced the game, knowing that if they can slow it down and get easy buckets off of Maine’s lacking press defense, they’ll come out with the win. Fourth-year point guard Trae Bell-Haynes, Vermont’s best player and America East Player of the Year in 2017, began to take over the game. Vermont rode him down the stretch, despite Calixte and Fleming repeatedly making tough shots to keep Maine in the game. With eight minutes to go, Vermont had stretched it to a 13-point lead, and it never got much closer than that, as Vermont held on to win the game with a final score of 74-62.

Black Bears Season Comes to a Close in Burlington

On Saturday March 3 the eighth-seeded Maine Black Bears were in Burlington to take on the top-seeded Vermont Catamounts in the opening round of the America East Conference Tournament.

Despite being the lowest-seeded team in the tournament, the Black Bears jumped out to a surprisingly strong lead to start the game. Third-year forward Ilija Stojiljkovic and Calixte each got the ball rolling with a three-pointer in the early minutes. Bell-Haynes, along with fellow Urquhart, held the reigns for the Catamounts early on, with Urquhart pulling down some tough boards and causing havoc on the defensive end with blocks and steals. The Catamounts slowly chipped away at the Black Bears’ early lead, attempting to pound away at them by slowing the pace and forcing them to make stops on defense. For a while, the Black Bears held the advantage, finding the open spaces and knocking down their jumpers. However, Bell-Haynes and Henson hit some shots at the end of the half to vault the Catamounts ahead of the Black Bears 36-33.

The Black Bears came out of the locker room determined to pull off the historic upset, as the Catamounts are almost ensured to be playing in the national tournament. But stopping the Catamounts slow offensive attack has always been difficult with Becker at the helm. Bell-Haynes continued to power the Catamounts in the opening minutes of the second half. He used his skill to get inside, force the defense to collapse on him, and made the decision whether or not to go up himself or kick it outside. He’s a tough player to stop, and the Black Bears struggled to do so in the second half, despite finding ways to limit him in the first. Fleming was a bright spot in the second for the Black Bears, as he continues to show his development late in the season. A massive body in the lane, he can force players to alter their shots, and can hog boards when he wants to. The Catamounts built the lead up to 12 with eight minutes left off a layup from Henson, and it never got much smaller than that the rest of the way. Knowing it would be their final game, Walsh inserted fourth-years Garvey Melmed, who plays guard, and Ilker Er, who plays forward, into the game. Each player scored during their final game, a nice send off for the two Black Bears. Er’s jumper with three seconds left made the score 75-60, and that was all that was written for the Black Bears 2017-2018 season.

The  Black Bears have a lot to look forward to. Redshirt second-year Isaiah White, who was the high-scorer with 17 points on a 50 percent field goal percentage, has proven his ability to carry an offense. Calixte, who struggled a bit, recorded 11 points on 4-15 from the field, less than his usual, efficient self. Off the bench, third-year guard Vernon Lowndes Jr. had nine points, slashing to the rim for some nice-looking buckets.

For the Catamounts, the usual suspects were at the top of the box score. Bell-Haynes had 21 points and four assists, and Henson also had 21 points of his own. Urquhart recorded a double-double with 10 points and 12 boards, a dominant force in the paint for the entirety of the game. The one player who struggled for Vermont was Ernie Duncan, who is normally a sharpshooter, but went 3-12 from the floor, including 3-10 from beyond the arc.

The Black Bears will end their season here, but the Catamounts will continue America East play against Stony Brook on Tuesday, March 6. The game is scheduled to start at 7 p.m.