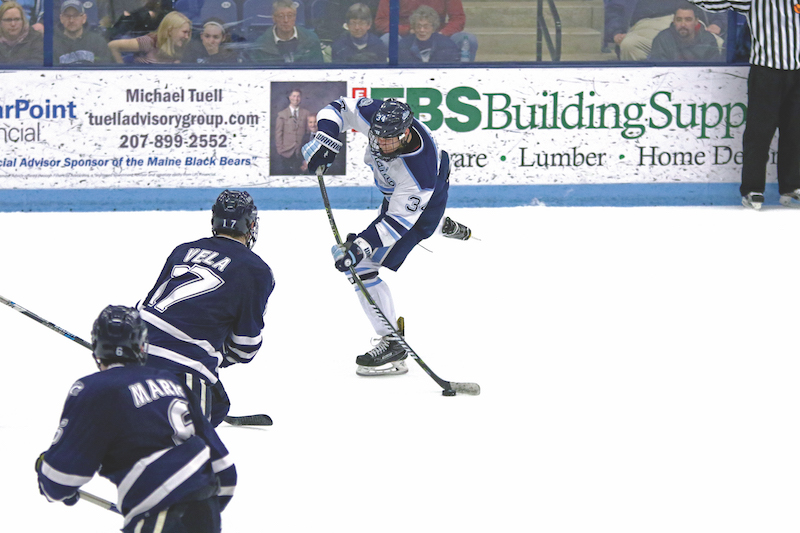 After sweeping the University of New Hampshire Wildcats, the Maine Black Bears will take on the Providence College Friars next weekend in the Hockey East Quarterfinals.

Maine heads into the three-game series with a record of 18-14-4 overall and 10-11-3 in the Hockey East regular season. The Black Bears are ranked sixth in Hockey East.

Providence enters the game as the third seed with an overall record of 20-10-4 and a Hockey East record of 13-7-4.

Maine has yet to beat the Friars in two meetings this year, losing by a score of 3-0 in the first game and 3-2 in overtime in the second.

First-year Jeremy Swayman, Maine’s primary goaltender enters the series with a save percentage of .922, a goals against average of 2.66 and an overall record of 15-10-3.

Providence premier goalie, third-year Hayden Hawkey has a save percentage of .916, a goals against average of 2.12 and an overall record of 20-10-3. The Montreal Canadiens’ 2014 sixth round draft choice may have to find a way to stop a large number of shots if Maine brings the offensive pressure that they showed against New Hampshire.

Maine is coming off a 92-shot weekend against UNH, which is an outrageous amount for only playing two games. For Maine’s fourth-year left wing Nolan Vesey and first-year right wing Eduards Tralmaks it was a bounce back series as both players scored to end their scoreless slumps.

Vesey went 13 games without putting a puck in the net until Saturday night when he beat UNH fourth-year goalie Danny Tirone on a beautiful shot to the top right corner.

Tralmarks’ goalless drought lasted nine games before scoring Saturday night when he put away the eventual game-winner on a rebound goal.

Tralmarks and Vesey both felt like they needed to end their goalless streaks in order to help their team win. They were also hopeful that ending their droughts could create momentum for them heading forward in the tournament.

“Nolan and I actually talked about it. We said we needed to score to win,” Tralmarks said following Saturday night’s game.

“When none of them fall it can get frustrating,” Vesey said. “It was good to see one finally go in. Hopefully it will open the floodgates for me.”

Third-year defenseman Rob Michel had a breakthrough game on Saturday as well, dishing out assists on all three Black Bear goals and earning first star of the game. Michel entered the game with 14 points on the season; five coming from goals and nine from assists. He also had a strong game defensively to go along with his offensive presence.

Maine will be faced with the task of shutting down first-year forward and St. Louis Blues’ 2015 third round pick Erik Foley. Foley has been red-hot all year with 15 goals and 19 assists for a total of 34 points in 32 games. He also carries an impressive plus/minus of +14.

Maine will look to carry the momentum from the opening round series into the quarterfinal series against Providence.