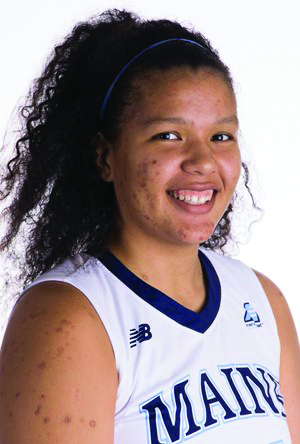 On Wednesday, Feb. 14, 19-year-old Nikolas Cruz opened fire on students and staff at Marjory Stoneman Douglas High School in Parkland, Florida. This incident — which would later be known as the ninth deadliest mass-shooting in United States history — resulted in 17 dead, at least 17 wounded and millions across the world stunned and in disbelief.

Kathleen “Kat” Williams is a first-year student-athlete from Coral Springs, Florida, as well as a member of the women’s basketball team at the University of Maine. She’s also a recent alumna of Marjory Stoneman Douglas High School. When asked about her former high school, Williams explained that it was “just like any other high school.” Something that made the school unique, however, is that the school was situated within what the United States Trade Association named as one of the safest cities in the country.

According to the Federal Bureau of Investigation’s 2017 crime statistics, Parkland, Florida was named the 15th safest city in the country. Speaking to the high school’s involvement in receiving such an honor, Williams notes that “[the school] didn’t have as many fights as schools that were 20 minutes or even 5 minutes away. Everybody just kind of understood that you have to respect each other’s spaces. It just makes it a lot easier to get along.”

Williams first learned about the shooting from friends back home in Florida who were sending her messages through Snapchat. “When I first found out I thought ‘this must be a stupid joke — my friends are being idiots’”, Williams recalls. Williams went about her day like she regularly would until she was faced with the matter once again while visiting the dining hall on campus. “I saw it on the TVs but [still] thought ‘It can’t be that bad because nothing bad actually happens at [Marjory Stoneman] Douglas’”. Nonetheless, Williams still made made sure to reach out to everyone that she knew back in Florida to check in with them.

The University of Maine Women’s Basketball team was en route to their game at the University of Massachusetts – Lowell that night on February 14. Williams received a message that someone that she knew had been injured in the Parkland shooting. This was the news that made William’s believe the actuality of the shooting. “At that point I just kind of broke down; my team came around me and tried to help me. It was pretty rough,” Williams said.

The next day, Williams found out that another person that she knew had gotten injured. Both of these individuals survived the shooting with injuries that were non-life threatening. However, news relating to the fatal shooting of a fellow student-athlete and a coach — with whom most of the athletes had close relationships — were also shared with her that day.

“It was just a lot to handle in a short period of time,” Williams said.

Within the following days, law enforcement had identified the shooter and the 17 victims. Williams explained that she hadn’t known the shooter or any of the victims personally, but “[Marjory Stoneman Douglas] was pretty big…if you were an athlete, you get to know a little information about everybody.”

More than a month after the incident the city of Parkland, Florida still finds itself focused and deeply involved in the shooting. Many issues concerning gun safety and accessibility have surfaced since the Parkland shooting. Multiple changes relating to firearm obtainment have been implemented since this incident, such as Florida’s revised gun control laws, however nothing on the federal level has been put in place. What many are protesting and advocating for is to alert Congress about to issues relating to the banning of one’s ability to purchase automatic rifles, among others.