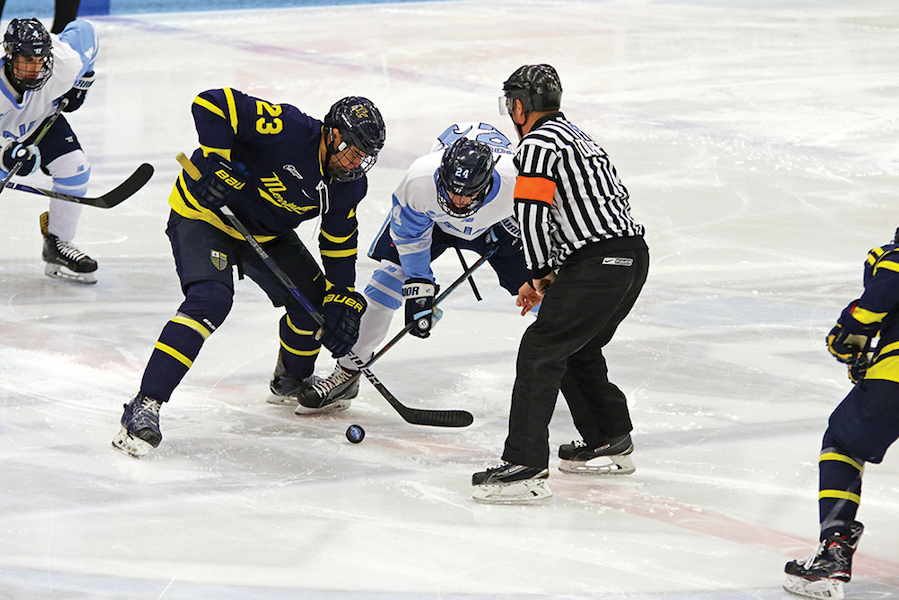 Peter Housakas takes the face off against Merrimack. File photo

Overall it was a successful season for the University of Maine men’s hockey team, who finished with a record of 18-16-4 and 10-11-3 against Hockey East teams. This was a huge turnaround from last year’s 11-21-4 season.

The Black Bears were eliminated in the second round of the Hockey East tournament by Providence College, who went on to lose in the championship game to Boston University. Maine didn’t make it easy for the Friars, losing both games of the series by only one goal. Providence also shut out No. 9 seeded Clarkson in the first round of the NCAA tournament, falling to Notre Dame in the next round.

A big piece in this turnaround was first-year goaltender and Boston Bruins draft choice Jeremy Swayman. Swayman finished the season with a record of 15-13-3 and a save percentage of .920, which was the fourth-best nationally among rookie goalies. He was also named to the Pro Ambitions All-Rookie Team and was among the eight players on the All Star Honorable Mention list.

Another Maine player on that list was second-year forward Chase Pearson. Pearson finished the season with 103 shots on goal, a number that placed him second among Maine forwards. He also liked to contribute defensively, blocking 24 shots.

Second-year forward Mitchell Fossier led the team in points, finishing with 12 goals and 22 assists for a total of 34 points. He had four points in four games during the Hockey East tournament, three of which came from assists.

Maine’s Head Coach Red Gendron, who just recently signed a two-year contract extension through the 2021 season, was pleased with his team’s performance this year.

“We just finished an exciting year with a very young and very talented group of Black Bears. Our players, our coaches and our staff all know how very bright our program’s future is. Everyone in our program craves the work and relishes the challenges of doing their parts to propel Maine to the summit of college hockey,” Gendron said at the press conference announcing his extension, as quoted on the university’s athletics website.

Gendron has been with the team since 1990. Until 2013, he was an assistant coach under former head coaches Shawn Walsh and Tim Whitehead. Gendron has a record of 49-71-17 in his five seasons as a head coach.

“We very much appreciate Red’s ongoing efforts to build this team to a championship level,” UMaine interim Athletics Director Jim Settele said at that same press conference. “Under his leadership, we had an exciting year reaching the Hockey East quarterfinals, and we know that next year should be even more impressive. The coaching staff’s guidance of our players has allowed them to succeed on the ice and in the classroom. With a returning core of solid players and some fantastic recruits, expectations are high for next year, and we look forward to Coach Gendron leading the way.”

The Black Bears will be without fourth-year forwards Nolan Vesey, Cedric Lacroix and Canon Pieper and fourth-year defenseman Mark Hamilton next year. Vesey will continue to play hockey with the Toronto Maple Leafs, who selected him in the sixth round of the 2014 NHL entry draft.

Despite the loss of some great players, Maine has a lot of young talent heading forward. Although they’re losing a strong defenseman in Hamilton, there are a lot of solid players who shouldn’t have any problem filling that hole. First-year defenseman Brady Keeper will be a major key. He finished this past season leading the Black Bears in plus-minus, going +17. He also led all defensemen in points with six goals and 16 assists for a total of 22 points.

Third-year defenseman Rob Michel and second-year defenseman Patrick Holway are both experienced players who should have no problem keeping opposing teams to low shot totals. They will also have Swayman returning as a last line of defense.

The Maine Black Bears are in line for another winning record next season.