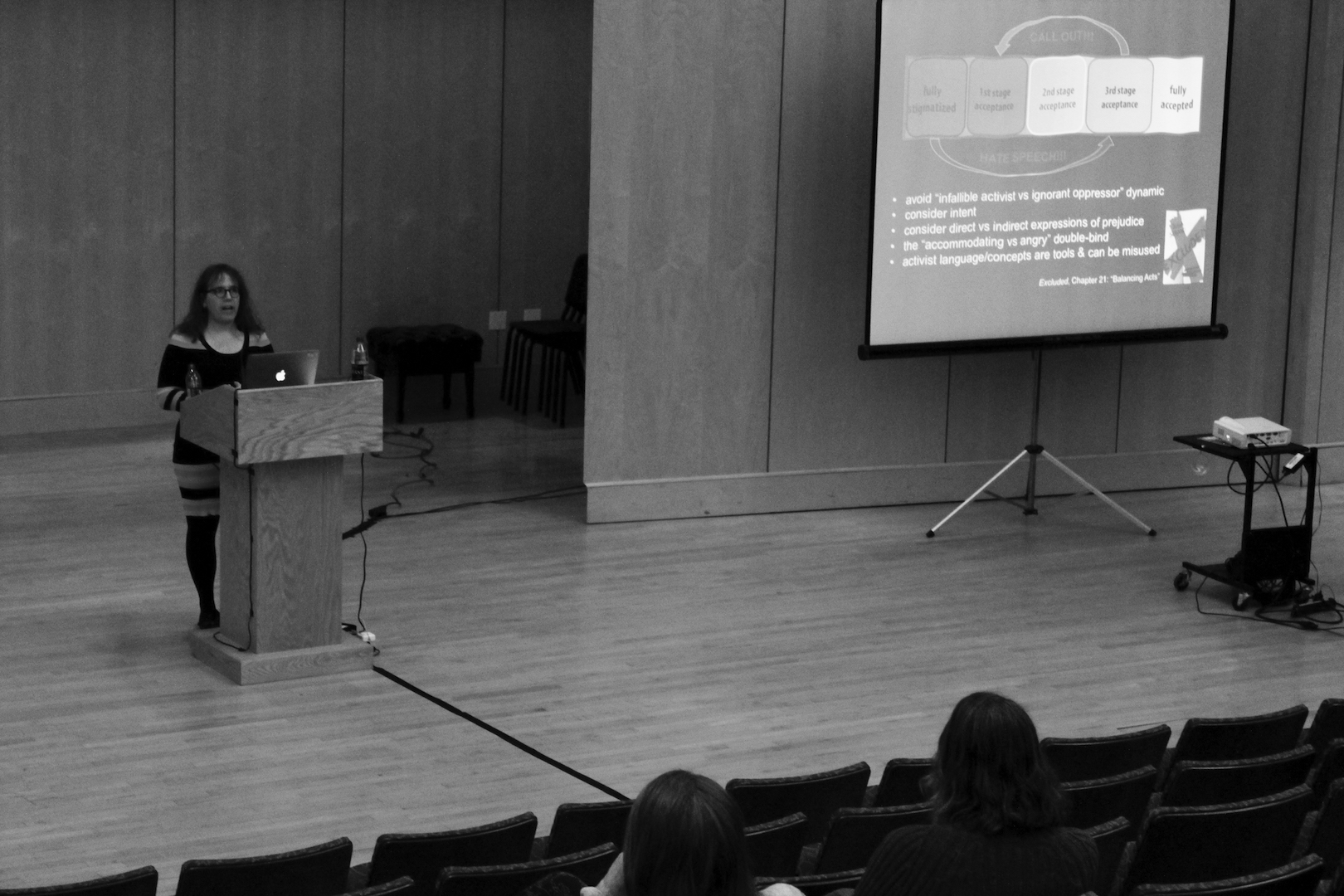 Serano is a writer, performer, biologist, and transgender and bisexual activist, whose works include “Whipping Girl: A Transsexual Woman on Sexism and the Scapegoating of Femininity,” “Excluded: Making Feminist and Queer Movements More Inclusive” and most recently “Outspoken: A Decade of Transgender Activism and Trans Feminism.”

“I think a lot of us feel that social justice is absolutely necessary, and yet sometimes it’s broken or doesn’t work quite the way it should. And so let’s talk about the ways to fix it, make it better,” she said.

Serano said that a rash of mainstream articles written by pundits with no experience in social justice activism that speak of contemporary social justice as getting “out of hand,” and cite the “harm” it brings exacerbate these difficulties. Serano describes their use of memes such as “political correctness” and “identity politics” as wholesale slurs to disparage social justice activism.

“I think of them as vague complaints, in that they’re not really being specific about what’s wrong with activism. They’re just saying ‘activism is getting out of hand! We have to stop these Activists!’” Serano said.

While some may use these memes due to bigotry, Serano notes that many who use the terms think that they “want to make the world better,” and see such activism as hindering that goal. “But when asked what they think about progress that’s been made, like, women can vote now and have careers, or that the South is non-segregated, as it once was, or … people with disabilities are able to move freely and access buildings, or gay people can get married … if you ask them, they usually will say ‘oh, those are all fine, those are all good things.’ Those things did not magically happen!”

The differing viewpoints between activists and non-activists leads to less-than-ideal framework for discussion. To combat this reflexive resistance toward contemporary activism, Serano proposed a different framework, “to move the conversation forward in a more productive way.”

One such aspect in need of improvement pertains to “call-out culture,” a term created by activists to describe the necessity to speak against those who use racist or hate speech. It has been appropriated by pundits to “paint activists as trolls or little snowflakes,” and therefore it is looked at as though activists should be ignored. The term’s modern pejorative use against activists is an inherently biased meme, since “everybody calls other people out.” With that in mind, the advances of social media and the greater intersectionality between activist causes has led to an increased frequency of call-outs. Avoiding “bad or unjust call-outs” requires an understanding that activist language and concepts have the potential to be misused. “Hammers and saws are important tools, but you can also saw people in half or hit people over the head with the hammer. Recognizing that is a good way to move forward with improved discussions.”