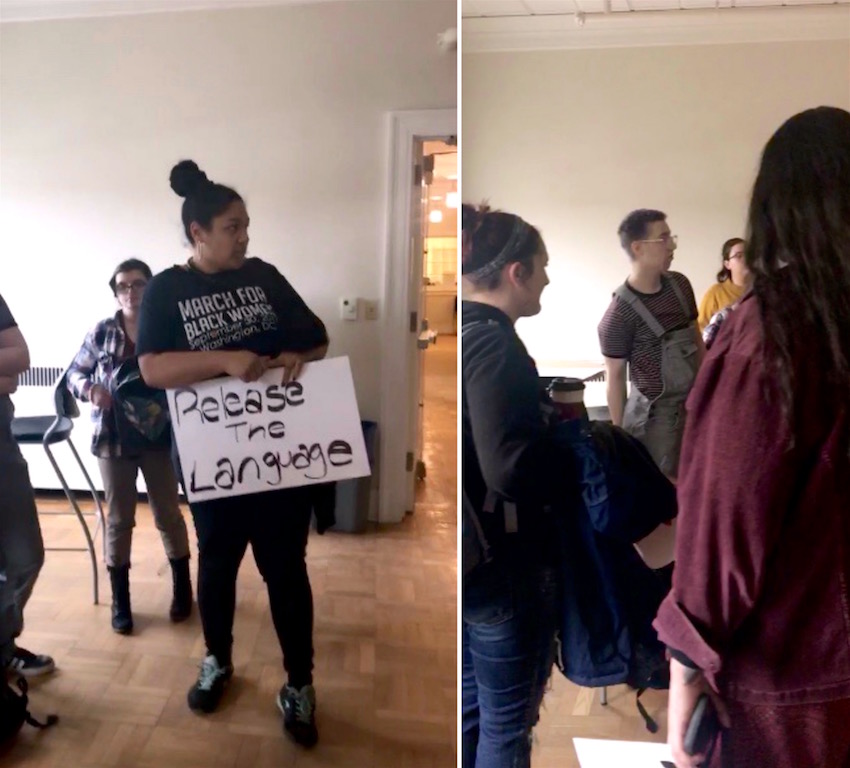 On Thursday, March 1, University of Maine students staged a sit-in protest at a routine Board of Trustees meeting in Estabrooke Hall. They voiced concerns over recent proposed changes to the political affiliation and free speech policies. The public meeting took place in the Rudman Conference room on the second floor. Although the meeting dealt mostly with budgeting discussions surrounding internet and technology projects on campus, 11 students attended to ensure that the board members present were aware of their apprehensions.

The policy in question is titled “Institutional Authority on Political Matters,” and aims to safeguard the university’s non-profit status by restricting faculty and staff from engaging in political action, discourse or discussion on university time or property. This has raised a few eyebrows around campus, as many have expressed concerns that it could stifle faculty and staff’s ability to share their perspectives on and knowledge of their fields of study, and possibly infringe on freedom of speech capacities.

The students present were mainly pushing for more information to be released on the matter, as neither the specific language of the policy nor the date for the scheduled vote have been released.

Kirsten Daley, a fourth-year student and president of the Black Student Union, organized and led the protest. Holding a sign that said “release the language” and backed by a variety of fellow student activists, she explained her message.

“Today we were just trying to push to get them to release the language of the freedom of speech rules they’re trying to vote on to the general student body so that we know what they’re voting on,” she said. “And they also should release when they’re going to be doing this vote. Right now, they said it’s not set in stone and they don’t know when they’ll be voting. But it is important for the student body to realize what is going on behind closed doors; what these rules mean to changes to their faculty and staff’s jobs to their places on this campus, to the place of political action on this campus.”

Daley prompted the board with her questions about the vote date and language, but was met with vague answers and repeatedly referred to Samuel Borer, the student body representative on the Board. Borer was absent from the meeting. Although the Board affirmed that the vote date will take place in March, specifics have yet to be released.

The Board also referred to a March 2017 adoption of a new version of freedom of speech policies, which passed abruptly and has been effective since. That policy states that “free speech requires tolerance for diversity of opinion and respect for an individual’s right to express his or her beliefs, however unpopular they may be, without social or legal prohibition or fear of sanction. Tolerating and respecting another’s views, however, does not mean those views are immune from critical scrutiny. Indeed, it is the university’s responsibility to foster an environment where all are free to critically evaluate the ideas presented to them, and to accept critical evaluation of their own ideas.” The full policy is available for viewing on the UMaine website at maine.edu/about-the-system/board-of-trustees/policy-manual/section212.

Daley’s crucial concern is the ability to stay up-to-date on these issues, saying, “being able to be informed on these topics is the only way we’re going to make sure that we know that our freedom of speech is safe and that our faculty and staff also have that freedom to do political action. Political action has been vital to college campuses since colleges started…and to challenge that and to try to stem political action is only going to make our campus worse.”

According to the UMaine website, “all board meetings are open to the public… The University of Maine System Board of Trustees consists of 16 members, 15 of which are appointed by the Governor and approved by the Maine Legislature.” The information regarding the next meeting has yet to be released.

#YouMaine: Derek Deoul feels right where he belongs at UMaine
Netflix’s “Grace and Frankie” is a friendship love story