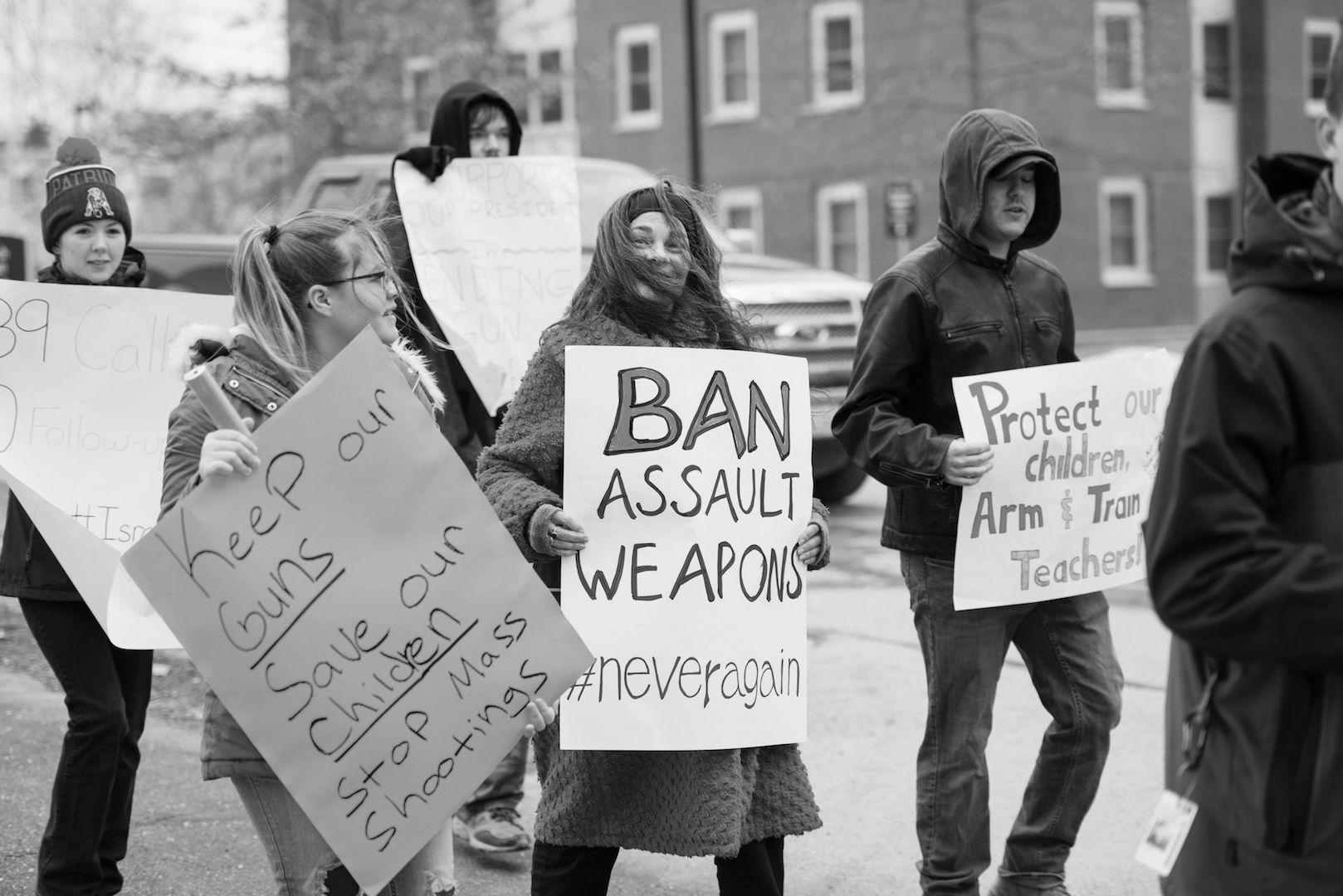 On Saturday, March 4, the March Against Gun Violence was held at the University of Maine. Marchers and counter-protesters gathered at the Emera Astronomy Center bearing signs that included phrases such as, “Protect Our Children, Arm and Train Teachers,” as well as a “NO GUNS” sign held by a small child. The event was organized by Quinn Stewart.

Tensions arose before the march began as heated debates took place between the two opposing parties. “We are here to protest gun violence. The NRA is here to stay,” Matt Miller, a member of UMaine College Republicans, said.

“Arming teachers is not the answer,” Emma Newcomb, a student at the march, said. “My mom works at a school where there is gang violence. So that raises the question as to how arming teachers would actually solve this problem.”

The march spanned from the Emera Astronomy Center to the Raymond H. Fogler Library. Once the march ended at the library, Diane Russell, a gubernatorial candidate, gave a speech to those in attendance.

“I am here today because I want to stand up and support all of you that are marching here to save the lives of the next generation. I grew up a couple hours away from here and I grew up in a gun culture. By the age of 12, I had a doe permit, and I went hunting with my dad and his friends. One thing that my dad taught me is that you do not go hunting with trigger-happy people. You do not go into the woods with people that might accidentally pull the trigger or those that do not know the safety mechanisms of their weapon,” Russell said.

Russell also talked about the shootings that have happened in the past. “We are seeing a significant amount of violence in the media right now. Columbine was my generation, and then there was Sandy Hook,” she said. “We started seeing time after time after time that people were walking in and killing people en masse. And it feels like it belongs to someone else, Las Vegas was all the way across the country. But Parkland was different. Something shifted because the victims refused to be victims. They refused to stand down in a moment where they should have been grieving by all accounts. Instead, they chose to stand up because they have had enough.”

Following this, Russell went on to tell the crowd about how she has been affected by gun violence. She lost several family members to gun violence after they were attacked on their property by a neighbor that they had thought was being friendly. Her mother’s cousin was the only survivor of the attack, as she hid out in the woods until sunrise so that her cell phone’s lit screen would not give away her position.

“This woman is the bravest woman that I’ve ever met,” Russell said. “She couldn’t call until sunrise. Imagine being the woman hiding in the woods and being unable to save your family and able to make one decision: that you are going to survive the night to make sure that you could show up to the courtroom and stare him in the eye and tell everyone what he did to your family with the sheriff who rescued you.”

The day that this verdict was made, the same sheriff that rescued her mother’s cousin got a call that he had to travel a couple of towns over because another mass shooting had occured. “The day that we received our justice, eight other families’ lives fell apart,” Russell said.

After this, Representative Ryan Tipping of the Maine House of Representatives spoke to the crowd. “We have all been going through a thought process since the Parkland shooting about how we can make schools safer. I know that a lot have wondered about how we can get to this place. There have been serious conversations about this in Augusta and D.C. What this looks like in Augusta is a bill we have moving forward regarding stocks, magazine sizes, et cetera. One bill that we are working on is regarding Red Flags.”

Lastly, Quinn Stewart talked for a bit. “The problem of gun violence has spread across our entire nation. The problem did not hit me close enough until the Parkland shooting, where one of my closest friends was among one of the survivors of that shooting. Then it became clear that enough is enough, there is something that we have to do. Whether you’re in favor of gun control or opposed to gun control, you have to admit one thing: that regardless of your position on this debate, we can do something. For those of you holding up signs in opposition today, I say one thing: that you come together with us, that we march together, that we come up with ideas together to actually propose adequate solutions to such a massive problem.”

The event ended with a conversation among everyone in attendance.