UMaine March For Our Lives brings Orono community together 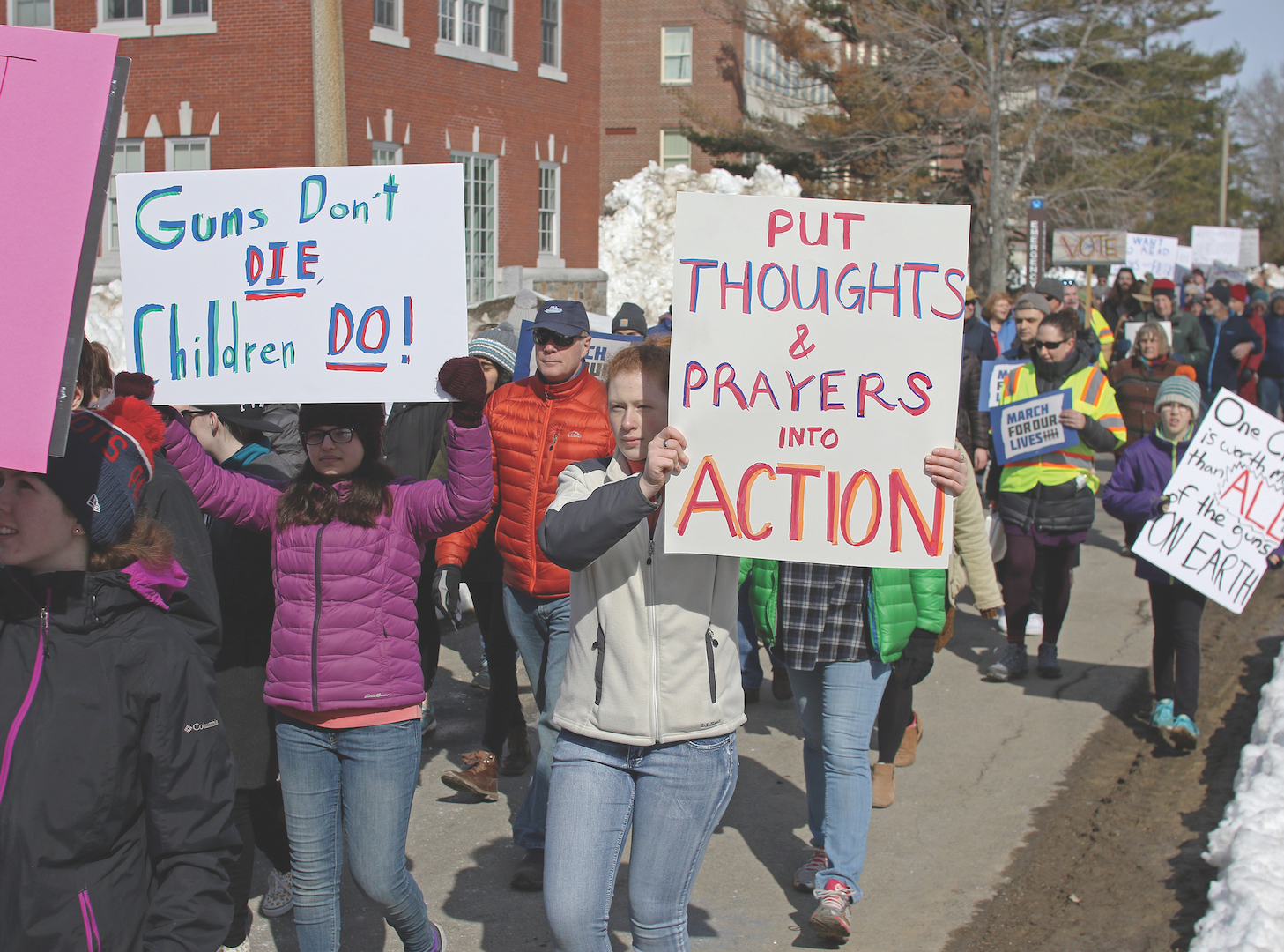 Marchers ask the public to vote in order to bring about change during the March For Our Lives in Orono, ME on Saturday, March 24. Photo by Matthew Lavoie

On Sunday, March 24, the March For Our Lives was held at the University of Maine for the town of Orono. Hundreds gathered to show their support to end gun violence in the United States. This particular march was just one of nearly 800 nationwide.

“I am marching today because you see all the tragedy happening, and I think that it is sad and I want to do something to help and try to do anything I can to just make a little bit of a difference,” Daniele Gold, president of the Maine Peace Action Committee, said. “I don’t want to see it [gun violence] happen in my community.  No one expected to see it in theirs, so it is scary to know that it can happen any time, anywhere. I would really like to see something change.”

The event was organized by the Maine Peace Action Committee (MPAC), which meets regularly on campus. “We want to create peace among everyone and change the way injustices are faced and make sure that when we do face those injustices, we do so in a healthy way and bring people together on campus and within the community to make change in all sorts of things,” Gold said.

The event brought in members of the community from as young as elementary school students to seniors. It began around 10 a.m., with members of the Orono community toting signs in solidarity that something within our culture must change, and schools need to become a safe environment for students again.

Included in the attendance was co-chair of the Feminist Collective, Taylor Cray. “I am marching today because I am concerned about safety,” Cray said.

“We should not have to be in fear when our children are stepping into a place where growth, opportunity and learning should be happening,” Gold said. “I stand here today because we will not accept another life to be taken away by a shooter. We stand here today in memory of those lives that have been taken. We are here today to try to change the way that guns are controlled in our community, in our state and in our country. We are marching today for all of our lives.”

The increase that the U.S. has seen in gun violence through recent years has inspired many UMaine students to take a stand and become activists. Erin O’Malley, a first-year English student recently joined MPAC. “The Parkland shooting in particular really kind of inspired me to do something about an issue that I have passionate about for a while. I think them speaking out just seemed different than the other shootings, and I was really, really mad about it and just wanted to do something to bring awareness. The March For Our Lives being a national thing is just a good way to show solidarity and bring activism to the community.”

“I am a new member of MPAC and I joined at the perfect time. It’s just such an important issue [gun violence] to me to see the tragedy that’s been happening. I can’t fathom the pain that so many families have to go through on such a very regular basis because of something that could have been prevented. That speaks to me, especially as a student,” Loren Hubbard, a second-year new media student at UMaine, said.

Following Golds introduction to the event, the floor was open for speakers to stand and express their concerns. The first to speak was McKenna Baker, a senior at Hermon High School.

“I have a younger sister, she is 15 years old,” Baker said. “We didn’t get along when we were younger, but we do now. She will be able to drive soon and get a job, and I couldn’t be more excited for this next chapter of her life that she is about to enter, which is why I’m so afraid that she might not get there. Some kid could walk into our school with a gun tomorrow and take my sister’s life. She could miss driving for the first time by herself, spending time with friends, prom, graduation and so much more. The very thing that I am so afraid of has happened to so many others. All the while, America has stood by, silent, thinking that the change doesn’t start with us. But it does, and the change starts now.”

Included in the attendance of the event were those with opposing views. While their signs encouraged the message that, “guns don’t kill people, gun-free zones do,” they were in agreement that children’s lives should not be taken away. Both sides of the debate were civil with one another and following the march, those in opposition dissolved into side conversations with the marchers.

Next to speak was Emma Hargreaves, a junior at Old Town High School. “I am afraid, I am angry, I feel helpless and I feel alone. I feel like the rest of the world is spinning as normal, but for those of us that climb school steps each weekday, it is off axis. I am a lucky one. I can type this message with the rage it must be written in. The unlucky ones are dead. They died afraid and angry and helpless and alone. They died from a bullet in a place where bullets should not go. They died and they shouldn’t have. They were kids that should have lived long enough to become parents. My parents have different reasons for similar feelings.”

“We have seen too many yearbook photos beside condolence messages. I am sick of living in a before that I know will soon become an after. Sadly, it is a matter of when, not if. I am sick of worrying that the body count will include my own.” said Hargreaves.

“I was 12 years old when a man shot into a movie theater during a showing of Batman. I went and saw the movie a month later and was afraid,” Baker said. “Sandy Hook happened when I was 13. My friends and I cried for them, I thought about my sister. When I was 15, a hate-filled man killed nine people at his college in Oregon. I wondered if my future was as exciting as I thought it would be. I was 16 when a man killed 49 people in a nightclub. I decided that staying in was the way to go. I was 17 when a man shot and killed 59 people at a concert. I figured that listening to that music on my phone wasn’t that different anyways. I am 18 and a man killed 17 people in a high school in Florida. I decided that this was not the life I wanted for my children. I decided that never again will I decide that this is normal.”

As the march around the University Mall began, 11-year-old Owen Beane took the steps and began speaking. “I go to school every day and I am tired of hearing about another shooting. I do not want to live every day in fear, we need more security and I definitely have noticed an increase in school lockdowns and this cannot be acceptable. We need to do something anything we can to not have people in danger every day in a place where we go to learn and have fun.”

Beane was hesitant to attend the event at first. “His resistance to attending the event wasn’t in the subject matter,” his dad, Greg said, “it was purely because he is 11 years old and it’s early and he had the ‘I would rather stay home and play with my legos’ mindset. I talked to him and gave him a pep talk on how to stand up and be a part of this and that hopefully impressed him a little bit.”

Owen Beane then walked down the steps of Fogler Library, megaphone in hand and led the march with chants. As the groups dispersed, the message was clear: in order for change, people must come together, despite what politics are held, and share ideas on how to change the culture that has become all-too-normal in the U.S.