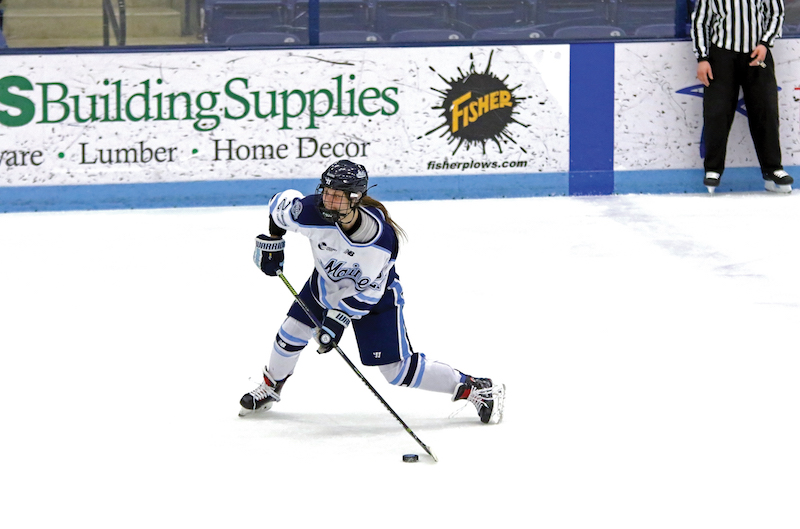 The No. 10 University of Maine women’s hockey team (19-14-5) traveled to Boston, MA to play against the Huskies from Northeastern University (18-16-3) in the Women’s Hockey East Semifinals on Saturday, March  3. Unfortunately, Maine’s season came to an end as they fell to the Huskies 2-1. Maine made history Feb. 23 when they defeated Boston University in the quarterfinals, which was their first playoff win in program history.  This was also Maine’s first appearance in the semifinals since 2006. For the Huskies, this was their eighth straight season competing in the conference semifinals

Starting in between the pipes for the Black Bears was second-year Carly Jackson, who became the first Black Bear goalie to finish the regular season with the lowest goals against average in Hockey East (1.88).

Starting in between the pipes for the Huskies was first-year Aerin Frankel, who was named Hockey East’s Pro Ambitions Rookie of the Week, after making 44 saves on 47 shots against the University of New Hampshire.

Early in the first period, Maine got on the board first when first-year Daria Tereshkina scored off an assist by second-years Tereza Vanisova and Brittany Colton, 1-0.

Towards the end of the period, the Black Bears went on the power play after a Northeastern penalty for goalie interference. After two minutes on the man advantage, the Black Bears couldn’t convert.

The Huskies equalized off of a goal by first-year Veronika Pettey with less than a minute left in the period. After 20 minutes of play, Northeastern led Maine in shots on goal, 6-5 and in face-offs won, 10-9.

In the second period, the Huskies went on the power play after a Maine tripping penalty, however, they couldn’t capitalize on the two-minute advantage.

Then, the Black Bears went on the power play after a Huskies high sticking penalty. However, Maine could not capitalize on their opportunities, keeping the score tied at one.

After 40 minutes of play, the Huskies continued to lead the Black Bears in shots on goal, 21-10 but both teams were tied in faceoffs won, deadlocked at 19.

The Huskies took the lead when second-year Matti Hartman scored her eighth goal of the season off of assists by fourth-years McKenna Bran and Denisa Krizova. That would be the last of the scoring as Northeastern went onto win 2-1.

Recently named Hockey East Coach of the Year, Richard Reichenbach will have some decisions to make for next season when it comes to replacing the five seniors that will be graduating, most notably fourth-year Brooke Stacey. With how young his team is, and now having them gained playoff experience, this should not be too much of a challenge.

Northeastern captured their first Hockey East title with a 2-1 win over the University of Connecticut. They had previously won three Eastern College Athletic Conference titles.