A little hall with a big, complicated history 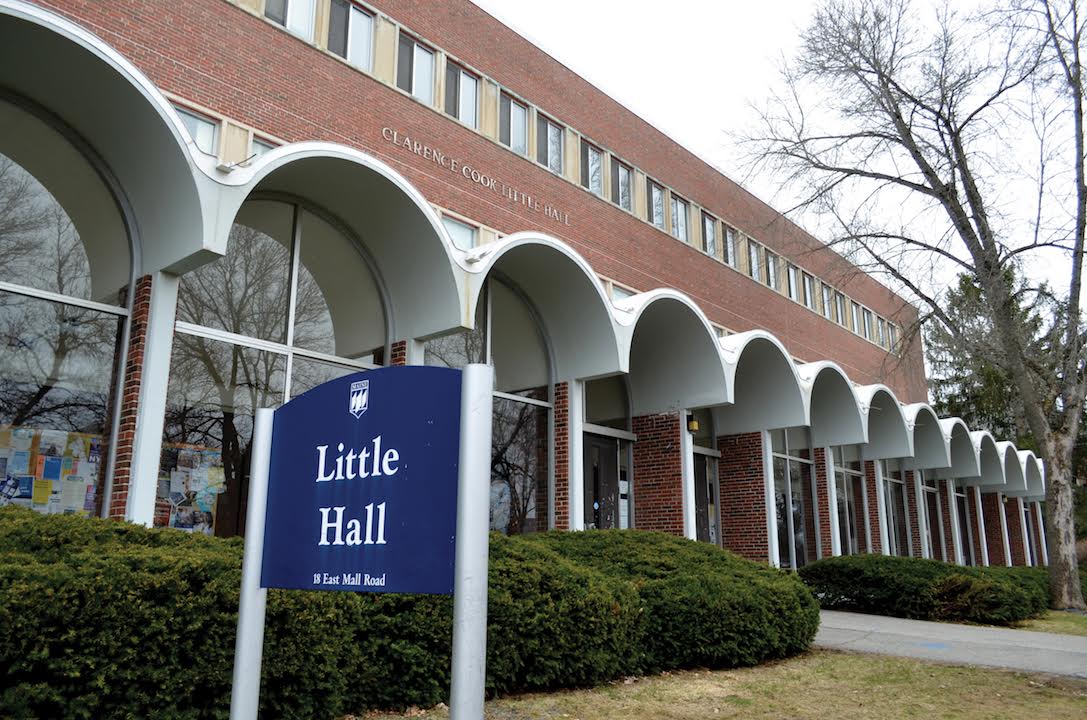 A view of the front of the Clarence Cook Little Hall at the University of Maine (4/19/18). Ian Ligget, Staff.

In the middle of the University of Maine mall sits Little Hall, named after the president of UMaine from 1922-1925 and founder of Bar Harbor’s Jackson Laboratory, Clarence C. Little. The building is home to the departments of Psychology, Modern Languages and Classics, as well as the Franco-American Studies Program. Little Hall sees droves of students every year dedicated to furthering UMaine’s mission to improve the quality of life for people in Maine and around the world.

The building has recently become a focus of controversy beyond its strange design (which creates a second-and-a-half floor). Because, while Clarence C. Little was responsible for getting the university far more funding than it had ever seen prior to his presidency, he was an active eugenicist and eugenics promoter and an outspoken proponent of the tobacco industry. These conflicts make students wonder whether the building should still be named after Little.

Fourth-year psychology student Souban discovered the origins of Little Hall’s name when a friend told her about it. “The University of Maine prides itself for providing an accepting environment for [its] students, so having a building named after Clarence C. Little seems counteractive,” she wrote.

The University of Michigan already changed the name of its science building associated with Clarence C. Little during his time as president there, stating that “memorializing his name on a science building is problematic for two key reasons. First, Little helped contribute to and popularize a now discredited approach to population management – eugenics – that sanctioned identification and sterilization of ‘unfit’ individuals as well as the identification of superior and inferior races. And second, Little contributed to the development of political strategies designed to delay any serious response to the scientific findings that smoking was associated with lung cancer,” a UMich name change request stated.

“Little held on his beliefs of eugenics throughout his entire career. The building that bears his name supports a narrative [that] the University of Maine condones his unethical behavior,” Souban wrote.

At UMaine, Little was responsible for facilitating the building of the Memorial Gym and Field House, as well as for creating orientation programs for first-year student. UMich’s decision to drop the name has sparked talked of response and consideration from UMaine.

The UMaine is not alone in this controversy. Many communities have found themselves in similar situations when faced with the question of whether or not to commemorate individuals that have championed troublesome behaviors or promoted racist, bigoted beliefs.

“In my opinion, I think the university should remove the name from the building and replace it with another name. There are many people who have done a lot for the university, so it should not be hard to find a new name,” Souban wrote.