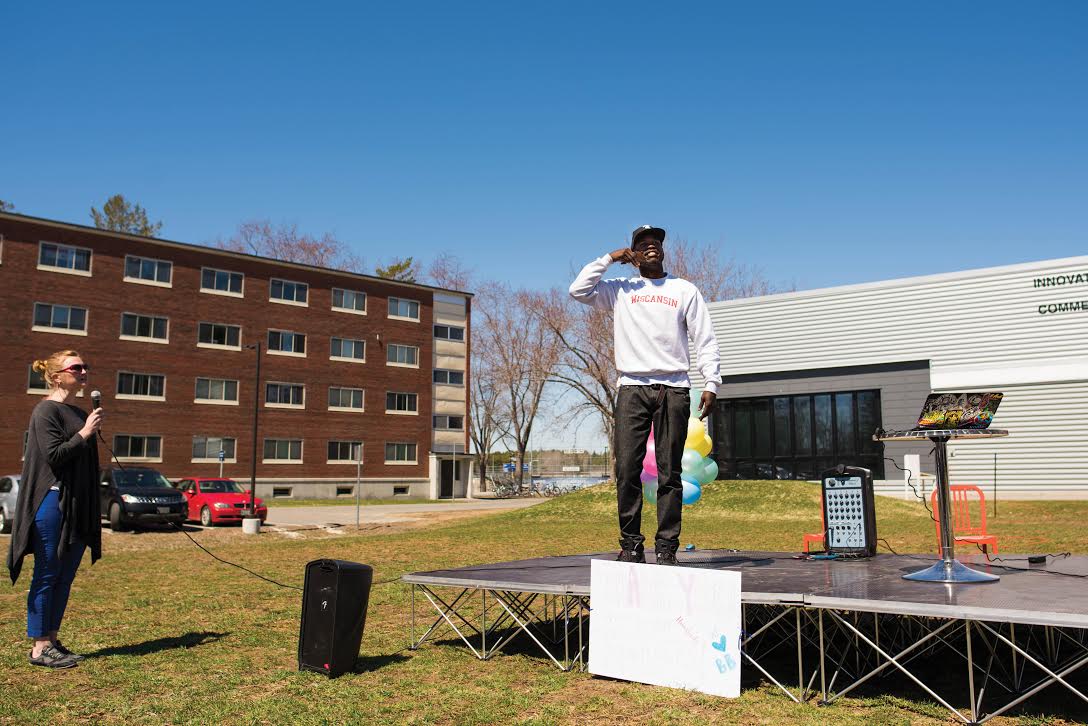 On April 22, the Best Buddies chapter at the University of Maine held their annual Best Buddies Friendship. This year, however, the event was named after Daniel Scott, a buddy that recently died.

The Daniel Scott Best Buddies Friendship Walk began in the Stewart Quad, where a community of over a hundred people gathered to play lawn games, mingle and share stories with one another. This year, the organization was able to bring Matt Maxey from Deafinitely Dope, a musical performer that aims to unite the hearing and Deaf community through his use of music and sign language. Maxey, who attended Gallaudet University on a presidential scholarship, hopes that through his work, he can break barriers to create an outlet where others who experience a struggle with identifying can find peace, unity and enjoyment, according to his website.

The event was free to attend, but $5 donations were recommended. The money goes toward sending the new executive board of the club to the annual Best Buddies Leadership Conference. The conference has been held for the past 29 years, where thousands are inspired to bring change to their communities. The UMaine chapter of Best Buddies hopes to raise $1,500 from the event. Local businesses also contributed food and prizes for the event. The prizes were raffled off, along with T-shirts that had the Best Buddies logo on the front and a photo of Daniel Scott on the back.

“The whole purpose of it [Friendship Walk] is to spread awareness to our community members are they should not be shut out or forgotten. We’re going to walk around the mall and then Matt from Deafinitely Dope is going to perform. A big part of today is to make sure that all of our allied communities are actually allies and to raise awareness that even if you don’t self-identify as having a disability, it does not mean that you should turn away from somebody that does, or vice versa, and to build connections throughout our community,” said Adya Plourde, president of the UMaine chapter of Best Buddies, said.

Among the many in attendance was Laura Edmondson, who manages several of the Best Buddies programs throughout Maine, New Hampshire and Vermont. Edmondson drove to the event from Concord, New Hampshire to show her support.

“I have a special ed degree and I focus on Deafness as my field of study. I went to work at a Deaf school and found myself very drawn to the kids that had multiple disabilities and just really enjoyed working with that population. When I moved on from there, I went and worked at a K-2 school and worked with some kids that were nonverbal and used American Sign Language (ASL) as a way to communicate. From there, I knew that I wanted to continue to work with kids and students, but I did not necessarily want to be in a school full-time, so Best Buddies was the perfect place for me to be. I love my job,” Edmondson said.

“We’re here to break barriers and make connections,” said Amy Teets, who was in attendance with Maxey, said.

At the event, there was support from Pi Kappa Phi, whose philanthropy project is centered around Best Buddies. Tyler Gagne, a fourth-year finance and management major, was thrilled to be able to participate in the day’s events.

“My freshman year, I joined the fraternity and a couple of the brothers were also a part of it and showed it to me. I have entirely enjoyed my time with the organization. There are great people involved with this great cause. Every group outing that we’ve had has its own memorable thing. We go to hockey games, basketball games, dances, etc. Seeing the buddies dance and having a great time just warms my heart,” Gagne said.

“My little sister has special needs, so all throughout high school, I worked at the Special Olympics and really wanted to continue on campus,” Marybeth Colby, a first-year elementary education student said, “Best Buddies means acceptance and taking in everyone and not caring.”

“It’s my first time in Maine, being from Atlanta,” Maxey said,  “We want to talk about ways to make ASL more accessible to people all around, no matter if they’re deaf, hard of hearing, or hearing. There are different ways on how to interact with people in everyday life. People do not realize how much ASL is a part of life, even if it’s unintentional. It’s time to make it easier for people to realize that you can communicate with ASL, whether you’re through a window, underwater, or a distance away. I started [studying ASL] in 2006 during my first year of college. This is my first time working with Best Buddies, and I’m excited to be here. I’m very curious and want to learn more about the organization because I really like what I have seen so far. I’m excited to see what Maine is about and I’m enjoying my time here to soak everything up.”

Maxey took the stage just before the walk to share his involvement in the walk. He had an interpreter on stage, and he switched off between speaking and having his interpreter translate.

“I am Deaf. I grew up with speech therapy, and I was always in a mainstream hearing school, and I was always around hearing classmates. Even in honors classes, I was forced to socialize with hearing peers. I did not know anything about the Deaf culture or the Deaf community, I didn’t know that people even used sign language until I got to college.” Maxey said.

Maxey’s mission at the event was to show the alliance between various communities. His group, Deafinitely Dope, was created to have something in the mainstream media where the Deaf community is represented.

There were over a hundred community members in attendance. Best Buddies has a GoFundMe page set up and a Venmo account for donations. To get more information, visit gofundme.com/BBFW2018.

Baseball Earns Split in Doubleheader at UMass Lowell
A little hall with a big, complicated history