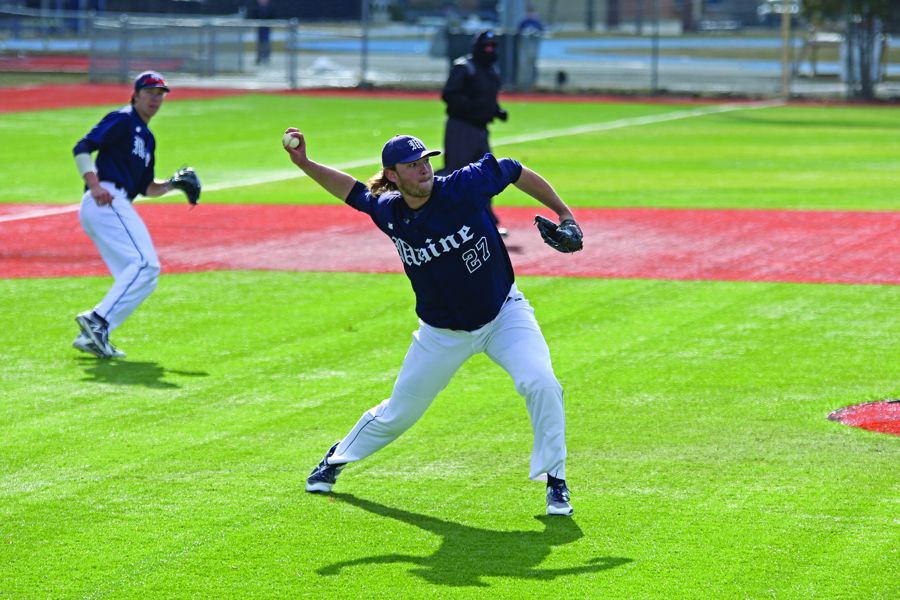 Starting on the mound for the Black Bears was fourth-year Zach Winn, who is 1-0 this season. Getting the nod for the Pioneers was fourth-year James Taubl, who made the Northeast Conference (NEC) All-Tournament Team last season, while leading the team with five wins.

In the first inning, third-year Danny Casals hit a homer to the left field, making it 1-0. That was Casal’s team-leading fifth home run of the season. However, Sacred Heart responded when second-year Elijah Brown tied the game up after a walk.

Then, the Pioneers increased the lead to two when redshirt second-year Jake Frasca scored off another walk, resulting in a pitching change for the Black Bears. Fourth-year Connor Johnson came in for Winn.

In the bottom of the third, Maine made another pitching change, putting second-year Trevor DeLaite in for Johnson. Sacred Heart increased their lead to four when redshirt fourth-year PJ DeFilippo scored off of a wild pitch, followed by a groundout that led to second-year Stephen Thibault crossing the plate.

In the bottom of the fourth, the Pioneers took to the board again when fourth-year Dan Schock scored to make it 6-1. The Black Bears made it 6-2 when second-year Kevin Doody stole third and scored on a Sacred Heart throwing error.

Casals then brought Maine within three when he hit his second homer of the day. Then, fourth-year Christopher Bec hit a homer of his own to make it 6-4. Doody followed that up by  driving in third-year Colin Ridley on a fielder’s choice to make it a one-run game.

In the top of the seventh, the Pioneers got a two-run home run to make it 8-5. The Black Bears would pull within one when Doody brought fourth-year Jonathan Bennett on a fielder choice in the eighth. Bennett hit a single to center to score two to make it 8-8 in the top half of the ninth. However, in the bottom half of the inning, Sacred Heart would hit a walk off single, winning the game 9-8.

The University of Maine baseball team played their second game of the day on Friday, April 13 against Monmouth University. Maine defeated Monmouth 15-10. The Black Bears have an overall record of 8-4 with the Hawks, having first met in 1989.

Starting on the mound for the Black Bears was fourth-year John Arel, who is 3-0 this season. First-year John Martin got the nod for the Hawks.

In the first inning, the Black Bears got on the board first when Bec singled to left field, which then scored third-year Jeremy Pena. Maine increased the lead to two when Bennett singled to the right side, scoring Casals.

The Black Bears kept coming when Ridley doubled to right center, scoring Bec to make it 3-0. Bennett then increased the lead to four in the top of the first. Ridley then scored, making it 5-0 early in the game.

Monmouth put three on the board when first-year Sean McHugh hit a home run, which ended up scoring two others to make it 5-3. Bennett then hit a long ball which gave Maine a 6-3 lead.

Then, second-year Cody Pasic hit a double to drive in Ridley to increase the lead to four. Doody hit a two-out single to the right to bring Bec around to make it 8-3 in the top of the fourth. Pasic then got hit by a pitch which resulted in a walk home for Bennett making it 9-3.

Casals then hit his third homer of the day to make it 10-3 in the seventh. Bennett then singled, scoring Bec to run the score to 11-3. Monmouth made things interesting in the bottom of the inning when first-year designated hitter Ryan Steckline singled in a run. A hit batter and a walk with the bases loaded plated two more runs and brought the score to 10-6.

The Black Bears would continue the scoring in the ninth, making it 15-6 off a three-run homer from Ridley and a single by Pena with the bases loaded. The Hawks would score again, with Koniencki coming home on another bases loaded walk to make it 15-7. The Hawks would pick up three more runs on a bases-clearing double by third year center fielder Kyle Norman. Maine would hold win on to pick up the win.

In the first inning, the Black Bears scored first when Casals scored on a Monmouth fielding error. Second-year Hernen Sardinas made it 3-0 in the third when he hit a two-run homer. The Hawks would stay in the game when Norman cleared the bases with a triple to knot the score at 3-3

Monmouth then took a 4-3 lead on a sacrifice fly from first-year third baseman Matt Graber. The Hawks increased their lead to two in the sixth inning on sloppy defense by the Black Bears. In the bottom of the eighth, Monmouth made it 7-3 after third-year catcher JD Andreessen launched a two-run homer.

Silva was touched up for four runs on six hits over five innings on the game. He walked four and struck out three with a hit batter. Dennis was sharp for the Hawks after a rough start, finishing the afternoon giving up three runs (two earned) on five hits while walking two and striking out eight over seven innings.

Up next for the Black Bears will be a home game against Saint Joseph’s College of Maine on Wednesday, April 18. The first pitch is scheduled for 4 p.m. The Hawks return to the field on Tuesday, April 17 when they host Rutgers University. The game is scheduled to start at 3 p.m.