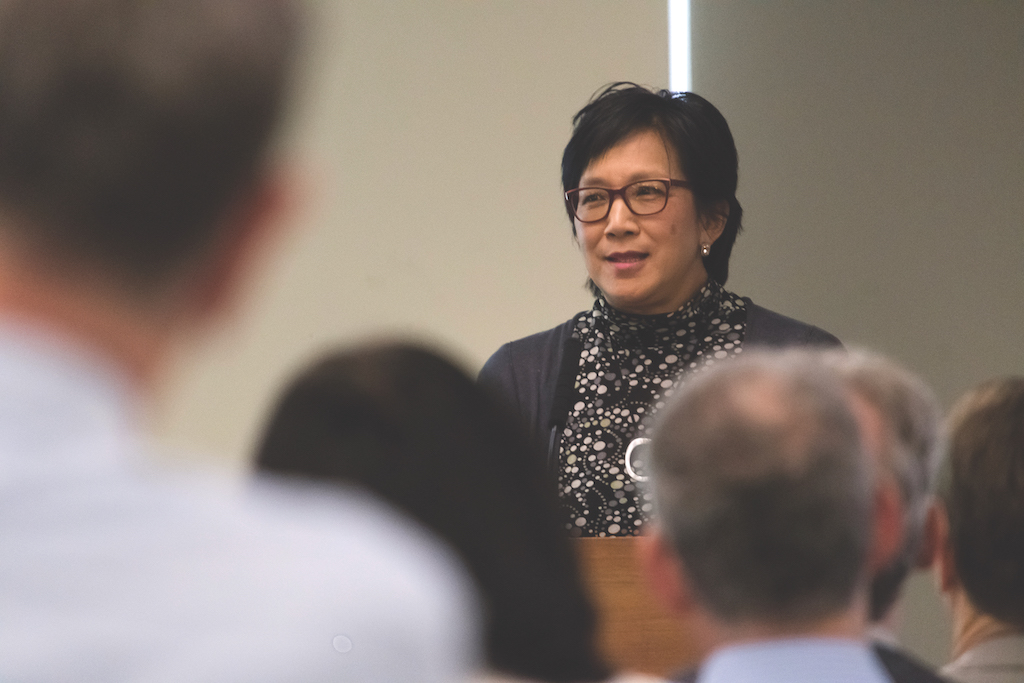 On Friday, April 20, the University of Maine hosted a public talk by Patricia Wen, editor of the Boston Globe Spotlight Team. A three-time Pulitzer Prize finalist, Wen took over the six-member team of investigative reporters in 2017. The talk was part of the Stephen E. King Chair Lecture Series. Now in its inaugural year, the series was founded with a $1 million gift from the Harold Alfond Foundation in honor of UMaine’s most published alumnus.

More than 200 people filled the the Wells Conference Center for the public lecture that addressed investigative journalism in the current age. Following introductory remarks from President Susan Hunter and Provost Jeff Hecker, the inaugural King Chair and Shakespeare scholar Caroline Bicks introduced Wen to the audience.

With over 30 years of reporting experience, Wen is the first female and person of color leading Spotlight. The team was recently named the 2018 Pulitzer Prize finalist in local reporting for a seven-part series that explored the racism that black residents experience in Boston.

“The history of racism in Boston and the reputation of the city sparked a public debate,” Wen said about the series. “This story lives on, people all over the country email us about it.” Since running the series titled “Boston. Racism. Image. Reality,” the Spotlight Team has been invited to more than 50 forums.

In her talk, Wen shared with the audience a progression of journalism through her experience in the field, from typewritten articles that were transported through tubes to people who printed them, to the watchdog role of editors that was vividly felt in newsrooms before the internet.

Wen’s first reporting job was at The Star-Ledger newspaper in Newark, New Jersey, where her editor Lenny Fisher constantly asked reporters if they fact-checked everything thoroughly and whether or not they covered both sides of the issue.

“We were responsible for getting news as right as possible, because as a reporter, your reputation is all you have,” Wen said.

During her talk, Wen spoke about the mistakes she’s made throughout her career, as well as the times she stood by her written work. She emphasized that reporters are not always right, but they always strive to seek the truth.

In 1986, Wen got a job at the Boston Globe’s Metro section and after a few years, she was asked to join the Spotlight Team.

“This was a dream come true for me,” Wen said. “It was like a role of a detective. I am a daughter of immigrants from China, and I felt that my parents and many immigrants tried to decode things and understand how things work here.”

During the talk, Wen mentioned the 2015 Academy Award-winning movie “Spotlight,” a film based on the Boston Globe reporters who uncovered a child molestation cover-up by numerous Roman Catholic priests in the Boston area. Although Wen was not part of that investigation, she referred to the movie’s authenticity in its depiction of the team working in a basement office. “Reporters could spend months looking through records,” Wen said. “This painstaking process of figuring out the background of everybody, asking for documents, xeroxing them one by one was time-consuming but very meaningful.” For its reporting on sexual abuse by priests and the subsequent effect the coverage had on the Roman Catholic Church, the Boston Globe’s Spotlight Team received a 2003 Pulitzer Prize in Public Service.

Wen shared how impressed she was by the “Spotlight” movie. “It made seem interesting a lot of things that are actually boring,” Wen said. “It really showed people how much work goes into it. I hope that along with other things, this movie makes people appreciate our work.”

She also mentioned the 1976 movie “All the President’s Men” and the 2017 movie “The Post.” Both movies revolve around The Washington Post’s coverage of the Pentagon Papers and the Watergate Scandal. “It’s a Hollywood depiction,” Wen said. “But on another level, they depict the political and financial tensions that go in the newsrooms.”

Wen spoke about the shrinking newsrooms and the decrease of substantial news coverage.

“Media is deeply divided in today’s America,” Wen said. “I see a revenue crisis, but I also see a lot of light in this darkness.”

She credited her positive stance on the state of current media to the digitalization of our society.

“People refer to investigative reporters as this elite team, but with everything being digital, you can get everything we can get online,” Wen said. “In the old days, if you missed a story in the paper it was over, but now you have archives and digital versions of news articles.”

Wen sees the greater access to public information as a positive. “There is a greater variety of voices that can be heard,” Wen said. “Without the smartphones and cameras, people wouldn’t be able to document what happens in law enforcement and in minority communities. We have access to information that would otherwise be invisible and unavailable.”

The rise of social media wasn’t the only change that Wen noted. “Beats have also changed now,” Wen said. Over the years, the Boston Globe cut certain areas of interest, also known as beats, and replaced them with new ones, such as gender, race, social justice, aging baby boomers and income inequality, to name a few.

Second-year student Matthew Loranger found out about the talk from his business law professor.

“It was something I’m glad I went to. It was really interesting. She spoke about how media politics and news sources are related. The biggest takeaway for me was that you can’t use one news source. You’ve got to do the work yourself and go digging or take the information from a bunch of sources and find the answer,” Loranger said.

In her concluding remarks, Wen shared her hopeful outlook for the future of journalism.

“Some people say it’s the golden age of investigative reporting,” Wen said. “I wouldn’t go that far but I do have a lot of hope. Most people are fair, truth-seekers and have fundamental values. I think people can detect truth.”

Wen gave some advice to rising journalists. “Look for good stories wherever you are,” Wen said. “Work as hard as you can, find good mentors, and if you don’t have a regular journalism job, think of yourself as a journalist startup company and look for good stories, pitch them as a freelance reporter, try to get a lot of clips and cultivate relationships.”

Wen also expressed admiration for young reporters she’s met. “They have a passion to be accurate, to seek justice,” Wen said. “They are far savvier than I ever was at their age. My hope is I can blink and see a next generation of journalism that’s stronger than ever before.”