Caribbean Club brings the feast and fun of Carnival to campus 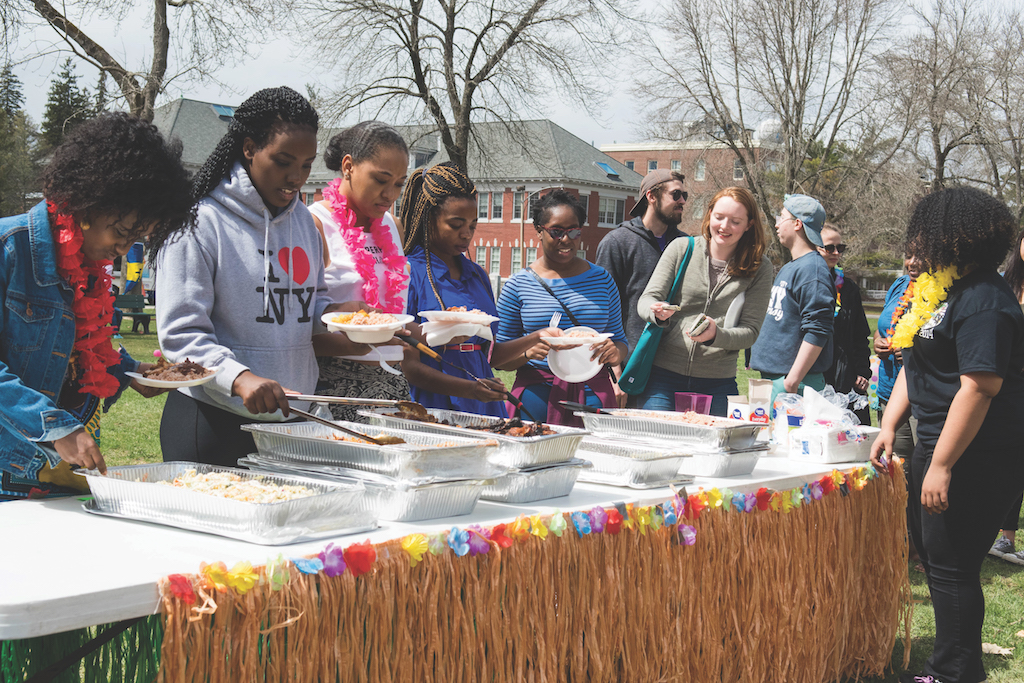 Saturday the fourth annual Carnival was held on the mall, bring a taste of Caribbean culture to UMaine. Photo by Evan Loignon, Staff.

Last Saturday afternoon, April 28, the Caribbean Club invited the student body to their fourth annual Carnival celebration. This year, they brought the festivities out on to the Mall, filling the air with the smell of Caribbean food and the sound of island music.

Guests were given colorful leis as they flocked to the front of the Library to partake in dancing, soccer, community and free food. Caribbean club’s ten members decorated the Mall with flags and banners, served copious amounts of food and encouraged lots of dancing as part of the celebration.

“My favorite part of carnival was probably the community aspect,” Skylar Rungren, a first-year engineering student, said. “I’m friends with some of the people who put the event on and to see them happy was really nice. The games were really fun and it was clear they put a lot of work into this event.”

With tables covered in dishes catered by Jamaican Vybz, Carnival allowed students to try cuisine from many different Caribbean countries. Enjoying plates full of jerk chicken and oxtail, students sat on benches and picnic tables listening to music. The Carnival gave students a great reason to take a break and have fun before their final week of classes.

“UMaine doesn’t have a lot of diversity, so it’s important to provide a space for people to come together and celebrate culture,” Naedia Clarke, fourth-year student and Caribbean Club President, said. “It’s amazing how much even a little club like us can spread knowledge and visibility across campus.”

Carnival originated as a catholic celebration in Italy during the 18th century. It quickly spread around the world, and is now primarily observed the Caribbean islands and many parts of South America, Europe and North America. Similar to Mardi Gras, Carnival is a celebration which involves feasting and celebration the day before the fasting of Lent.

“Traditionally, Carnival is held in February, when it’s much warmer in the Caribbean than it is here,” Clarke said. “In past years we held it inside of the Memorial Union. This year we wanted to celebrate outside in the sun and have an all out good time.”

As the semester comes to a close, many students and campus organizations are thinking about what next year will bring. Next year’s Caribbean club President Gabriela Jusino, a second-year art history student, has big hopes for their club’s community and campus education.

“Next year we hope to make things even bigger and better,” Jusino said. “We want to break the stereotype of the Caribbean being nothing more than a vacation spot. The Caribbean islands are all so different, they aren’t all one homogeneous culture. We are excited to share that on campus.”

While the afternoon started off cloudy, Caribbean club brought the sun out on Saturday, making campus feel like summer had arrived a little early.

“In Caribbean culture, good music and good food are staples of a good life. I think they are good staples in anyone’s life, and we loving bringing that to campus,” Clarke said.