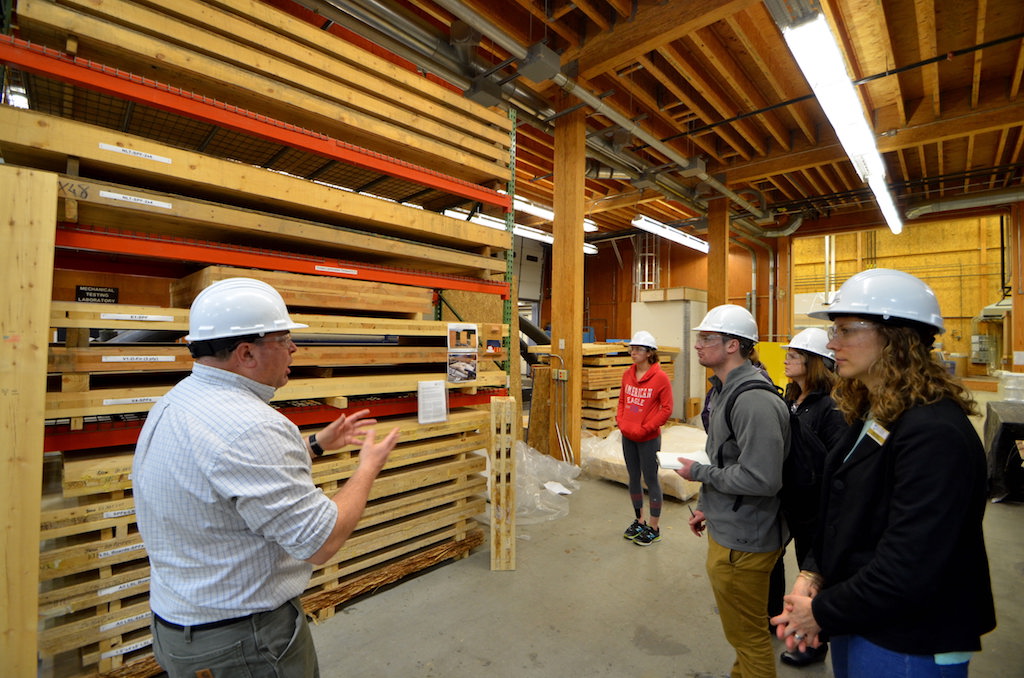 A look inside the wind and wave lab at the Advanced Structures and Composites Center. Photo by Ian Ligget, Staff.

Last week, the University of Maine took part in their annual Earth Week starting on April 16 and ending on April 22 that celebrated Earth Day across the globe. Throughout the entirety of the week, the university’s Office of Sustainability — in collaboration with other local and campus organizations — hosted over 20 events related to sustainability and environmental awareness. In case you missed it, here is a look into a few of the events that took place this week.

The composting facility put in place features a 10 foot by 40 foot enclosed, automated composting unit called the EarthFlow 40, which is manufactured by Green Mountain Technologies.

The facility takes all of the approximately one ton of pre-consumed organic waste produced at all three of the dining halls on campus, in addition to the Marketplace in the Union, each day, combines it with a measured ratio of horse bedding — provided by Witter Farm — and puts it through an 18-day process. At the end of this process, the final product is not a fertilizer, but a soil enhancer. According to Mark Hutchinson, an extension professor with the UMaine Cooperative Extension program, 99 percent of the compost made is turned around and used back on the UMaine campus for landscaping purposes. The other 1 percent goes to local outside sources throughout the area.

Besides benefiting the university and the local community by providing its output of product, it also serves as a great place for educational opportunity. The university cites the location as having been used as a demonstration site for students, individuals and potential commercial users. In order to start more conversations and educate more people, talk has begun about opening such learning opportunities to all at the university. Such an idea, however, is not one that will likely be seen within the next year.

“Dynamic Earth” is a planetarium simulation experience that brings viewers high above into space and deep below under the water’s surface to encapsulate the complexities of the Earth’s climate system. Viewers are guided by the narration provided by Liam Neeson on a journey that, among other things, explores the impact of plate tectonics, the influence of the carbon cycle, and the capabilities of the Earth’s magnetic field in order to touch upon what shapes the Earth’s climate.

The 2012 film is approximately 25 minutes long and is not recommended for viewers who are prone to motion sickness.

UMaine’s Alfond W2 Ocean Engineering Lab, a wind and wave lab, is one of the most unique facilities owned by any university in the United States. There are only half a dozen of these types of facilities at universities throughout the country and Orono is home to one of them, but many people may not know its purpose or just how technologically profound it is.

The lab can simulate storms up to the strength of Category 1 hurricanes, so that companies can test offshore energy producers’ ability to withstand heavy storms. The university works with private companies to develop the sustainability and durability of these structures, such as offshore windmills. The lab also provides hands-on experience to both engineering students and professors.

“This facility takes an engineer of any discipline’s level of learning to a whole different level. This is way beyond professors, way beyond the books, way beyond standard or common laboratories,” Jeffrey Aceto, UMaine’s assistant director for capital planning and project management, said. “This kind of additional research allows students to become interns here, work in this environment, work on experiments, perhaps go to grad school — grad students have a big role here in terms of researching. It’s all an extension of the academics here and the results are far-reaching.”

“Almost all professors have some form of research they do — papers and that sort of thing. To have the physical research facilities here means that professors aren’t going to other universities and doing that work there,” Aceto said. “They have the opportunity to do it here. The more we invest in that, of course, the more desirable it is to be a faculty member at this campus.”

The wind and wave lab was added to the Advanced Structures and Composites Center in 2015 and cost approximately $13 million to construct. That money came by way of grants from the National Science Foundation and the Economic Development Agency.

“Once you have facilities like this [the Advanced Structures and Composites Center] you’re more qualified for these grants,” Aceto said. “You can now further demonstrate that you’re prepared to do this testing.”

The basin in the lab measures 30 meters by 9 meters, holds 365 gallons of water and can produce waves up to 24 inches in amplitude. Complete with 15 pistons on one end of the basin pushing against the water and creating a wave effect and 32 fans on the other end simulating high speed winds, the lab is able to simulate high intensity, hurricane-like conditions.

The university is also committed to sustainability and using Maine-made products and materials whenever possible, and the two most recent additions to Advanced Structures and Composites Center have both been Leadership and Energy and Environmental Design (LEED) certified, a significant milestone of environmental performance and sustainability.

“We just had a faculty member leave to go to another campus. Then he came back almost immediately and said ‘I want to partner with you guys and keep doing testing with you,’” Chris Urquhart, UMaine’s safety and laboratory operations manager, said. “We thought he was leaving to go to better testing facilities but that wasn’t the case, it was just a better opportunity for him and his lifestyle and everything but he still wants to do work with us because of our unique facilities.”

UMaine’s Green Team was highly active throughout last week’s sustainability week, as they tabled in the Union and worked to promote sustainability on campus.

Chantal Bussiere, an ecology and environmental sciences student with a forest ecosystems concentration, and member of the Green Team, says the group affiliates itself with other groups on campus who have similar goals.

“We’re affiliated with the UMaine Greens, who work in the greenhouses and grow the microgreens — the bean sprouts, herbs etc. — for the dining halls,” Bussiere said. “We asked them if they would do tabling for us on Tuesday and they came down here and had some seeds and little egg cartons full of soil so you could plant a seed and grow it in your dorm.”

The rest of the week was dedicated to informing people about the Green Team, giving people nature-themed henna tattoos, and encouraging people to reduce their usage of plastics.

“One of our members is working to organize a movement on campus to use less plastic,” Bussiere said. “We spoke to the bookstore last semester to try to discourage plastic bag use by encouraging their employees not to just automatically offer customers a bag when they may not necessarily need one.”

Outside of sustainability week, the group does a lot of work in the local communities surrounding the UMaine campus.

“We do a lot of work at Hirundo Wildlife Refuge in Old Town,” Bussiere said. “During the fall semester we were helping them build a new family trail, so we were cutting trees that were encroaching on the trail, measuring the trail, etc.”

Even during Maine’s harsh winter conditions, the group does their best to make a difference.

“We went back around winter break because they have an event called Winterfest, which is basically a family event with lots of fun and games, ice skating, sled dogs, etc. So we helped volunteer to run that event,” Bussiere said.

There’s no better time of year, however, to get involved on campus and revel in both the springtime weather and the spirit of sustainability on campus than the remaining weeks of the school year. Bussiere emphasized what a unique time of year it is on campus.

“Earth Day is a great holiday, I think it’s great that we celebrate it and I think it’s even better that we extend it into the whole week prior,” Bussiere said. “I love how during these times we can come together and celebrate. It’s really a perfect time for the holiday.”