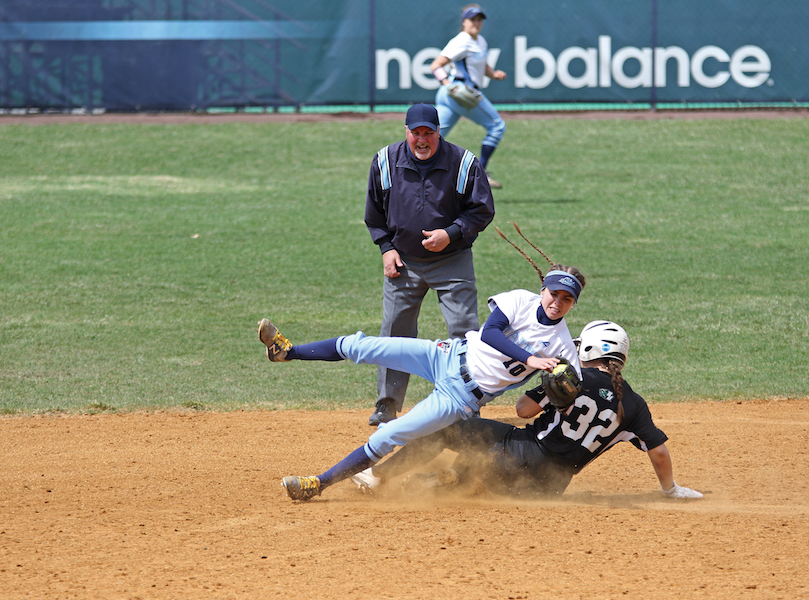 Sarah Coyne is taken out out by a Binghamton baserunner during the Black Bears three game series against the Bearcats. Maine would drop the series with a 3-1 loss on Sunday. Photo by Matthew Lavoie, Maine Campus

The University of Massachusetts Lowell (19-22, 12-2) softball team won the contest against the University of Maine 5-4 on Wednesday, April 25, and their win was well deserved. Despite holding the lead for most of the game, the Black Bears surrendered two home runs in the seventh inning that gave Lowell the victory.
First-year pitcher Kyleigh O’Donnell relieved fourth-year starting pitcher Annie Kennedy in the fifth after Kennedy’s four innings of work that included two strikeouts, seven hits allowed, and just two earned runs. O’Donnell allowed an RBI double in the fifth to tie the game 3-3.
It was third-year third baseman Alyssa Derrick who regained the lead for the Black Bears. The Rhode Island native singled to right field to drive third-year infielder Laurine German home to make the game 4-3.
O’Donnell went into the seventh inning with a 4-3 lead. On the first pitch of the inning, UMass Lowell’s Sydney Barker went deep to left field with a solo shot, effectively tying the game at 4-4. Then UMass engaged the unlikely. Their third baseman Maria Moccio had been 0-3 at the plate that afternoon. She had left five runners on base in the game at that point. Moccio was down in hole facing an 0-2 count before launching a walk-off home run to center field for the 5-4 victory.
UMaine third-year Maddie Decker went 2-3 in the game with a double and a home run of her own. She had two RBIs in the game. Third-year second baseman Meghan Royle went 2-3 from the plate as well. Derrick was 2-4 in the game with one run batted in. German went 1-3 with a double. First-year Amanda Nee went 1-3 at the plate with a run scored. Fourth-year right fielder Erika Leonard went 1-4 with a run scored.

Errors were the name of the game in the first game of three against Binghamton University. The Bearcats beat the Black Bears 4-1 and all five runs in the game were unearned. The Black Bears had the lead early in the contest. In the first inning, fourth-year centerfielder Rachel Carlson made it to second base by a throwing error by the pitcher. Derrick drove Carlson home with an RBI single. Unfortunately, Derrick’s hit in the first inning would be the Black Bear’s only hit in the game.
Binghamton’s second-year pitcher Rozlyn Price was dazzling in her outing. After allowing an RBI single, Price retired six consecutive UMaine batters. In her six innings of one-hit softball, Price walked four UMaine batters and struck out four. Binghamton’s first-year Chelsea Howard relieved Price and picked up the save. Howard struck out three of the four batters she faced.
Kennedy pitched a gem of her own. Kennedy pitched a complete game and allowed six hits in the game. The four runs she allowed were all unearned. Kennedy struck out six batters in her seven innings of work. Her record this season is now 9-5.

The Black Bears had a 4-2 lead going into the seventh inning. O’Donnell had pitched six strong innings, only having allowed two runs. She then loaded the bases and allowed a run. After walking a batter to load the bases once again, she was relieved by fourth-year Molly Flowers. O’Donnell had three strikeouts in the game. Flowers inherited three of O’Donnell’s base runners.
Flowers allowed a run on a wild pitch that tied the game 4-4. Then Binghamton’s fourth-year infielder Kate Richard singled up the middle, scoring two runs to take a 6-4 lead. Binghamton’s first-year infielder Makayla Alvarez hit a sacrifice fly to make it 7-4. Second-year infielder Kassidy Seary then hit an RBI single to take a 8-4 lead. The Black Bears pitching allowed six runs on four hits in the inning.
Down by 4 in the bottom of the seventh, the Black Bears just went for it. Maine’s first-year Shanna Scribner walked. Leonard laid down a bunt single that allowed Scribner to advance to third. With runners on first and third and no outs, German hit a double to right center, scoring Scribner and Leonard. Now down 8-6, Carlson put down a sacrifice bunt, allowing German to make it to third base. Derrick trimmed the lead down to one after scoring German on a groundout to Binghamton’s shortstop.
With two outs in the bottom of the seventh, Decker doubled to left center. First-year Hailey Perry pinch ran for Decker. Fourth-year first baseman Kristen Niland reached on an error by Binghamton’s first baseman and Perry advanced to third. Royle walked to load up the bases for the Black Bears. Nee pinch hit for second baseman Sarah Coyne as first-year Maddie Kimble pinch ran for Niland. Nee then managed to reach first on another error by Binghamton’s first baseman as Kimble and Perry made it home to score the tying and then winning run. Maine won the game 9-8 and Flowers picked up her third win of the season.

It was another exceptional start for Kennedy, who struck out  five Binghamton batters in Sunday’s game. Entering her Senior Day game, Kennedy had a 9-5 record and an ERA of 1.27. After throwing more than 100 pitches in her complete game loss the day before, she would repeat the feat in Game 3.

Kennedy didn’t let the Bearcats score until the sixth inning. She was rolling through the lineup. Kennedy’s accuracy from the mound was notable as well considering she managed to walk no batters in the game. After Binghamton tied the Black Bears 1-1 in the sixth inning, Kennedy held them in check for the seventh.

The Black Bears sent her out for the eighth inning, which is nothing new for Kennedy. This was the fourth time she’s pitched the eighth inning of the game, and it would be her sixth complete game of the season. It was Rozlyn Price, the pitcher who limited the Black Bears to one hit in the game yesterday, who drove home the go-ahead runs. She launched a ball to left field, scoring two runners to give Binghamton the 3-1 lead. Howard, who recorded the save in the one-hitter, collected the win for Binghamton. After striking out the side the day before she managed to throw 5.2 innings of scoreless softball. She allowed just four hits and struck out six UMaine batters, finishing the game that Price started. Price pitched 2.1 innings of one-hit softball, and walked three batters.

Senior Day was the last of the home games for the Black Bears. A three-game series at the University of Stony Brook will conclude the regular season. Game 1 of the doubleheader begins Friday, May 4 at 1 p.m. Game 2 will start at 3:30 p.m. Game 3 will be played on Saturday, May 5 at 11 a.m.

Baseball swept in Saturday doubleheader
Gardner shares insights on work with Hunter, while reflecting on her leadership