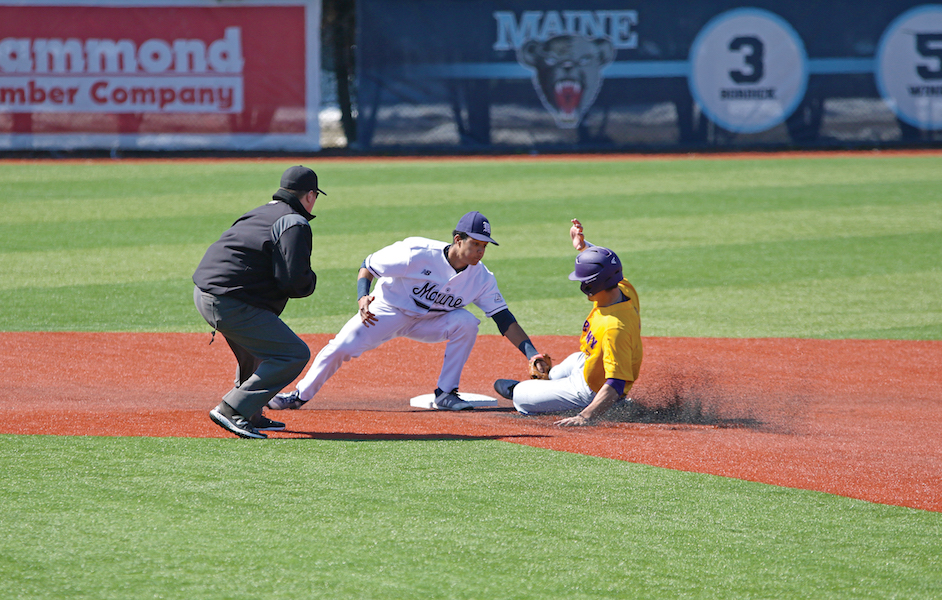 Jeremy Pena puts the a tag on an Albany baserunner. Photo by Matthew Lavoie, Maine Campus

In the top of the fourth, first-year Ryan Hernandez hit a home run to make the score 5-2. In the bottom of the fourth, second-year Hernen Sardinas hit a single, which ended up scoring third-years Jeremy Pena and Danny Casals to increase the lead to five.

In the bottom of the fifth, Albany brought in first-year Ben Brown to replace Smith on the mound. Maine also switched their pitcher and brought in fourth-year Connor Johnson.

In the bottom of the sixth, Pasic scored to make it 8-2. Pena then scored on a hit by fourth-year Brandon Vicens.

In the top of the seventh, redshirt first-year Matt Geoffrion replaced Johnson on the mound. Albany then made their final pitching change in the eighth inning, putting redshirt second-year Nick Bird into replace Brown. The game would finish with the Black Bears on top 10-2 after Doody plated Vicens with a single.

“I thought it was a really good game overall. We played like the team we knew we had all along and now it’s about building on that and getting better everyday,” Winn said.

The University of Maine baseball team returned to the mound for the second game of their doubleheader against the University at Albany Great Danes (9-10) on Saturday, March 31. The Black Bears took game two with a score of 4-1.

In the top of the first, Vicens put Maine on the board first when he scored two on a single. Then, in the bottom of the fourth, Vicens scored again off of a Doody single, making it 3-0.

With one inning remaining, the Black Bears made a couple pitching changes. Second-year right hander Cody Laweryson came in for Arel, and then they switched to Johnson to get the needed final out. With runners on second and third, Johnson came in clutch, getting the needed out. That would do it for game two, as the Black Bears went onto win it 4-1.

“It’s really good to see everything coming together and for everyone to start moving in the right direction. Anytime you can win both games of a double header, especially at home, and have a chance to sweep the series, it’s all a huge positive,” Johnson said.

The University of Maine baseball team finished their three-game series against the University at Albany on Sunday, April 1 . The Black Bears swept the series, winning the last game 17-1.

Starting on the mound for the Black Bears was third-year Nick Silva, who started 11 games last season and was second on the team with 62 strikeouts. The starting pitcher for the Great Danes was redshirt first-year John Clayton, who made four appearances last season.

The Black Bears started the scoring in the bottom of the first when Pena scored off of a double by Casals. Then, Sardinas hit a double which scored Casals and Bec to make it 3-0. The scoring continued when Sardinas got a run of his own to increase the lead to four.

In the top of the seventh, Casals hit a double to score Pena. The Black Bears then made a pitching change, bringing in third-year Eddie Emerson to replace Silva. The scoring would continue as Bec hit his second homer of the game to make the final score of the afternoon 17-1.

With an inning remaining, Maine made their last pitching change of the day, bringing Laweryson in to replace Emerson.

“It was very nice to play at home and get a conference sweep. We did an amazing job the whole weekend pitching, hitting and playing great defense,” Silva said, who also got the win.

The Black Bears return to Mahaney Diamond Saturday, April 7 and Sunday, April 8 when they host a three-game series against Stony Brook University. The Great Danes return to the field Tuesday, April 3 when they travel to Marist College. The game is set to start at 3 p.m.

Edited on April 4 to redact line on Coach Derba not being available for comment.

Remembering Daniel Scott as a ‘bright light’ and member of Best Buddies
The consequences of the U.S. and China trade tariffs