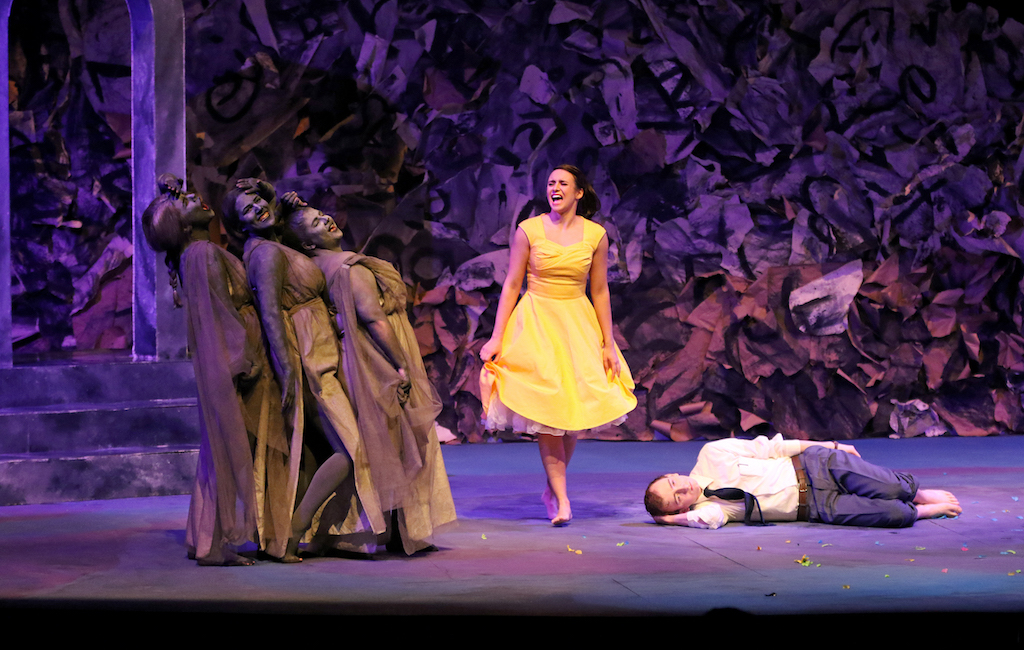 Maine Masque presented a play "Eurydice" in the Hauck Auditorium from April 11 through April 15. Photo by Matthew Lavoie, Staff.

As performers put on their costumes and finished last minute touch-ups, Director Nathan Reeves, a fourth-year student, took one last look out at the empty seats before the doors opened and the audience arrived.

With only five weeks to rehearse, and three weeks to practice on the stage, Reeves brought together seven cast members for Maine Masque’s performance of “Eurydice,” a tragic and equally comedic play based off Greek mythological stories. The show ran from Thursday, April 13 at 7:30 p.m. to the final matinee at 2 p.m. on Sunday, April 15 at the Hauck Auditorium. Admission was $10 or free for students with their MaineCards.

Eurydice is a female character in Greek mythology who is known for being the daughter of Apollo, and for marrying her husband Orpheus, who possesses a gift for music. This ancient Greek myth was revived into a modern-day love story in the Maine Masque adaptation of the play. Maine Masque is a student-led theater group at the University of Maine, known for their plays and productions featuring college students. Founded in 1907, it was originally known as the UMaine Dramatic Club before becoming Maine Masque.

“This great rendition of a Greek tragedy [that] took a lot of rehearsing and planning,” Reeves said. “The rehearsal process has been quite a journey. Reading this play for the first time over a year ago, it’s exciting to see that we have come all this way. It has been so rewarding to have the chance to direct this production and work with people [whom] I trust and love. This has been a once in a lifetime opportunity, and I couldn’t be happier with how it’s turned out.”

This was Reeves’ first directorial debut as a part of the university’s annual student-run production. Cast and crew of Eurydice are all students at UMaine, including the stage managers, make-up artists, costume designers and set creators. The show included one hour and eight minutes of drama, love, laughter and special effects.

“Theater is so important. It is such a great learning experience to just come and enjoy a show, and see how everything is set up and comes together live on stage,” third-year student Liz Piotrowski said. “I loved the show, and for such a short production it held my attention at every moment and was one of the best I have seen at the school.” Piotrowski enjoyed the show so much that she attended it two nights in a row.

Each cast member stood out on stage and played large roles within a small and intimate group setting.

“We are definitely a family. With this show in particular, we were able to try new things and explore with what we can do, especially with our characters,” second-year student Rose Michelson said. “Overall it was an amazing experience, and it was awesome to get to watch everything come together.”

The unique and simplistic setting of the show included a textured backdrop cluttered with pieces of paper. These papers represented letters that Eurydice and Orpheus, as well as Eurydice’s father, wrote in the story, during the course of the hour long performance. The majority of the play took place onstage in the “underworld,” and also off-stage in the modern, “real” world, identified by a backdrop and a well. The use of confetti, a raining elevator, stilts and stone-like characters painted in grey made the show stand out.

“We love to keep the audience engaged in a spectacle that they weren’t prepared for,” third-year student Mackenzie Peacock said. “Our characters in this small cast bring energy and craziness to the stage in such a unique way.”

The cast spent hours before showtime prepping the stage, trying on costumes and getting their hair and makeup done. Makeup artist Noah Lovejoy did the makeup of main characters Eurydice and Orpheus, and covered three cast members in powder and paint as a part of their roles as “stones.”

“The program here is very welcoming, and is such a friendly environment,” Peacock said. “It was intimidating at first, but it’s so fun to meet new people and become close with the other cast members and make new memories. We even covered ourselves in paint. As a stone character in the play, we do crazy things like paint ourselves grey, and it really just adds to the magic of theater.”