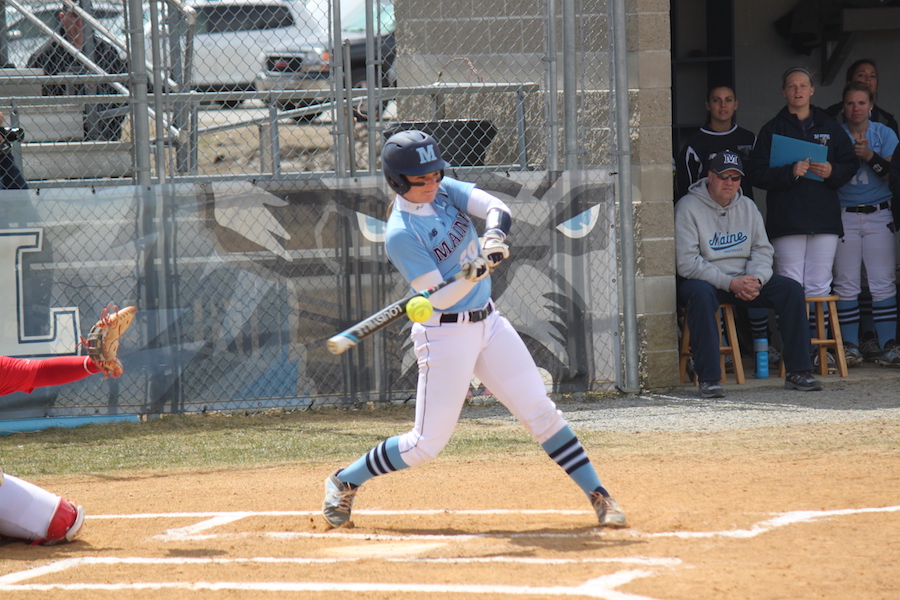 The UMaine softball team downed the University of Hartford over the weekend. File photo

Maine (12-14) began America East play strong, winning all three games against the Hartford Hawks (6-14) on Saturday and Sunday. Maine earned victories of  5-2 and 2-0 in Saturday’s doubleheader, before completing the sweep of the Hawks with a 6-2 win on Sunday afternoon. Maine has now won 14 straight games against Hartford.

In game one, it was fourth-year pitcher Annie Kennedy getting the job done. The Sound Beach, New York native hurled a shutout through six innings, before allowing two runs to the Hawks in the last half of the seventh. Kennedy finished with five strikeouts on the day.

Fourth-years Sarah Coyne and Erika Leonard chipped in with three hits each in the game. A Coyne single with two outs in the sixth eventually allowed Maine to plate three more runs and take a commanding 5-0 lead.

Second-year third baseman Amber Mianti ended the Black Bears bid for a shutout with a two-run homerun in the bottom of the seventh off Kennedy. Mianti’s blast scored fourth-year first baseman Alex Saharek. Fourth-year pitcher Molly Flowers would come on in relief to get the final two outs for Maine.

In game two, the Black Bears were backed by a tremendous outing from second-year pitcher Kyleigh O’Donnell. O’Donnell went six innings, giving up two hits while punching out six. The team then turned to Flowers looking for more of what they saw in game one. Flowers pitched the final two frames, surrendering a pair of hits, while fanning two batters.

Runs proved to be hard to come by for both teams, with the game remaining scoreless into the eighth.

In game three, Maine got on things going early. Leonard lead off with a single and quickly moved to second on a throwing error by the Hawks. German pushed Leonard to third on a sacrifice bunt and Carlson followed with an infield single to short, scoring Leonard to get Maine on the board. Carlson then took second and third on pass balls before scoring on a sacrifice fly from Decker to gave Maine a 2-0 lead.

On the day, Carlson was able to record her ninth multi-hit game of the season.

In the top of the fifth, the Black Bears began to open things up. First-year Shanna Scribner singled to start off the inning and moved to third on a double by Leonard. Scribner then scored on a fielder’s choice hit by German and Leonard quickly followed on a throwing error by the Hartford catcher. German then came home on a triple by Carlson, who scored next on a sacrifice fly by Decker. Maine took a 6-0 lead going into the bottom half of the fifth. The Hawks cut the deficit to 6-2, but were unable to do further damage.

Kennedy earned her second win on the series and sixth overall, turning in another strong performance on the hill. Kennedy surrendered only one earned run on hits while fanning four and walking none. Kennedy has now pitched 31 straight innings without allowing a walk. Flowers came in and tossed two and a third scoreless innings while striking out one batter.

The Hawks return to the diamond on Wed. April 4 with a matchup against Siena College. Maine will travel to Albany for another America East series, with the first pitch of game set for 1 p.m. Saturday.