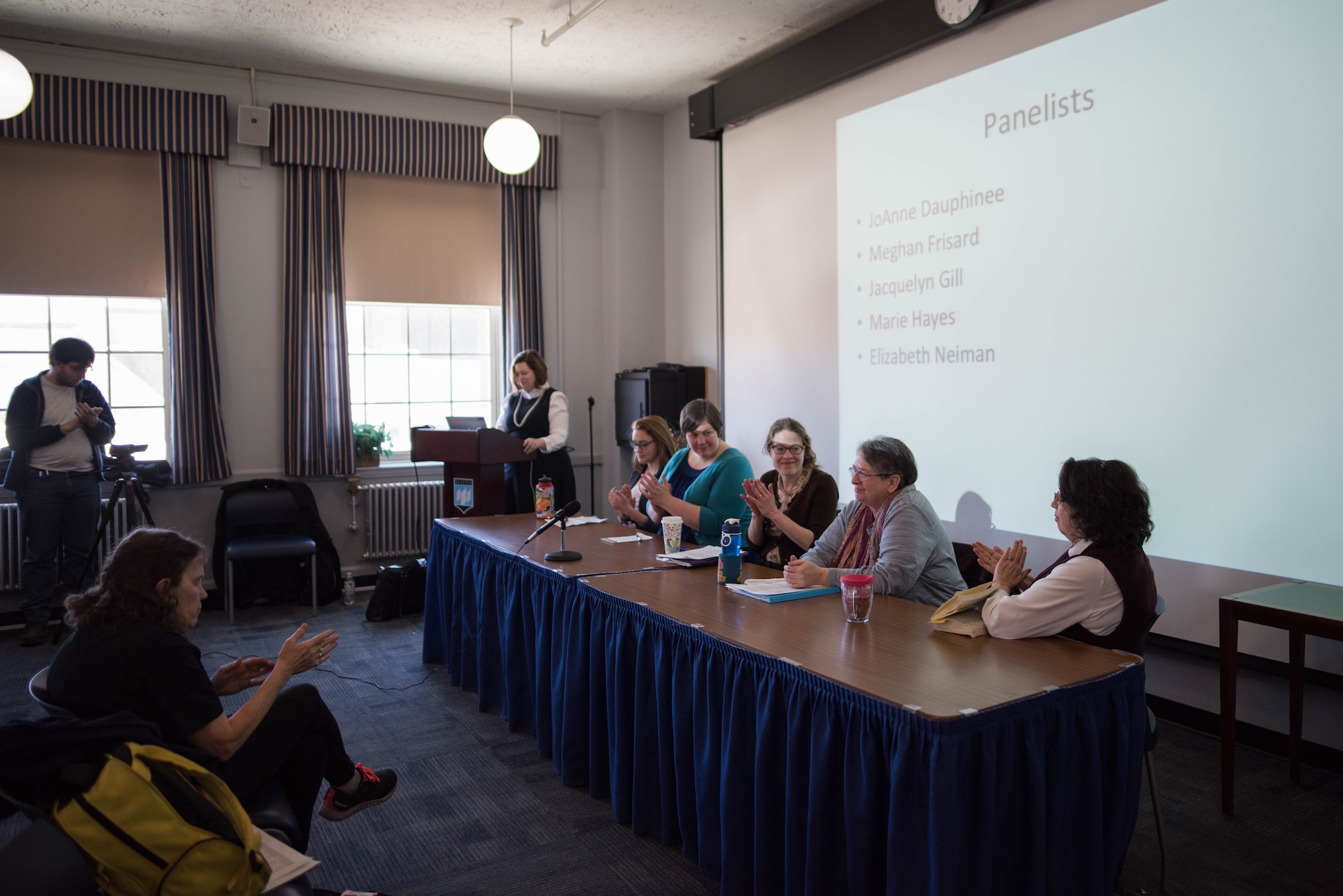 Feminism: Who Needs it? a panel on March 27th discusses different facets of being a feminist. Photo by Maggie Gautrau, Photo Editor

As part of Women’s History Month 2018, the University of Maine’s Rising Tide Center and Women’s, Gender, and Sexuality Studies (WGS) Program hosted the pop-up panel “Feminism: Who Needs It?” in the Bangor Room on Tuesday, March 27 from noon to 1 p.m.

“This is probably our fourth or fifth one of these… ‘pop-up panels’ around different topics of relevance,” WGS Director Susan Gardner said before introducing the panel of five local feminist activists, brought together to discuss how feminism has served their lives, and what feminism means to them. “Maybe it’s something societally that’s happened, something on campus that’s being discussed.”

“I just feel personally that feminism is a movement for anyone of any gender to live whatever life they want without any sort of gendered expectations,” Feminist Collective Co-Chair Meghan Frisard began. “Feminism really helped me find a voice, and it became really central to my identity. Being able to practice intersectionality has given me the language to see the different levels of oppression that exist in our society… and how they’re reinforced by different biases that people are often not aware that we have. And learning about intersectional feminism really helped me recognize those biases in myself.”

Dr. Jacquelyn Gill, Assistant Professor in the School of Biology and Ecology and the Climate Change Institute, grew up as part of a bridge generation during both second and third wave feminism movements. “It was this long process of me first thinking that being a feminist meant being like a boy… letting go of any femme identities I may have had… and then somewhere in my late twenties, early thirties, really coming into my own feminist identity, at the same time that I started accepting my own femme identity, and being able to embrace the feminine as not something that’s not powerful.”

“It’s one thing to acknowledge privilege, it’s another thing to give some of it up,” Dr. Elizabeth Neiman, Assistant Professor of English and Women’s, Gender, and Sexuality Studies, who brought discussions from her class into her definition, said. “I think there’s a lot of misunderstanding out there about what ‘feminist’ means. My students have confirmed that the word ‘feminist’ is often used as a dirty word or insult. For many people that they know, a feminist is someone who wants women to have more power than men. Perhaps this is changing, though, with the #MeToo movement … I would define feminism as a continuous and sustained effort to look inwards, and to be mindful of the ways in which sexism, including heterosexism, infiltrates one’s thoughts and ways of being. Women can be as misogynist as men… and even the most progressively-minded women can feel and behave in ways that counter their own politics.”

“There’s an old feminist joke that, asking ‘what is feminism?’ is like asking someone to describe the universe and give two examples,” feminist community activist and organizer JoAnne Dauphinee recalled. “Ideas of equality are necessary, but they are not sufficient. Feminism is not just an ‘add woman and stir’ recipe, although that’s hard enough. But we don’t want a bigger piece of the pie, we want a whole different pie. And the new pie would dismantle, or fix, systems that perpetuate oppression, like patriarchy, male supremacy, looksism, classism, rape culture, sexual and gender oppression, ableism, white supremacy, ageism and more. And they are all interconnected, they all intersect.” Dauphinee is set to be recognized the day after the panel as a recipient of the 2018 Maryann Hartman Awards.

Before the floor was opened for questions, Dr. Marie Hayes, a professor of psychology, brought the panel statements to a close with a simple request: “I ask you, implore you to support this program. I’m a phased-retirement faculty member, so I won’t get to see it. But I will say that there has been tremendous progress on campus.”