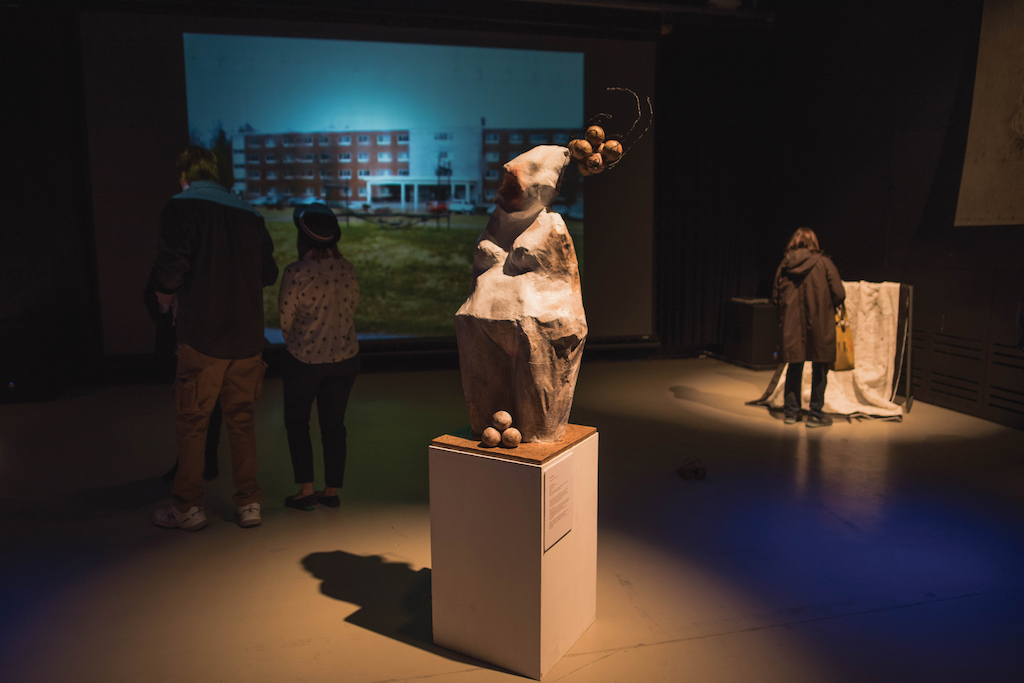 On Monday, April 16, the University of Maine’s Innovative Media Research and Commercialization Center (IMRC) hosted an opening reception for “#SafetyWork.” This exhibition features 12 artists’ work, and highlights their perspectives on navigating the world as women.

Curated by UMaine faculty member Susan Smith, the exhibition desires to give a voice to women who have experienced assault, domestic violence and discrimination.

Smith’s piece has been on display in Stewart Commons since January. It originally began as an antique bed topped with a mattress made of ice and a handmade quilt. The quilt features over 100 testimonials of women interviewed by Smith. While these women inspired her piece, their stories along with the banners that hung on College Avenue apartments during Welcome Weekend, displaying messages such as “Honk If She’s 18” and “Daughter Drop Off,” inspired Smith to curate the exhibition.

“There is power behind these stories local stories, and campus stories. A bond can be developed through sharing them that can lead to change,” Smith said.

During the opening reception, audience members were given slips of paper which, when read aloud, shared pieces of these women’s testimonials. The gallery was silent as, one by one, participants read their slip to the group. This experience brought the words of afflicted women into the mouths of the individual, allowing the audience to experience the stories in an uncommon way.

When spring arrived the ice mattress melted. Under her bed frame sculpture Smith has planted 100 black tulips which will bloom in honor of the 100 women and stories that inspired the exhibition.

Eleanor Kipping, a third-year graduate student in UMaine’s intermedia program, is one of the artists featured in the exhibition. Most recently, Kipping’s work has been seen across campus in her multi-site installation titled “Brown Paper Bag Test,” which displayed portraits of women of color in observation of Black History Month. In #SafetyWork, her pieces included a brown paper banner covered in words and phrases, as well as a live performance piece.

“My work explores the Black female experience as Other in the United States in consideration of colorism, racial passing and hair politics,” Kipping said. “I do this through performance, installation and social practice.”

With these issues in mind, Kipping discussed what women do, consciously and subconsciously, to protect themselves against assault, harassment and abuse of local women of color. While this group of women collectively created the featured banner, she used their responses to create the script for a live performance piece.

Two men stood like statues on different sides of the exhibit. They read parts of Kipping’s script, in a spoken word style performance, while wearing nothing but beige tights and high heels. With a final and haunting warning to “make sure you can run in your heels,” the piece conducted a reflection on the fear faced in womanhood. The piece was performed at the opening reception by third-year engineering student Reed Gordon and intermedia graduate student Steve Norton. Collectively, these works are titled “#safteywork manual.”

“I wanted men to say these words because I knew that the gender disruption would be recognized,” Kipping said. “Males interrupted the opportunity for women to be written off and ignored. I’m playing with the notion that white male bodies have power. At the same time they were made vulnerable because they were nude and on display.”

Other works in the exhibition included a personal reflection on rape and the systems in place to convict rapists in Aylah Ireland’s “Rape-Kit Swag Bag.” Anna Soule addressed Asian objectification by dressing a mannequin in a sexualized school uniform, and attaching pins that displayed words such as “Submissive” and “Yielding” in her piece “Asian Objectification #3: Fantasy Girl.” Amy Pierce used a child’s play-pen to discuss the importance of teaching children ownership of their own bodies and protecting them from abuse in her piece “My Body, My Boundaries.”

Collectively, these pieces gave the audience insight into the difficult trials of many underrepresented women. The artists were aware that some audience members may be sensitive to these topics. With this in mind the exhibition worked closely with both Partners for Peace and Rape Response Services. Representatives from both organizations were present at the opening reception to provide insight or advice to audience members.

“As for my own work, I hope audience leave feeling a bit uncomfortable and thinking about their own roles in some of the issues regardless of their race, gender, age, experiences, etc.,” Kipping said. “As for the show as a whole, I hope those that are familiar with some of the issues feel a bit more recognized in their experiences and realize that they’re not alone. As for others, I hope that it’s another example of how much work needs to be done in improving society and how significant everyone’s role is.”

The IMRC welcomed students, faculty and community members to visit the exhibit for free during its week-long run from Monday, April 16, through Friday, April 20. Some pieces from the show, such as Kipping’s spoken word performance, can be found online on the artist’s website. Visit Stewart Commons this spring to see Smith’s 100 tulips in bloom as part of her sculpture.