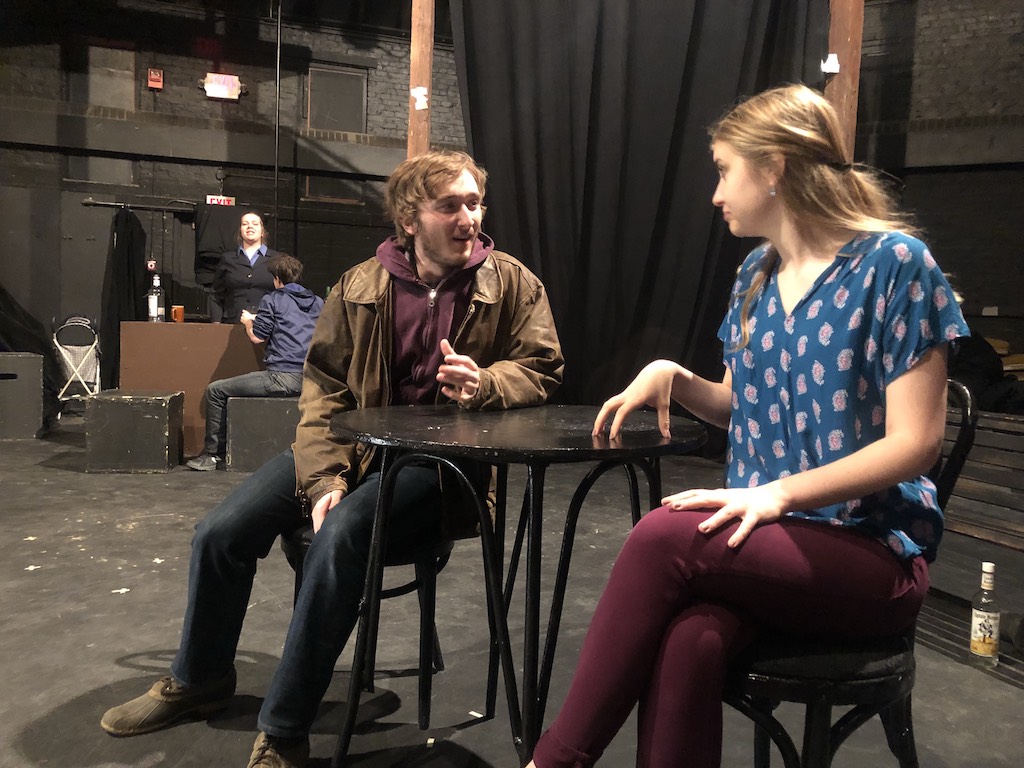 On April 20 at 7:30 p.m., a student-written and directed one-act play entitled “Prosthetic Gods” will premiere at the Al Cyrus Pavilion. The play is the culmination of fourth-year student Taylor Cronin’s Honors Thesis.

The play follows James Creen, played by first-year student Peter Natali, whose choices have put him in a horrible position. Keeping one hand on the bottle, Creen is forced to reflect on what led him to lose his family, job and faith with the guidance of a higher power, played by third-year Emilia Byrne.

“I wanted to do something I was passionate about. Before this, I have primarily been an actor. It was weird being on the other side of the audition table,” Cronin said.

The play began as a project in one of Cronin’s honors courses during her sophomore year. Over the years, she has worked so diligently to develop it into the final product that will premiere this weekend, all of which has been student produced.

“It’s been a long process and has definitely been a learning experience. It has taken a lot of collaborative work with the cast, they have all shared their ideas with me and we have worked together to create the show,” Cronin said.

In addition to the help and guidance of her company, Cronin attributes much of her success in the project to her honors thesis committee, which consists of a thesis advisor as well as five committee members that are UMaine faculty.

“My committee has opened so many doors for me,” Cronin said. “MJ Sedlock, who is the Production Manager, helped me reserve the Pavilion and contributed in so many ways. The theater departments wants to see their students succeed.”

Katie Dube, a second-year secondary education student with a minor in theater, plays the role of the protagonist’s wife, Susan Creen. Dube has performed in many UMaine productions such as “Big Love,” “The Pajama Game” and “Almost, Maine.” However, Cronin’s production has given her a slightly more hands-on experience.

“She wrote the show and is directing it, that has created such a different environment than what I am typically used to working in when the directors have a level of detachment,” Dube said. “The process has been very fluid, she frequently listens to and uses our ideas.”

While the show does contain mature and violent themes, they are used to convey the playwright’s message with sensitivity and diligence from the actors. Their collective work has made the production both poignant and edifying.

“Prosthetic Gods is a story about understanding your choices and what consequences might come from them,” Cronin said. “A lot of the ideas reflect my own thoughts and opinions. We have to understand that our choices make an impact and that human agency is so important. I hope that even one person will walk away from the show and look at their life. I hope they will see if their choices are leading down the right path.”

Join Cronin and her cast for the opening weekend of “Prosthetic Gods” in the Al Cyrus Pavilion Theater on Friday, April 20 and Saturday, April 21 at 7:30 p.m. and Sunday, April 22 at 2 p.m. Admission is free, and there will be a talkback with playwright and cast after every performance.