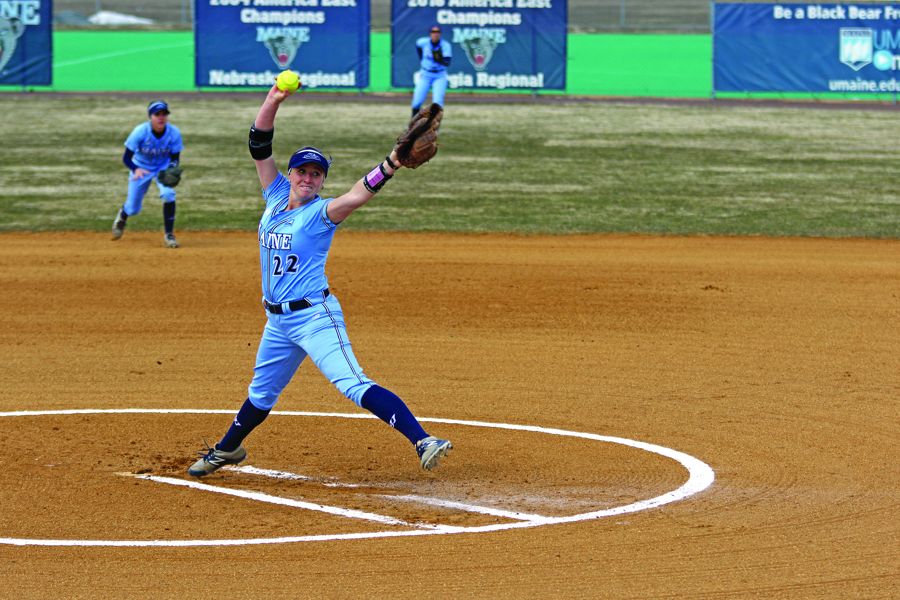 Annie Kennedy goes into the windup as Maine takes three out of their last four conference games. Matthew Lavoie, the Maine Campus

The University of Maine softball team (16-16) hosted their home opener against the University of Massachusetts-Lowell (11-19) on Wednesday, April 11. Unfortunately, the Black Bears fell to the River Hawks 1-0 in extra innings in game one of the doubleheader. UMass is currently sitting in first in America East Conference play, while the Black Bears are sitting in second.

It remained scoreless for the majority of the game, however, in the top of the fifth inning, third-year Sydney Barker hit a double. The Black Bear defense stood strong to keep the score tied 0-0.

In the top of the sixth inning, the River Hawks loaded the bases, but third-year Alyssa Derrick made an easy play to fourth-year first baseman Kristen Niland for the final out to keep the game scoreless.

The game was forced to go to extra innings, which resulted in a double by Barker, who then came around to score the game-winning run to end the game 1-0. Capria finished the game with six strikeouts in the one-hitter.

Starting in the circle for the Black Bears was first-year Kyleigh O’Donnell, who struck out a career-high 12 hitters in game 2 of the double header, giving her the win.

Starting in the circle for the River Hawks was third-year Kaysee Talcik, who has started 37 of 48 games pitched in her career thus far.

It took all the way until the bottom of the sixth inning for the scoring to begin, with third-year Maddie Decker hitting a line-drive sacrifice to right field to score second-year Emily Gilmore.

The scoring continued for the Black Bears when fourth-year Erika Leonard reached third on a fielder’s choice, resulting in fourth year Rachel Carlson scoring to give Maine the 2-0 lead.

Maine kept the momentum coming in the bottom of the sixth inning when Derrick played out a nice bunt down the first base line to score third-year Laurine German to increase the lead to three. That would do it as the Black Bears went on to win 3-0.

“Today was a good day as a team to gauge what we need to work on and what we are doing well. Our pitchers did phenomenal. We had strong defence and our hitting will come around. I think we did a great job competing and staying in both games. It was a tough loss in the first game but a great way to come back and string some hits together in the second game. It was an all around team effort today,” fourth-year second baseman Sarah Coyne said.

“Our first game seemed to be a little unusual for us having one or two hits but I think we used that and did a great job making things happen the best we could late in the second game. Manufacturing runs was crucial for our success in that second game,” Carlson said.

University of Maine Head Coach Mike Coutts also had some things to say after the game, pleased with his team’s effort.

“It was good to get the split especially after losing the first game. I thought Annie [Kennedy] and Kyleigh [O”Donnell] pitched fantastic and we played really good defense today. We managed to push across three runs in the sixth by executing small ball, which is what you need to do when you struggle getting hits,” Coutts said.

In the bottom of the fourth inning, Niland hit a deep double to give the Black Bears a runner on third with one out, however, nothing would come of it. Carlson then hit a triple into left field, setting up German.

German then made an infield hit to score Carlson to make it 1-0 in the bottom of the fifth inning. Derrick doubled to right center, scoring German and Leonard, making it 3-0.

In the top of the seventh Maine made a pitching change, putting fourth-year Molly Flowers in for Kennedy. The Black Bears would go on to win game one 3-0.

“Our hitting was really good and it was nice to have our bats swinging and getting the result we needed and deserved,” Flowers said.

The University Maine softball team played their second game of a three-game series against UMBC on Saturday, April 14. The Black Bears came out on top again, defeating the Retrievers 5-3.

The Retrievers got on the board in the top of the fourth when fourth-year Tori Alexander scored off an error, making it 2-1.

In the top of the fifth, Kennedy came into the game to replace O’Donnell with two outs remaining in the inning. The Retrievers tied it at two when third-year Shayna Rider scored off of a hit singled to right field by fourth-year Haley DeLaney.

The Retrievers made it 5-3 when second-year Maddie Daigneau scored in top of seventh. That would be the last of the scoring as the Black Bears went onto win it 5-3.

“It was good to have everyone’s bats come alive today. We held it down solidly all around, all of our pitchers did a great job as always,” German said.

The game scheduled for Sunday, April 15 was canceled due to weather.