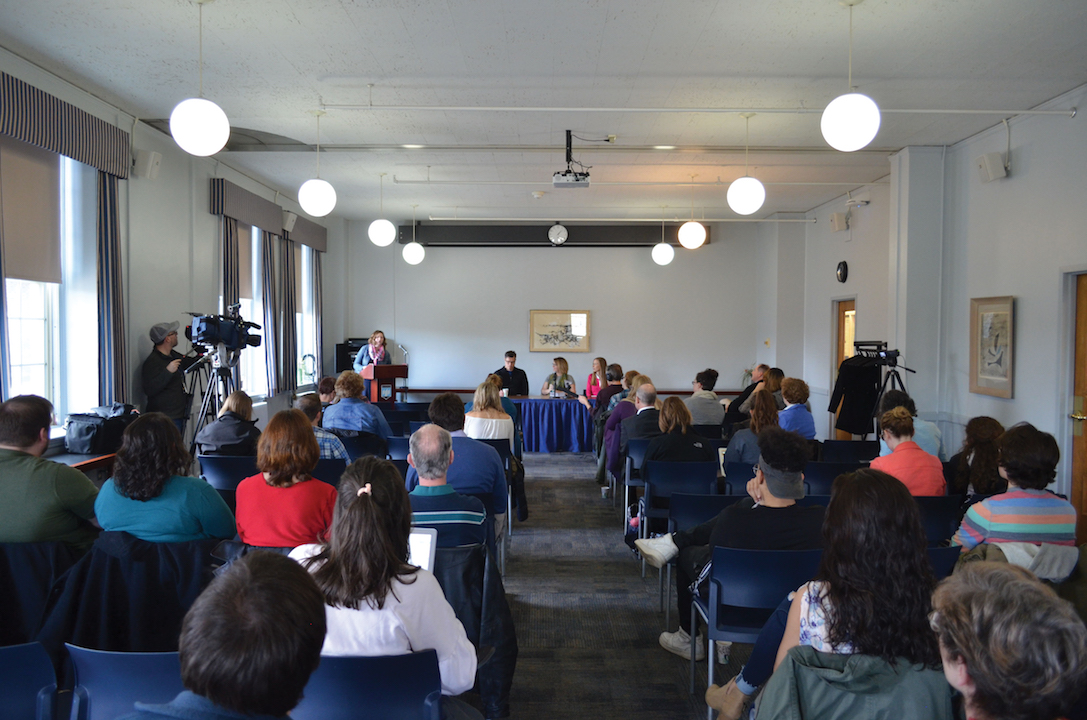 Three panelists sat in the Bangor Room of the Memorial Union on Thursday, April 12 to discuss the #MeToo movement in relation to the media. The decorated panel consisted of Brett Anderson of the New Orleans Times-Picayune, Amy Blackstone, a University of Maine professor in the Department of Sociology, and Judith Rosenbaum, a UMaine assistant professor in the Department of Communications and Journalism (CMJ Department).

The panel discussion centered on how sexual assault has been catapulted into the media through the #MeToo movement and the complications that accompany it. Dr. Michael Socolow, an associate professor in the CMJ Department, organized the event as part of this year’s Alan Miller Fund Visiting Journalist program.

The event started with Socolow’s introduction of Anderson. Moderator Susan Gardner, who is the director of the Women’s, Gender and Sexuality Studies program and the Rising Tide Center, introduced the remaining panel members and allowed each panelist to give an initial response about the topic. For the remainder of the event they took turns answering questions from the audience on various topics centered around the #MeToo movement.

Gardner addressed the accompanying issues of race and sexual assault, noting that the woman who started the #MeToo movement, Tarana Burke, is African-American, but the movement didn’t gain national recognition until October 2017 when white actress Alyssa Milano tweeted the hashtag. Gardner offered statistics on the rate of women by race who report sexual assault. She stated 33 percent of multiracial women, 27 percent of Native American women, 22 percent of African American women and 19 percent of Caucasian women reported sexual abuse.

Anderson talked about how the long heritage of masculinity in the restaurant industry perpetuates harassment. “Young chefs were expected to withstand [harassment] for years before they could become a real chef, and what that did, is it bred generations … of abusers. Kitchens are canvases for toxic masculinity,” he said during the panel discussion.

Nicholas Hong is a journalism student at UMaine who attended the event. He works as a waiter in the restaurant industry and has experienced sexual harassment from customers by being catcalled and propositioned. “I wouldn’t say I didn’t learn anything I didn’t already know, but it extended upon what I already knew,” he said about the event.

Blackstone discussed the lack of preventative training for sexual harassment in our society as a factor that perpetuates workplace harassment. “…We need to do a better job of training employees not just how not to harass each other but also how to serve as advocates and allies to each other,” she said.

Toward the end of the discussion Anderson called upon leaders to hold abusers accountable for their actions. “We can’t move forward thinking this is journalism’s job to fix … journalists and journalism organizations, we don’t administer justice … we expose injustice,” he said.

Many local media outlets came to cover the event, including a news crew from WABI, a news station based in Bangor. The event was attended by UMaine faculty and students. Kelly Erickson, a journalism student at UMaine, said he enjoyed the “opportunity to break down more factors of the situation [regarding sexual assault in the media].”

“The #MeToo movement is transforming journalism and the media as well, and to adequately prepare our students for their careers in future workplaces, we should be discussing this very important topic regularly and educating not just our students, but the community as well,” Socolow wrote in an email.

The event was sponsored by the UMaine’s Department of Communication and Journalism. The Alan Miller Visiting Journalist Fund is funded by a gift from Ann Lucey, a senior vice president for regulatory policy at the CBS Corporation in Washington, D.C., and a UMaine alumna, according to Socolow.

If you or someone you know needs to report a sexual assault at the University of Maine, the Office of Sexual Assault and Violence Prevention can be reached at 207-581-1406. If you would like to speak with someone confidentially the Rape Response Service can be reached 24 hours a day at 800-310-0000.