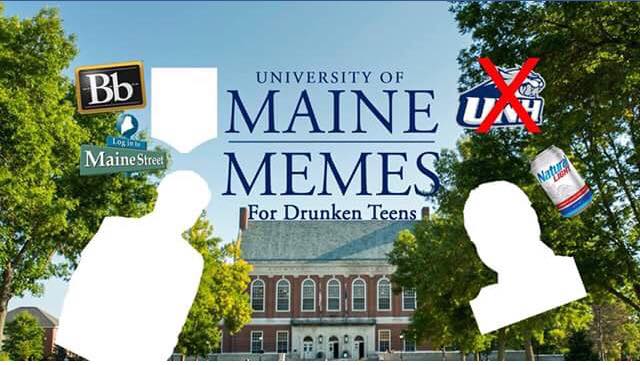 In one corner of the internet, labeled as a “Study Group,” the UMaine Memes for Drunken Teens Facebook group discusses campus culture in an alternative way, through student-generated memes.

This week, the group’s two admins sat down for the first time to talk about their experiences while running the page, the trend of collegiate meme groups and the power of memes in modern culture.

Takquan Parks, now a third-year student double majoring in molecular and cellular biology and biochemistry, decided to start the page during his second year at the University of Maine. After being introduced to the trend of meme pages by a friend at Yale University Parks felt it was something he could contribute to campus culture.

“To see the way these people were interacting with each other over the internet just seemed so bizarre,” Parks said. “I started the page sort of as a joke. I wanted it to be a joke on itself. I think it’s interesting to present the ironies and the weird in’s and out’s of campus while also presenting information that is super relevant. It sort of brings us together as a community.”

Since its creation eight months ago, on Jan. 24, 2018, the page has reached almost 2,000 members. After receiving an unexpected number of submissions in only a few days, Parks realized monitoring the page’s content would be easier with another admin, so he reached out to Lyric Deagle a meme connoisseur and fourth-year student studying civil engineering, who readily accepted the role.

“I was in middle school when I started visiting meme sites. Eventually, I realized that my friends and I liked the same stuff. It was something that we could connect with online, could connect with in person, but could also make jokes about in real life. It’s a big part of growing up with the internet,” Deagle said.

In an article for the Washington Post, Elizabeth Bruenig wrote that “For millennials, memes form the backdrop of life.” While this may seem true when looking at the page, Parks has a slightly different perspective.

“Memes subjectively are prominent not because of the generation that we exist in or the ideologies associated with this generation, but rather because of the communication system that is available at the time,” Parks said. “For example, in a newspaper, there is often a cartoon section where, while the plot and joke are relatively simple, this is how the generation before millennials understood the world in a cohesive manner. Memes transcend this by allowing one to break the cultural barriers because human mannerisms are far more colloquial.”

Many of the posts submitted to the page focus on topics such as common mistakes made by first-year students, the turmoil of exams and the rivalry between UMaine and the University of New Hampshire. On occasion certain memes will dig a little deeper, hosting conversations on university policy that may not be engaged in by such a large and diverse group anywhere on campus.

“It’s nice because we don’t get any bad political discussion,” Deagle said. “On campus, people have a lot of different views, but I feel like there is a time and place for everything. Like, if you want to joke about how the roundabout sucks, it could be considered political but it isn’t really partisan. People on the page will rant about some university decisions that are kind of complicated and pretty important. It’s not just making fun of stuff.”

Other than the occasional “salty comment,” the only backlash Parks and Deagle have received from the page came in an email from UMaine’s Division of Marketing and Administration in March of this year. At that time, the group’s cover photo featured the UMaine symbol and a picture of Vice President of Student Life, Dr. Robert Q. Dana. When they received an email from Margaret Nagle, the senior director of public relations and operations, requesting them to remove these images due to unauthorized use, they complied.

“Originally I was a little freaked out, but ultimately I think it totally makes sense why we can’t use it to directly advertise our group because we technically aren’t affiliated with the University,” Deagle said.

Now, to eliminate any further misassociation, this disclaimer is overtly displayed in the group’s description: “Not affiliated with the University of Maine cause the marketing department hates us.”

As Parks and Deagle get closer to graduation, they have a growing concern for who will run the page when they leave UMaine. Parks feels the only way they will find suitable candidates will be through a “Michael Scott style competition.”