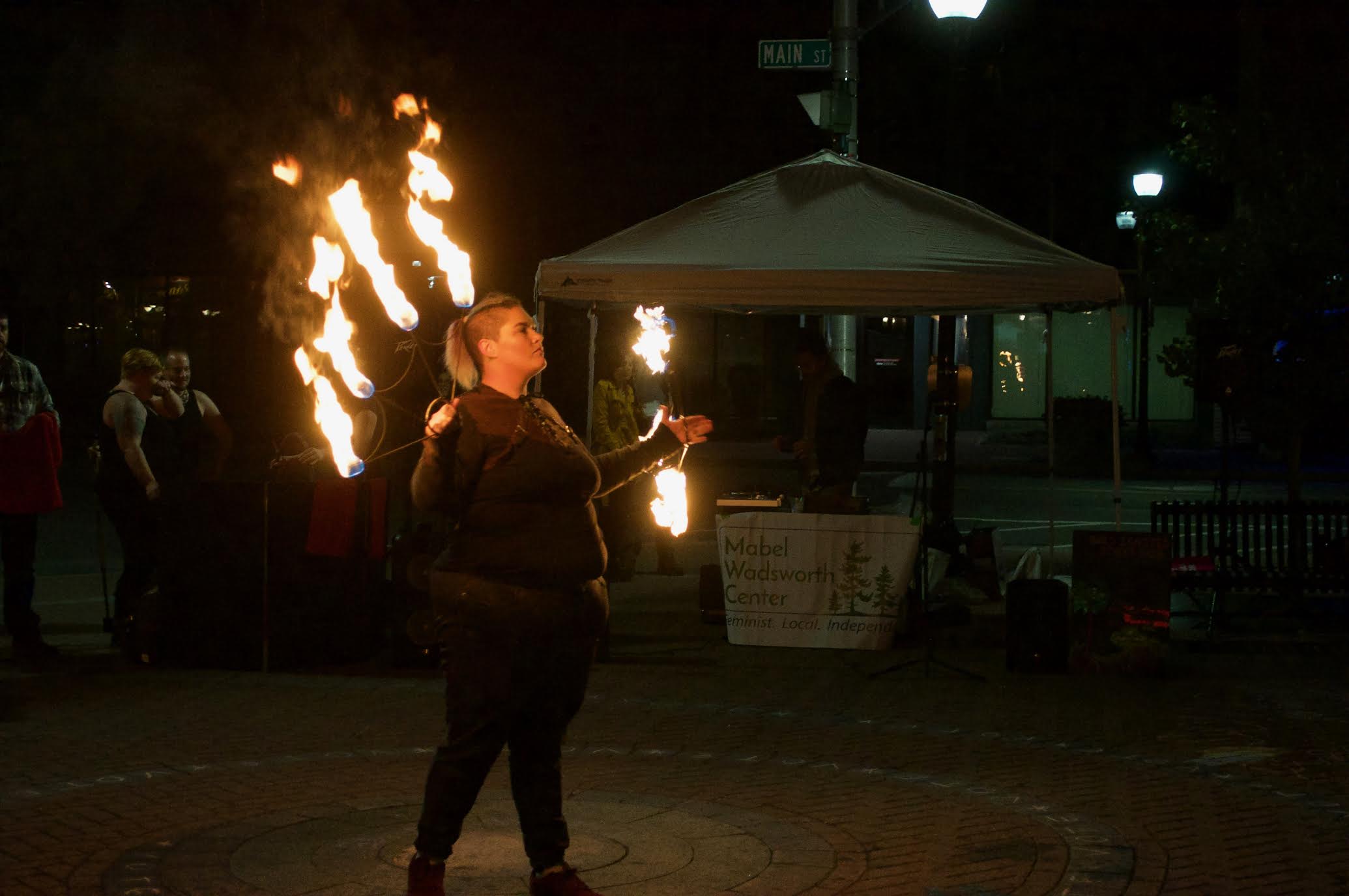 The fair aimed to raise awareness and take action against the Hyde Amendment and other policies that make it difficult for low-income Mainers to have access to affordable abortion care. This event comes as a sequel to last year’s event, the BOLD Future Street Fair.

A lawsuit by the American Civil Liberties Union (ACLU) against the state of Maine is currently underway. The ACLU claims that a constitutional right is being violated by the state by not paying for abortions through MaineCare.

The MWC’s partner companies such as Planned Parenthood Maine and Partners for Peace were present with information pamphlets and give-away swag. The tables formed a circle and music played to allow dancing throughout the night.

A photobooth to take pictures with “Sassy the Uterus” was set up and managed by the event coordinator Nik Sparling. Chalk was available to write encouraging messages on the square, some included “abortion is our right,” and “abortion is healthcare.” The word “vote” was also written many times.

At 7 p.m., music was paused and the event coordinators took to the microphone to give remarks. Among the speakers was Andrea Irwin, the executive director of the MWC.

“It’s really important that when things are this hard we continue to think about positive, proactive ways that we can keep moving our vision of justice forward,” Irwin said.

Irwin criticized MaineCare’s lack of coverage for abortion, emphasizing how many Mainers cannot get an abortion due to finances.

“We are punishing women with this policy, and we will not stand for it anymore,” Irwin said.

Sparling also spoke, discussing the positive atmosphere they were trying to produce through this event.

“Tonight is about us, about us all supporting each other. The news has been really hard to look at, as I think you know, so tonight is about creating a culture of passion, support, and love, for us and by all of us,” Sparling said.

While women hugged one another and posed for pictures with Planned Parenthood signs that read “Protect safe, legal abortions” some of the people passing were empowered and inspired. Julia Smith, a fourth-year student at the University of Maine and writer for Her Campus attended the event, and was moved by the positivity of the fair.

“It was truly something to witness such a strong group of people come together to support a great cause,” Smith said. “The atmosphere was so welcoming, and I was able to learn a lot about the resources offered in the Bangor area. The speakers were passionate about this cause, and clearly cared about their community.”

At 8 p.m., a local group of fire dancers called Dragon Keepers performed, with solo and group routines. They performed fire breathing, as well as articulate dances with batons and other instruments. Their flames spoke to the mood and theme of igniting visions.

For more information and resources visit the Mabel Wadsworth Center website at https://www.mabelwadsworth.org.