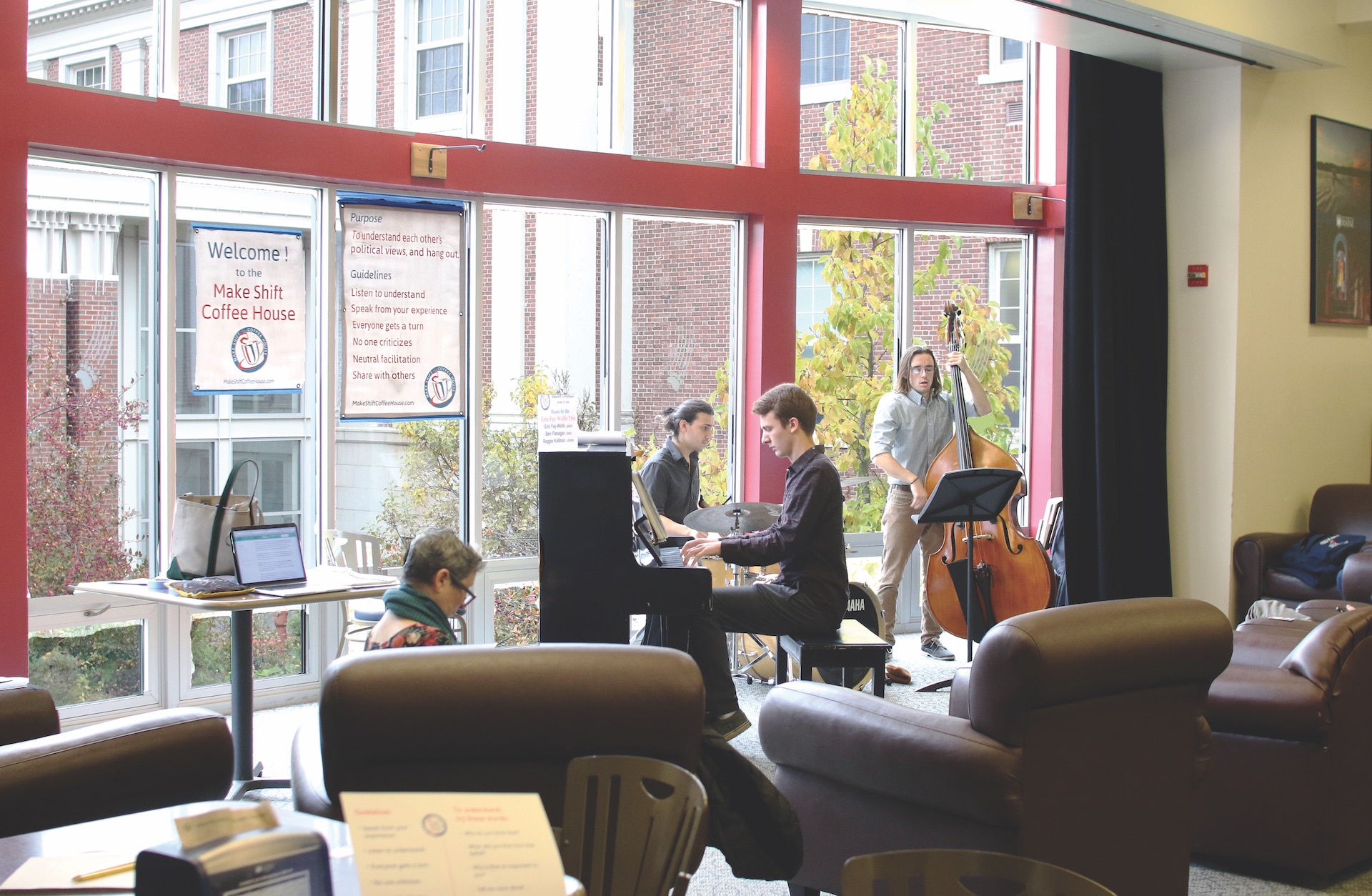 As snow began to fall outside of the windows of the North Pod in the Memorial Union on Oct. 23, a pop-up Make Shift Coffee House organized by the Rising Tide Center was held, where students were encouraged to talk to one another about voting and how they make their political decisions. Live music was performed by the Eric Fay-Wolfe Trio before the event and during breaks.

Before the event began, organizers handed out papers with the guidelines of the event and ways to ask questions in a non-defensive manner. Tips included speaking from experience, listening to understand, giving others time to speak, not criticizing, and sharing ideas.

The event was meant to serve as a space for students and faculty to discuss the current political climate and personal views in a productive way. Those in attendance represented different political parties and ideologies.

Included on the event flyer was a motto that read, “No need to persuade. No need to agree. No need to decide on what’s right. All that’s required is a desire to understand and a willingness to listen.”

After the trio wrapped up their set, the event kicked off. The moderator of the event was Craig Freshley, who once again outlined the guidelines and then opened the room up for the first discussion. The first to speak was Mitch Noland, a former student at Bates College in Lewiston, Maine. Noland dove into his reasoning on why he votes and is registered as a democrat.

“I vote based on these principles: morality, climate change, education and equality,” Noland said.

A major topic of discussion was the experience of growing up in a household with family members whose political orientation does not align with one’s own. In many cases, students admitted that they were raised in a very conservative Republican household and deviated from their upbringing and now identify as democrats.

“I was raised in a Republican household. I came [to Maine] and I switched,” Freshley said. “I was exposed to a deeper way of thinking and it altered my mind.”

“I’m from upstate New York and I grew up in a red district in a blue house,” Andrews said. “Coming to Maine from where I lived was a far different demographic. Many people that I’ve talked with that are on different sides of the discussion [political spectrum] feel that they’re treated the same way in terms of the name-calling, and I feel that a lot.”

Most of the opinions expressed throughout the event were held by those who identify as liberal Democrats. Freshley encouraged spectators with opposing views to speak up and voice their sentiments to the room.

After the initial discussion, Freshley broke the crowd into groups to have smaller discussions on specific topics by table. The group reconvened after this break to share final thoughts.

“You have to build the bridges in a common ground,” Andrews said.

“It’s hard to realize that any person saying anything has a whole bunch of different points of view,” Freshley said. “In the age of the internet, there is so much information coming out from so many different places and it’s so complex.”

Midterm voting will take place on Nov. 6 at the University of Maine New Balance Field House from 7 a.m. to 8 p.m. for Orono residents and UMaine students. Those who are not registered to vote on Election Day can register upon arriving at the polls. For more information on what to expect on the Maine ballot, please visit lwvme.org/guide.html.