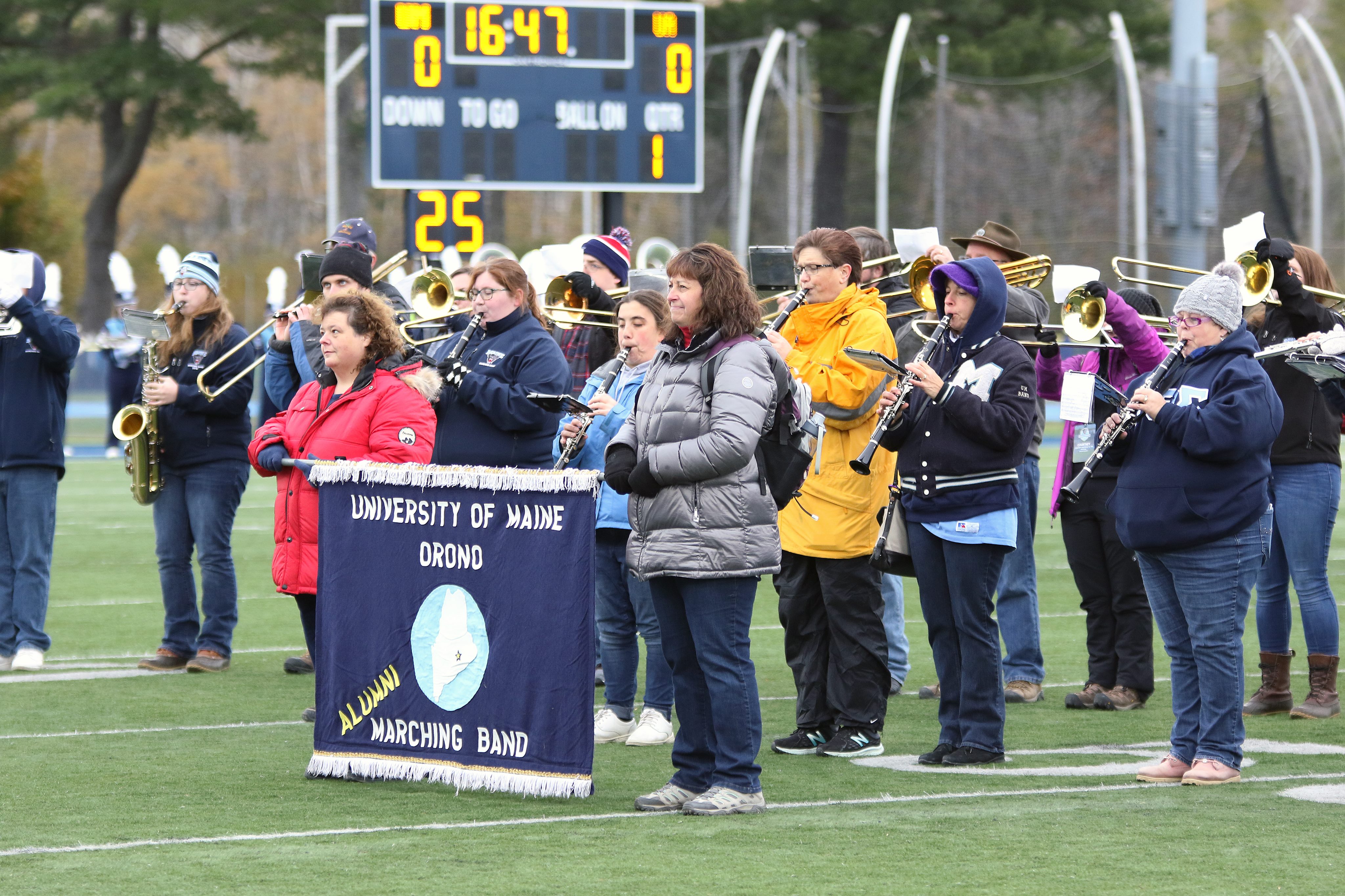 Homecoming brings students and alum together to celebrate the University Of Maine community. Photo by Matt Lavoie.

This weekend, Oct. 26-28, the University of Maine community gathered for one of it’s longest and proudest traditions: homecoming. Every year students and alumni anticipate tailgating at the football game, shopping at the craft fair and reconnecting through a variety of events held on campus. This year the election of homecoming royalty, a formerly long-standing tradition, was brought back to the weekend’s list of activities.

Originally started by UMaine’s honor societies, All Maine Women and the Senior Skulls, the election of homecoming royalty fell out of practice in 2013. This year, All Maine Women’s president, Rachel Harmon, saw an opportunity to bring it back. Austin Steward, a fourth-year biomedical engineering student and the president of the Senior Skulls, also played a role in reinstating the event.

“Rachel and I did a lot of groundwork and organization for this event; from creating the application, reaching out to Alumni, collecting marketing materials, and coordinating logistics,” Steward said. “I think the king and queen should represent the best of what the University of Maine has to offer. From service, involvement, and dedication to education.”

Students interested in being elected to homecoming court were instructed to submit an application and have a member of the UMaine community submit a letter of support. The court was selected on Oct. 14 and contained eight students with diverse academic and extracurricular backgrounds.

Ryan Pratt, a first-year management student was surprised when he made it onto the ballot. He believes that homecoming king and queen should not only have school spirit but also set a good example for fellow students.

“Though I haven’t been here long, I have quickly come to the realization that I am where I’m supposed to be! UMaine is so different than the perception it gave me when I was in high school. It’s such a fun and loving environment that is so accepting and alive,” Pratt said.

Annabelle Osborne, a third-year transfer student studying Journalism, was one of five candidates for homecoming queen. She was excited to spend the weekend enjoying the festivities as well as tabling for Wilde Stein at the open house.

“I heard that I was selected while in math class and I was beyond excited! Having been homeschooled my whole life, I never thought I would have the opportunity to run for something like this,” Osborne said. “I think that this tradition is worth bringing back because it allows the student body to get involved. I know that homecoming is many people’s favorite time of year, and it’s really cool to be able to be involved in a more complete manner.”

On Oct. 18, students were invited to cast their vote in-person at a table in the Union or through an online forum. Votes were validated through the use of each students university email address. The results were considered in conjunction with evaluations from an alumni panel once voting had closed.

The excitement and school spirit of all in attendance was not stifled by the onset of inclement weather at Saturday’s football game against the University of Albany. At the end of the 3rd quarter, fourth-year students Tommy Giggey and Maylinda Boynton were crowned this year’s homecoming king and queen.

Boynton, a music education and political science student, considers UMaine to be her home away from home. This sentiment has rung true since first coming to UMaine for band camp in sixth grade. She continues to spread school spirit on campus as a member of the Pride of Maine Marching Band.

“[The tradition] is a true marker of what Homecoming is,” Boynton said. “Homecoming is about celebrating with your classmates what an incredible university we attend and sharing that experience with the thousands of visitors and alumni that come to campus on this historic weekend every year. I think it’s a way to recognize students who are making a difference on campus rather than just recognizing students for their popularity… I have loved every second of my time at UMaine and I’m honestly not ready for it to end.”

Giggey, a business administration and psychology student, believes that at UMaine you get out what you put in. Giggey’s belief in this sentiment is demonstrated through his vast involvement on campus ranging from his role as fraternity chaplain for Alpha Tau Omega to his job as business manager at The Maine Campus.

“I am so honored to have been selected at my senior classes Homecoming King,” Giggey said. “I was very excited to learn that the Senior Skulls and All Maine Women were bringing back the tradition of Homecoming Royalty. Bringing back old traditions and keeping those that have happened for many years creates a sense of comradery across many generations which will hopefully lead to relationships that last well beyond our four years at the University.”

Receiving this honor gave both Boynton and Giggey a strong sense of pride. As they move closer to the end of their academic careers at UMaine, they look forward to the events which will give them a reason to return.

“This memory will be a defining moment of my last year at UMaine as well as giving me one more reason to return every year. To the college of our hearts always!” Giggey said.