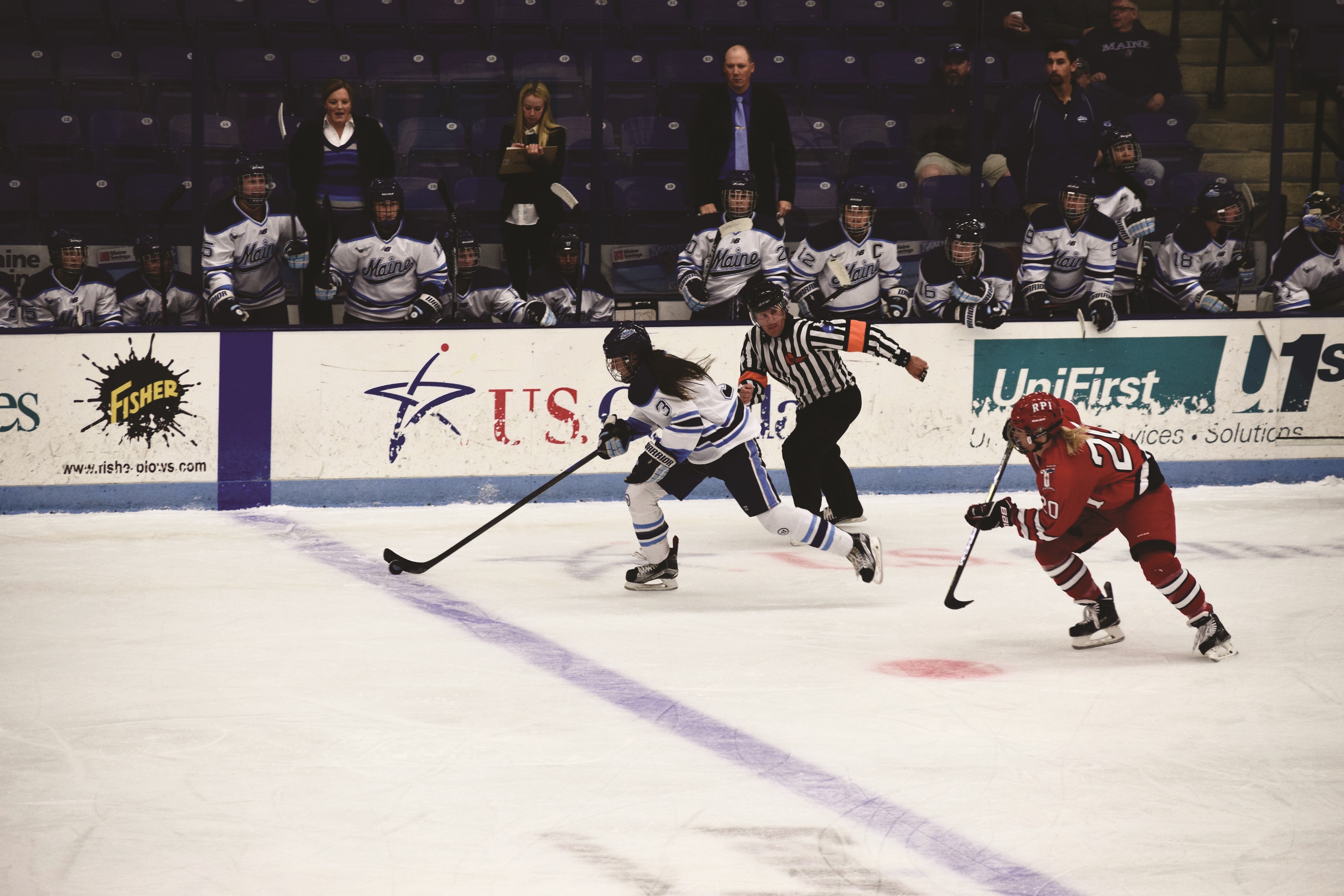 The University of Maine Women’s ice hockey team put on a clinic Friday and Saturday night against the visiting Sacred Heart University Pioneers. The Black Bears shut down the Pioneers on defense while easily navigating the opponent’s goal. Both games resulted in a score of 8-0, giving the women’s team an impressive 4-0 record, a promising start which will hopefully continue through the season.

The team’s first game against Sacred Heart University started off quickly with plenty of shots on the Pioneers’ goal in just the first few minutes. It wasn’t until 12 minutes had passed that Maine scored its first goal. This goal was scored by first-year forward Ali Beltz as she raced to split the defense and have a one on one with Pioneers’ goalie Sarah Erban. This was the first goal of Beltz’s college career.

The second goal of the night, and last of the first period came from first-year forward Liga Miljone. Miljone pushed towards the right side of the goal as she took a shot but had it deflected. First-year forward Celine Tedenby chased down the puck and masterfully passed back to Miljone for a shot on an off guard Erban.

The second period is when the Black Bears’ offense really came to life. Just 26 seconds after the puck was dropped, third-year Tereza Vanisova maneuvered her way down the ice before sending a shot into the back of the net, pushing the Black Bears to a 3-0 lead. The assist for the goal was thanks to Miljone, who crossed the puck through traffic and directly into Vanisova’s stick.

This goal was followed by first-year Ally Johnson, who got the puck off a turnover and took off down the ice before finding her way past Erban for the score. This was also Johnson’s first collegiate goal. Shortly after Johnson’s goal, UMaine found the back of the net again thanks to second-year Daria Tereshkina. Tereshkina was assisted by Miljone and scored with precision.

The Black Bears didn’t give the Pioneers much time to react after this fifth goal, with third-year defender Brittany Colton showing her versatility and scoring. The fifth and final goal of the period was by far the most exciting to watch however. Second year forward Maddie Giordano passed the puck, behind the Pioneers’ net, to fourth-year Cailey Hutchison, which Hutchison then wrapped around the net to pass the puck right through the goalie’s legs.

With such a large lead going into the third period, the Black Bears began to ease off the offensive slaughter. The Black Bears concentrated on an already formidable defense, not allowing the Pioneers to make any real plays on net, and only allowing one shot for second-year goalie Loryn Porter to save. The only goal from the period was scored by Tereshkina off of a power play and assist by Vanisova.

The dominant performance gave the Black Bears confidence going into game two, allowing them to repeat the following night. With the Black Bears at home, they were able win 8-0 again to close the series 2-0. Much like Friday’s game, UMaine’s offense went out onto the ice strong with a total of 42 shots on goal. While unable to match the previous night’s shot total, the Black Bears proved to be more efficient with their shooting Saturday night, scoring eight goals on 42 shots in comparison to eight goals on 52 shots the previous night.

The game started out much faster for the Black Bears, who scored less than 4 minutes into the first period. The goal was scored by Miljone who scooped up a rebound from a shot fired by fourth-year defender Alyson Matteau. The next goal was scored just a few minutes later by third-year forward Vendula Pribylova off a pass by Tedenby. Pribylova scored again in the last minute of the period off of a power play.

As the Black Bears entered the second period it was clear that they were taking over the game. This was made clear by how busy the Pioneers’ defense had become. In the first few minutes of the game the Pioneers couldn’t stop the Black Bears from shooting on their net, but it wasn’t until 2:33 that the puck made its way in. This was thanks to a break away from Vanisova on a Pioneers turnover, who proceeded to send the puck sailing past Erban, reminiscent of the previous night for both players.

Colton, Tedenby and third-year forward Lydia Murray all scored in the second period to bring the Black Bears to an overwhelming 7-0 lead going into third period. This was deja vu for the Black Bears as they sat comfortably in the lead with the 4-0 record in their grasp.

The third period was a carbon copy of the previous night, with the exception of SHU’s offense sputtering to life. Although the Pioneers had many chances, they weren’t able to sink one in to get on the board. The Black Bears were able to score one more off of a power play. Beltz was able to fend off the Pioneer defense as she took the puck from in front of the goal and sent it in.

With an undefeated record and three clean sweeps in a row, the Black Bears hit the ground running to start the season. UMaine will travel to Boston this week to play against Northeastern University in back-to-back games on Friday at 2 p.m. and Boston University Saturday at 4 p.m.