Gay Thanksgiving Provides a sense of Community for LGBTQ Students 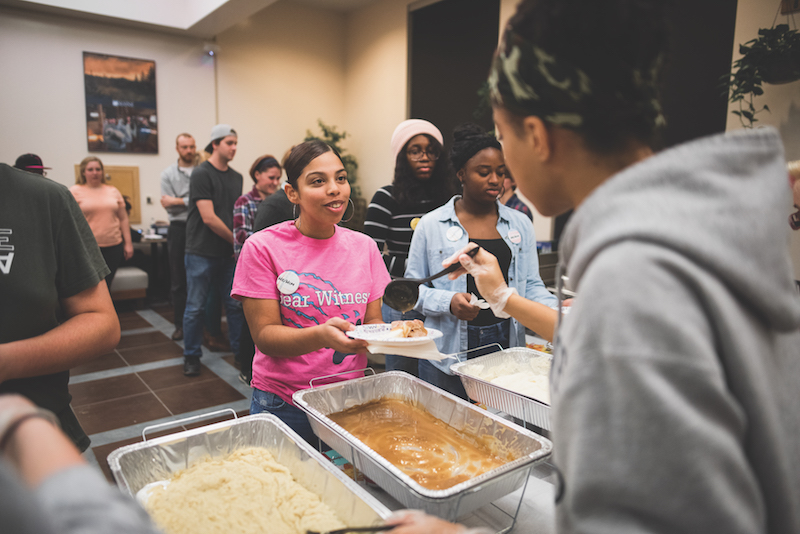 On Thursday, Nov. 8, Wilde Stein hosted its annual Gay Thanksgiving dinner in the North Pod of the Memorial Union. The dinner, which has been a staple event for Wilde Stein and the LGBTQ community since the 1970’s, has allowed hundreds of students to come together for a Thanksgiving meal when going home for the holidays isn’t an option.

Wilde Stein, the University of Maine’s Queer-Straight Alliance, is celebrating its 45th year on campus. Every year, the group contributes time and hard work to provide a Thanksgiving meal for the LGBTQ community to share together. Wilde Stein started as a small student group and is one of the oldest queer-straight alliances in the country. Shortly after its inception, the group saw the need for an event where students could gather and enjoy Thanksgiving, especially if they weren’t being accepted at home.

“Gay Thanksgiving is probably our most popular event,” Jane Pappas, a graduate assistant and Wilde Stein advisor, said. “Last year we had upwards of two-hundred people which makes it our biggest event of the fall semester. There’s something really powerful in sharing a meal together, and a lot of people within the LGBTQ community find themselves with no place to go, especially around the holidays. So, this event provides that sense of community that a lot of people, unfortunately, don’t have.”

This year once again saw an attendance of about two hundred people.

“For me, it’s really the community here at UMaine that makes this event so great,” Annabelle Osborne, a third-year journalism student, said.

One of the things that makes Gay Thanksgiving such a wonderful event, other than the plethora of turkey and mashed potatoes, is the inclusion of guest speakers. This year, Gia Drew, the Program Director for Equality Maine, came and spoke about the importance of events like this.

“When I came out as transgender about seven or eight years ago, my family turned their back on me, and that was really difficult to not be welcome at home for holidays,” Drew said. “Over time, we’ve re-acquainted, but that’s why tonight’s event is so important to be together, show our love and respect for one another, and enjoy this meal while also remembering that there’s still a lot of work to do.”

Equality Maine was founded in 1984 and has been a huge program for the LGBTQ community in Maine ever since. Maine was also one of the first states to pass an anti-discrimination law, a huge step forward for the states’ LGBTQ community.

“I’m trying to put myself out of business, I want everyone to be able to enjoy life freely without the constraints of harassment and bullying,” said Drew.

For more information about Wilde Stein, Gay Thanksgiving and other events, stop by the Rainbow Resource Center located in the Memorial Union.