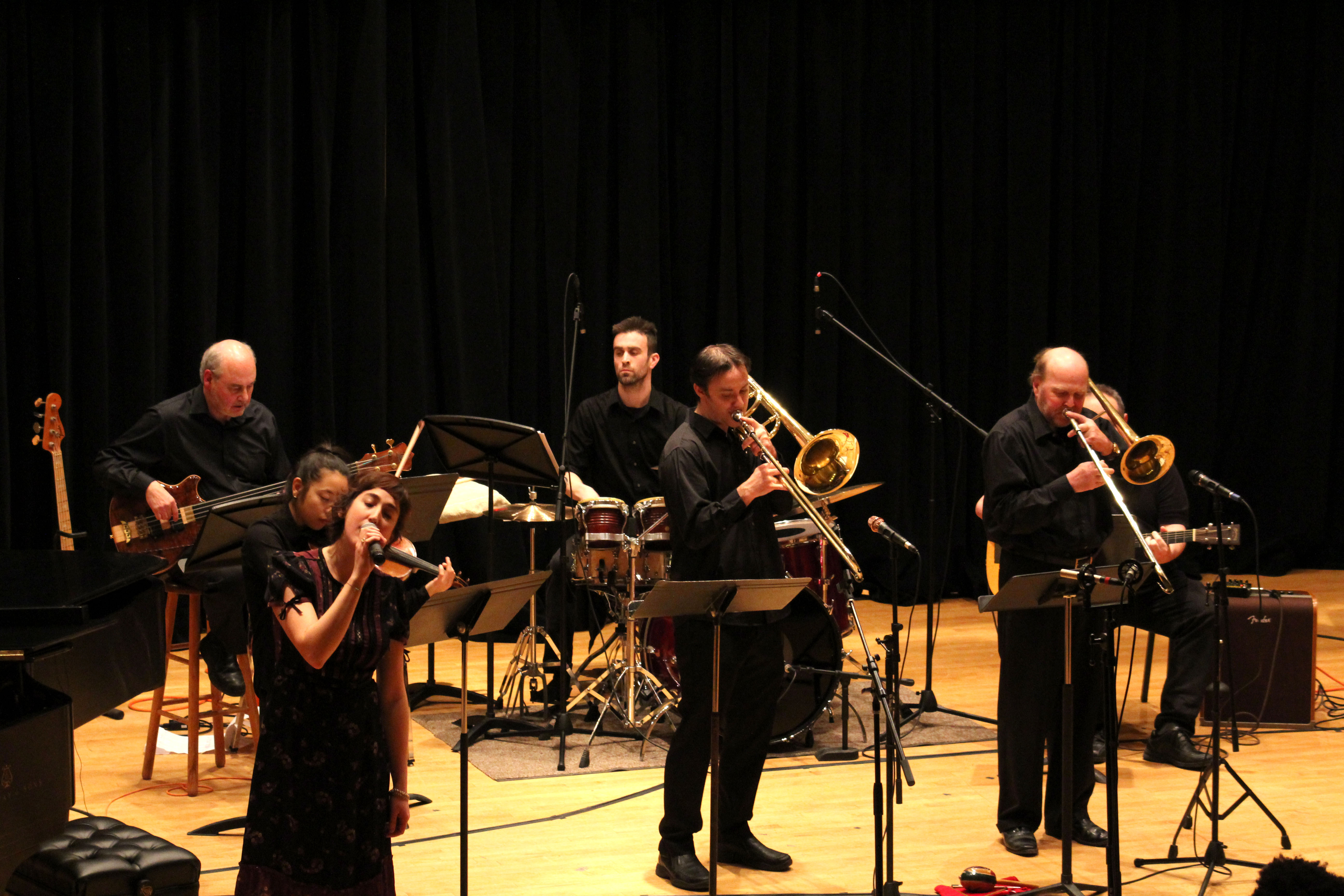 Students and faculty of the UMaine School Of Performing Arts perform at the Joni Mitchell Tribute Concert. Photo by Antyna Gould.

On Tuesday, Nov. 13, members from all across the University of Maine’s music program came together for a tribute concert in celebration of Joni Mitchell’s 75th birthday. The evening began at 6:30 p.m. with a pre-concert lecture in the Collins Center for the Arts Bodwell Lounge hosted by Dr. Dan Sonenberg followed immediately by a free concert in Minsky Recital Hall. The concert featured the UMaine Renaissance, The Maine Steiners, Euphony, faculty and students from the school of performing arts and featured vocalist, Sara Hallie Richardson.

Sonenberg is a life-long fan of Mitchell’s catalogue and even wrote his dissertation about her. His lecture gave attendees an in-depth look at how Mitchell composed her music and how it has cemented her legacy as one of the greatest guitarists of all time.

“Her composition approach was so different, and her music always moved me,” Sonenberg said.

Despite only being listed as the 75th greatest guitarist of all time by Rolling Stone magazine, Mitchell boasts an impressive and unorthodox playing style in which almost every song she played implemented a different guitar tuning. This style, as Sonenberg emphasizes, is truly inventive and sets her apart from other artists of the time such as James Taylor and Paul Simon.

Not only is she considered to be a great guitarist but a lyricist as well, often being compared to Bob Dylan, whom she was inspired by lyrically. Sonenberg demonstrated Mitchell’s playing style on the guitar throughout the lecture, giving attendees a close look at how she played and wrote her songs.

“I always knew she was a great guitarist, but I couldn’t believe what I was seeing. I was contorting my hand when I went to learn one of her songs,” said Sonenberg.

Sonenberg also detailed Mitchell’s public image and the strangeness surrounding it. She wasn’t one to shy away from controversy or try new styles of play. In particular, Sonenberg provided a nice commentary on the album Mingus in which Mitchell collaborated with American jazz musician, Charles Mingus and the somewhat infamous cover of her album Don Juan’s Reckless Daughter.

After the lecture, audience members were invited to attend the Joni Mitchell tribute concert in Minsky Recital Hall. The concert featured a variety of songs from Mitchell’s catalog including “For Free,” “The Circle Game” and “Big Yellow Taxi” from her album “Ladies of the Canyon,” and “Both Sides Now” from “Clouds.”

Portland based singer and songwriter Sara Hallie Richardson preformed as the concert’s featured vocalist, taking the lead on many of the selections. Her rendition of “The Circle Game” encouraged the audience to sing along with her as the evening came to a close. The Maine Steiners also performed an acapella rendition of “Big Yellow Taxi” that had the entire recital hall moving to the music.

Renaissance performed “Fiddle and the Drum” from “Clouds” collaborating with alumni, including Richardson.

“It was definitely less challenging than usual because it was only one song, but it was also one of the most exciting because we were able to come together with alumni to revive a song a decade later,” said Mari Smith, a Renaissance member. “While we were waiting to go on, the alumni performed a song for us that they sang when they were in the group and they sang it just like they did ten years ago. It’s amazing how music can create experiences that stick with you for years to come!”

To learn more about events like this, visit the Collins Center for the Arts or search for University of Maine School of Performing Arts.

Men’s Hockey goes 1-1 on the road, gets swept at home
UMaine Women’s Basketball Proves Hard Work Can Still Be Rewarding