Party at the Polls event prevails through the rain 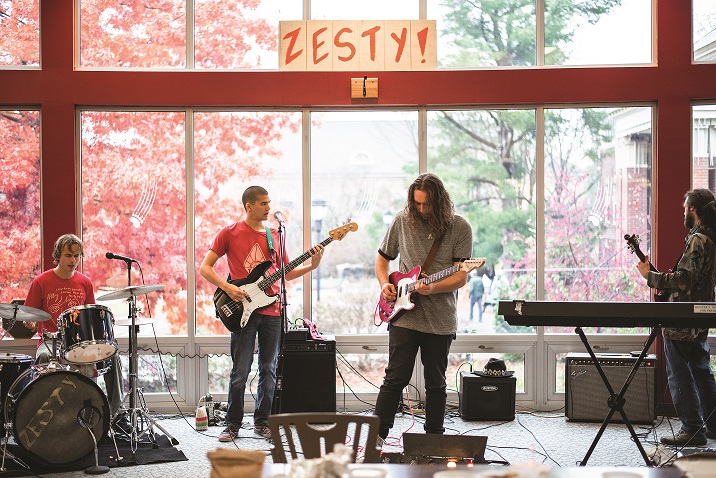 The rain didn’t stop students from going to the polls on Tuesday, Nov. 6, and it didn’t stop the University of Maine Feminist Collective from hosting its Party at the Polls event on campus to promote student voting.

Meghan Frisard, a fourth-year zoology and women’s gender and sexuality student and the president of the UMaine Feminist Collective, helped organize this event. She said the group wanted to develop an event that would give information on voting to students and encourage them to vote in a fun and entertaining way.

“We think that there are a lot of issues that people care about and that we care about as an organization,” Frisard said. “I think we are in a really unique place to do this in Maine because we have same-day voter registration [and] because the voting place is right on campus. That makes it a lot easier for students to get out and vote.”

The event started off with a one-hour delay and venue change from the Stewart Quad to the North Pod of the Memorial Union. Organizers served free food from Moe’s Original BBQ while the Maine band Zesty played funk music.

Remus Andersen, a second-year business student and member of the Feminist Collective, convinced some students at the event to vote and provided information to others who were unaware of their voting eligibility.

Judith Astumian, a third-year sustainability and agriculture student at UMaine, already voted before attending the event, but she enjoyed drinking free Dunkin Donuts hot chocolate while listening to the band in the North Pod.

“I think voting is important for people in their twenties because they have to put up with the world for their whole future,” Astumian said.

The rain poured harder as organizers and volunteers moved to Stewart Quad, huddling under tents, after the band left. They had to cancel a planned fire dancing group called the Dragon Keepers, who were scheduled to perform around a bonfire. Students passing by took refuge from the weather and ate free pizza from Dominos to celebrate Election Day.

After the rain lightened they moved to a space across from the university Mall in front of the black bear statue. Volunteers gave out information about out-of-state student voting rights and reminded people about same-day voter registration.

The New Balance Field House was filled with students and Orono community members as people waited in lines that wrapped around the center of the Field House. It’s one of the only buildings in Orono that is big enough to hold voting, according to Orono Town Clerk Shelly Crosby.

“The New Balance Field House has really allowed us to streamline and organize events so voters have accessibility. This facility being able to handle that volume (9,500-10,500 people) is a benefit to the town of Orono,” Crosby said.

She credited student volunteers, saying the event wouldn’t be possible without their involvement.

Crosby said town officials handled 2,200 people at the voter registration table in the 2016 election.  This year they saw over 1,400 people, which is a much higher turnout compared to previous midterm elections, according to Crosby.

“The Curious Savage” and the perception of sanity
OHOP’S Buffalo Chicken Pizza Satisfies on all Levels.