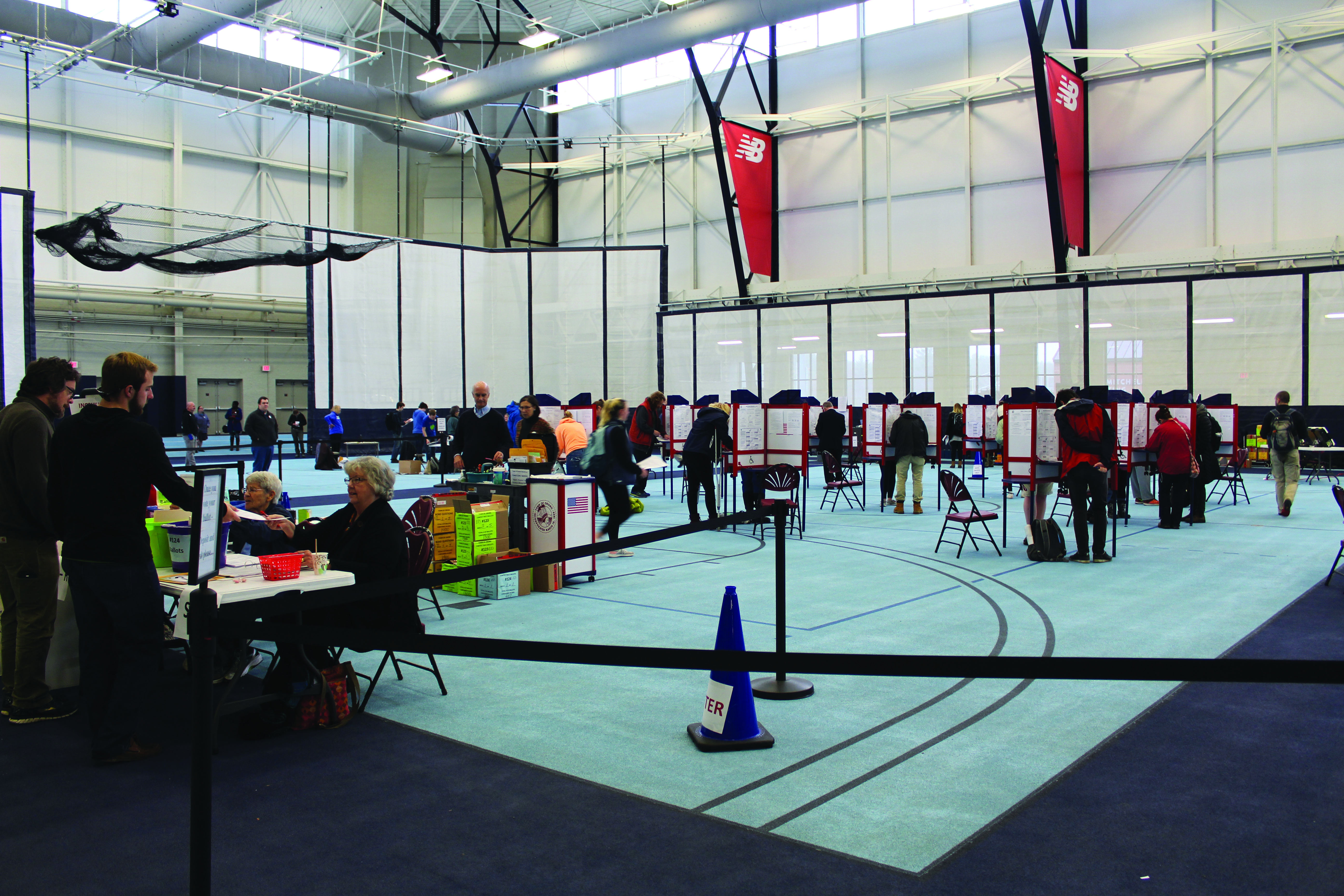 It was a cloudy, rainy Election Day on Tuesday, Nov. 6. Students dodged puddles and hurried into the immense belly of the New Balance Memorial Gym to vote. Despite the stormy weather, the polls saw an increased number of voters in what many considered to be a successful election on campus.

“Anyone who was at the polls can see that [students] were turning out in numbers that were significant,” said Rob Glover, professor of political science and one of the principal directors of the University of Maine Voter Activation Network. “To see such strong turnout despite a really gross, rainy day was fantastic.”

The Voter Activation Network group coordinated political engagement efforts between students and faculty at UMaine during this year’s election season.

This year, the members of the group directly reached out to roughly 3,000 students, Glover estimates, through club and class presentations. He said these efforts contributed to a successful Election Day.

“I was most excited to have so many members of our campus community volunteering to help get out the vote and to assist the town in administering the election. We had dozens of volunteers engaged in this effort,” Glover said.

Orono Town Clerk Shelly Crosby echoed Glover’s sentiments. For her, Election Day was a chaotic 12 hours of shuffling around the Memorial Gym, registering new voters and trying to keep lines moving quickly. According to Crosby, 4,404 ballots were cast in person and 1,200 absentee.

This represents a nine percent increase from 2014 in the number of registered voters who cast ballots in a midterm election and referendum in Orono, according to statistics provided by the town of Orono.

Processing all of the absentee ballots was one of the day’s biggest challenges, Crosby said, but volunteers from Student Services and the Political Science Department pitched in to help with the workload.

“Students attended mandatory training and worked [alongside] appointed election clerks and registrars to handle the volume of tasks both before, during and after the election,” Crosby said. “This process was widely successful and will certainly be repeated in the future.”

It wasn’t just on the organizational side where students came out to help. Animated by national political fervor, some students showed up to vote with a clear purpose.

Fourth-year psychology student Lanie Howes said that she was most concerned about reproductive rights and noted that she was casting her vote in light of the recent confirmation of Justice Brett Kavanaugh to the Supreme Court.

“I’m hoping to elect officials that care in some capacity about human beings rather than simply tax money,” Howes said.

Others also emphasized that they were interested in voting for officials who represented their interests, and political orientations fell to both sides of the aisle.

Josiah Paradis, a fourth-year music education student from Belgrade, Maine, talked with his family members back home and professors in order to get a better sense of how to vote.

“I would like to see another Republican governor,” Paradis said. “Maybe not quite as brash as Paul LePage … but I’d definitely like to see things continue that way.”

While students like Howes and Paradis and members of the community waited in line to vote, students outside the Memorial Gym celebrated the day, handed out information and directed those registered to the polling location.

This nonpartisan event, Party at the Polls, was organized by the Feminist Collective and sponsored in part by Student Government. Student volunteers tabled throughout the day, fielding questions and handing out free pizza to those sporting an “I Voted Today” sticker.

This year, through the coordinated effort of members of the Voter Activation Network, roughly 3,000 first- and second-year students were given the opportunity to register to vote and told about their rights as voters.

“Honestly, I was most concerned that those we’d registered wouldn’t turn out to the polls,” Glover said.

Glover said that, going forward, he hopes to help engage UMaine students even further in the political process. With sights set on 2020, he wants even more student-led volunteer efforts on Election Day and, of course, for more students to come out and vote — both this year’s keys to success.