“The Curious Savage” and the perception of sanity 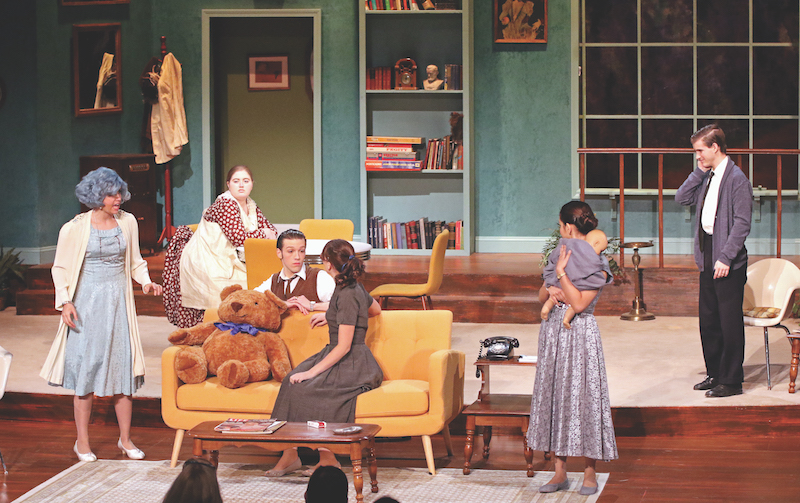 The School of Performing Arts puts on the Curious Savage in the Hauck Auditorium. Photo by Matt Lavoie.

Written by John Patrick, the comedy is set inside The Cloisters, a psychiatric facility. The strange cast of patients includes a compulsive liar, a fearful man who hides from the world and a statistician turned terrible violinist. When Ethel P. Savage arrives, life in The Cloisters changes for everyone.

Ethel P. Savage, known as Mrs. Savage throughout the play, is a wealthy, bright blue haired widow whose stepchildren have had her committed because they want the money from her husband’s death for themselves.

They have checked her in on the basis of “eccentric” behavior, like dying her hair blue, carrying a large teddy bear with her everywhere she goes, becoming an actress and her plans to use the $10 million left behind by her husband to help regular people achieve their wildest dreams.

“My favorite thing about the play is how sincere every character is. They are so committed to the world that they create for themselves. I love how the play questions what motivates a person, and how these motivations can be positive or negative,” said Katie Dube, the third-year secondary education student who plays Savage.

The play has not been in the works for very long, but the cast and crew have put in many long hours producing the show. Auditions began in early September, and rehearsals began on Sept. 24. Despite this brief window, the cast and crew have had many opportunities to get to know one another and their characters.

“The most rewarding thing about the play is the fact that we were able to put it together in a little over a month. We have all worked very hard to make this story possible, and perform it with sincerity,” said Dube.

Putting on a play is a lot more work than many people believe. The time commitment is tremendous, but for the cast and crew of “The Curious Savage,” it was worth it.

“For me, some of the biggest challenges were balancing school work, classes and relationships with rehearsal and memorizing my lines,” said Dube. “It was also very hard not to break character during rehearsal and start laughing on stage during several of the play’s comedic moments. Overall, I am incredibly thankful for all of the support I have.”

“The Curious Savage” was written with the intent of exploring the human experience and what insanity really means. In the foreword to the play, playwright John Patrick wrote: “It is important in ‘The Curious Savage’ that the gentle inmates of The Cloisters be played with warmth and dignity. Their home is not an asylum nor are these good people lunatics. Any exaggeration of the roles will rob them of charm and humor. The whole point of the play is to contrast them with Mrs. Savage’s children and the insane outside world. To depart from this point of view for the sake of easy laughs will rob the play of its meaning.”

As the show progresses, both the audience and Mrs. Savage become accustomed to the way life is at The Cloisters and the quirks of its residents. The patients are given the opportunity to be seen the way they see themselves.