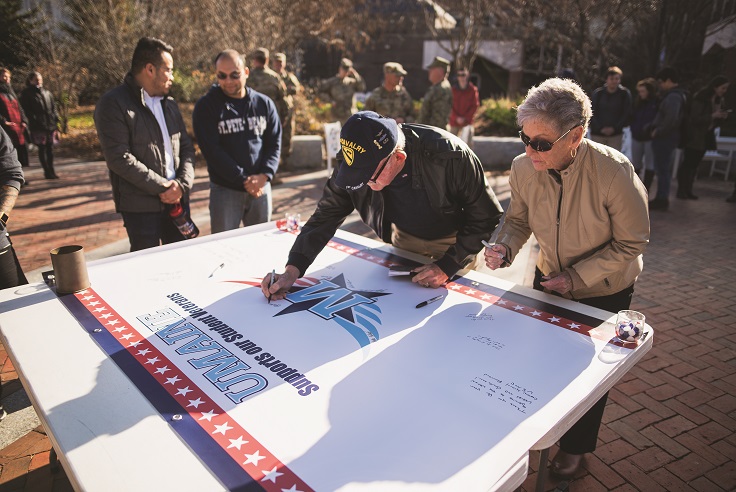 In the lead up to Veterans Day on Nov. 12, the University of Maine celebrated a week of events to recognize veterans. This week featured two lectures, a veterans BBQ and a ceremony hosted by the Old Town chapter of Veterans of Foreign Wars (VFW). The week culminated with an unveiling of the Digital Book of Memory on Nov. 9, a database containing information about and photos of UMaine’s 261 fallen veterans.

“We try to hit the recognition portion from both angles, which is why we’ll sometimes do events that are memorials to honor the veterans that came before, and then we’ll also do outreach programs, like the BBQ,” said Tony Llerena, coordinator for UMaine Veterans Education and Transition Services (VETS).

According the the U.S. Department of Veterans Affairs GI Bill comparison tool, UMaine currently has 396 students taking advantage of GI Bill benefits. Llerena noted that there are more veterans studying here who choose not to identify themselves, either for fear of being “judged” or for other personal reasons.

He said that this week was all about the community’s coming together for those service men and women — both the ones who are officially recognized by the university and those who are not.

“We try to come up with different events that can create outreach, recognition that student veterans are on campus, they’re in your classes and they’re valuable to this community,” Llerena said.

A major component of this week’s outreach effort, the principal event on Friday, was the unveiling the of the digital Book of Memory.

The original book was created 1946 after World War II in order to remember UMaine’s alumni who died in previous wars. Llerena said when he took his position as coordinator of VETS, he was told that one of the only copies of the Book of Memory had been stolen from the Memorial Room in the Memorial Union some years prior. The remaining book was locked away in a secured cabinet.

For a time, it appeared that there would be a gap of information about UMaine’s fallen veterans. But then a new copy was discovered in Raymond H. Fogler Library’s Special Collections.

“We didn’t know there was a book with pictures until Margaret Nagle from Marketing said ‘hey, this might be of interest to you,’” Llerena said. “We sat down and we created the database and we started transcribing all 181 biographies, and we started adding all the names we had from the Spanish-American War, World War I.”

Then, four years ago, after a reading of fallen veterans names on the steps of Fogler Library, Llerena got a call from a Korean War veteran.

“He said ‘you forgot my war,’” Llerena said.

The man provided Llerena with three names of his fallen fraternity brothers who died 50 years prior. Another reading was held for the new names, and Llerena realized that a continuous and evolving medium would be useful to keep a record of new UMaine fallen veterans who came to light.

This was the beginning of the digital Book of Memory project, which was compiled and organized over the last two years.

Finding information about UMaine’s fallen veterans is now as easy as typing in a hometown, name or war. And for Llerena, years of work have come to fruition.