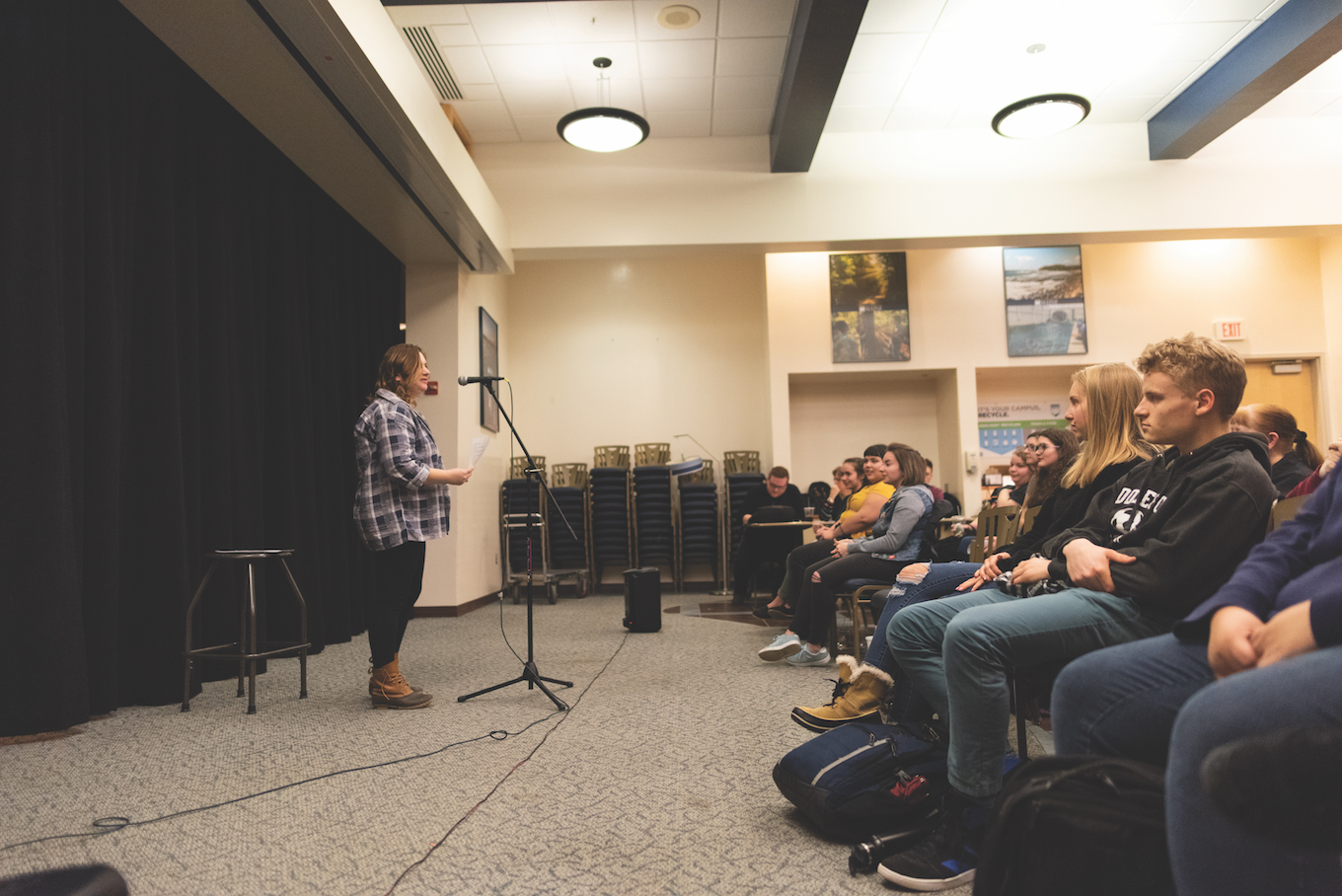 On Thursday, Dec. 6 the University of Maine’s Campus Activities Board (CAB) hosted a poetry slam in the North Pod of the Memorial Union. The slam featured six UMaine students who shared their original poetry in a three-round competition.

CAB has been hosting their bi-annual poetry slams since the spring of 2014. To perform, interested students submitted three poems ranging between two and three minutes in length for consideration. Between each round, audience members mingled while judges reflected on and scored each participant.

Grover welcomed the audience and introduced each round by performing his own readings which included Neil Hilborn’s “Joey,” and original works “Alternative Facts” and “Leg Dreams.”

“Giving students who want to read [their poetry] someone to read to is so much more important than you think,” Grover said.

“There is a vital community of student poets and performers on this campus who contribute to the artistic life at the University of Maine,” Cowan said. “These students come from all majors. Their interests and backgrounds are diverse. There was a community of students who already knew each other at this event, but in the breaks between the rounds of poetry and in the conversations between audience members, I could see this community absorbing more people and inviting more people into its ranks. It was an open, inclusive space.”

Jennifer MacArthur, a fourth-year secondary education student, took home third place. The first poem she performed, titled “College,” she had written that morning. The poem was a rumination on the collegiate experience and included reflections such as: “Failure doesn’t get you on mom and dad’s fridge.” Her second poem was titled “The wolf who cried girl,” and her third poem described personal experiences of working at a casino.

Cara Morgan, a fourth-year English student, was awarded second place. Morgan’s poems discussed many facets of mental health, eating disorders and sexual assault. Morgan uses her gift to reflect on her own past and to manifest a better future. The emotion of her poetry was embodied in a line from her first poem which stated, “broken is just a word, not a name.”

“I was particularly impressed by the intellectual, emotional, social depth and range of these pieces,” Cowan said. “These are students who are willing to write about controversial and sensitive personal, social, and political subjects. They treated these subjects with nuance and sophistication. I was personally impressed. It made me proud of our University of Maine students. They are dealing with vital social and political issues in compelling ways. And by sharing their art, they are helping their community think about these subjects.”

Nola Prevost, a second-year English student, was awarded first place. Prevost’s first piece, titled “On softness,” described a dream like conversation with her therapist, and took the audience on a journey through her mind.

“Honestly, what inspires my writing is life,” Prevost said. “The nitty gritty, the happy, the sad, the crazy, the honest. Everything I write is something I’ve personally experienced, and things that have lived so long in my mind that I have to get them out on paper… Poetry has helped me get through my anxiety and depression. It’s a way for me to conceptualize my worries outside of my head.”

Her other two contributions included “From the photon” and “From the glass half full.” While varying in subject and tone, these three works gave the audience insight into how Prevost sees the world.

“Nola’s pieces combined well the many aspects of poetry slam pieces. Her language and figures of speech were original,” Cowan said. “Nola’s pieces had memorable lines that made you look at her subject in new ways. Her pieces were often about emotions that were common to many audience members. Her ‘performance’ itself was also lively with quite a bit of variety. I loved the ‘lilt’ in her voice at special moments in all three pieces.”

Grover, Cowan and Prevost all expressed how important events like this are on campus, not only for poets but other members of the student body as well.

“It’s important to host events like this on campus because it gives people like me a space to share these personal experiences,” Prevost said. “It’s not easy to put your emotions on display, even if it is through poems. But doing it, performing and sharing these innermost thoughts and feelings, no matter how light or dark, is freeing.”